Water, for StoriesBest known for co-creating the delightfully eldritch Sunless Sea, Alexis Kennedy is no stranger to haunting storytelling. Before you delve into his latest game Cultist Simulator, take some time to read this insightful blog post about how he challenged himself to keep the text short but sweetly tantalizing.

Cultist Simulator's a game about being the antagonist in a horror story - the kind of antagonist who we sometimes cheer in preference to the hero, and the kind of horror story that stays with you when you wake the next morning. It's also a simulation game, and a card game, but above all it's a story game. So there are words in it.To be precise, there are seventy thousand words of content in Cultist Simulator. The last game I launched on GOG, back in my Failbetter Games days, was Sunless Sea, and that had two hundred and fifty thousand words in it. I've fallen short of my goal, but not in the way you might expect. I was very definite that I wanted Cultist Simulator to have about 25% of the words in it that Sunless Sea did. I wanted to top out at sixty thousand at launch. Why?Boring answer first: it's cheaper to localise shorter games, indie studios don't have much money, and we want to localise CS. Okay, but that is a very boring answer, and it's the least important one.Emotional answer. I didn't write all of Sunless Sea - maybe it was two-thirds, maybe three-quarters - but that was still easily three novels worth, and bloody hell, by the time I'd done, that was a lot of typing. This time round, I wanted to spend less time typing and more time designing. 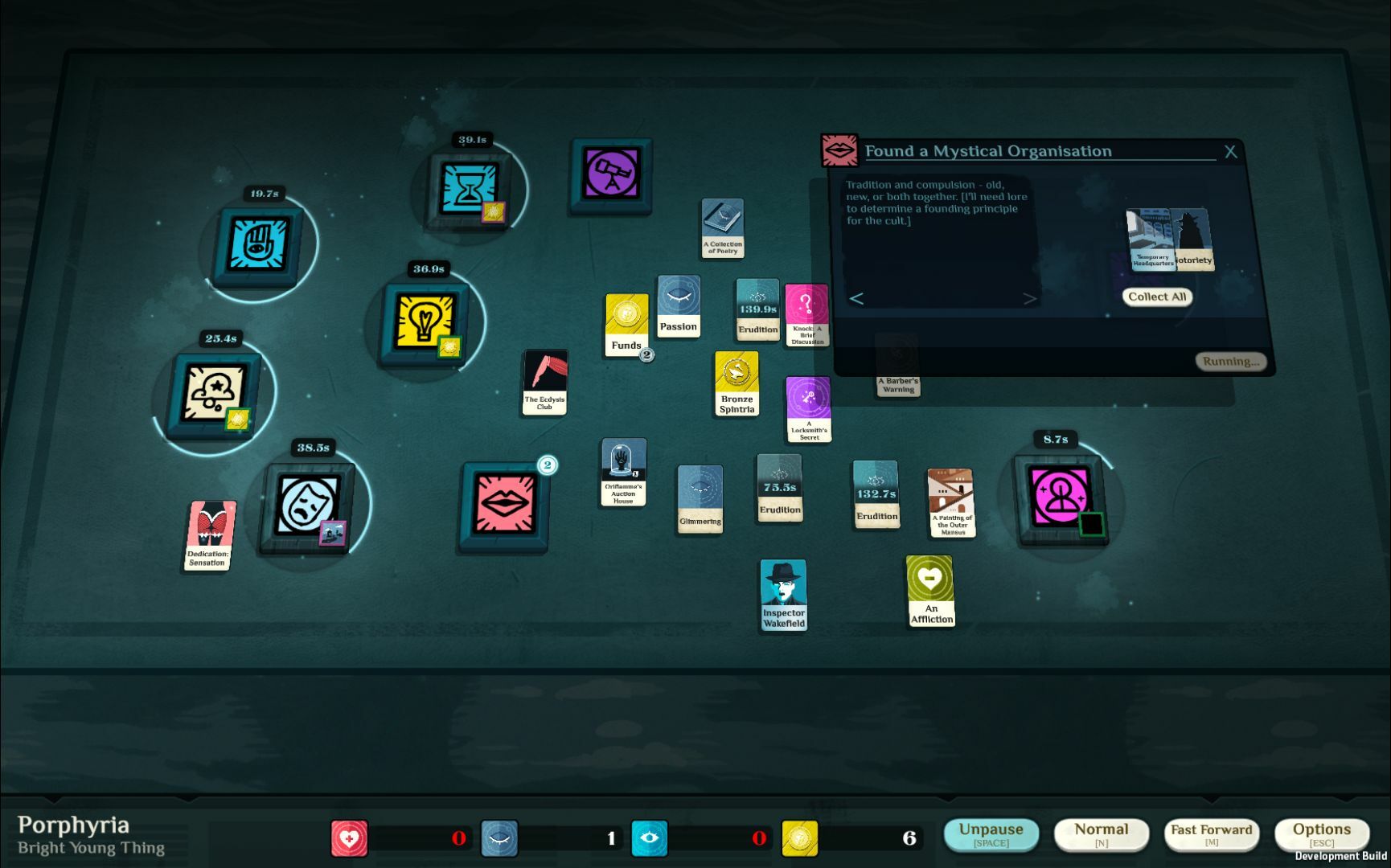 But here's the most important answer: words are like water, for story in a game. You need to make sure you'll have enough, or the story dies, but add too many, and the story drowns. When you're writing for a game, the player's attention is a gift from moment to moment. As soon as the player thinks the text is optional - or, worse, is homework - they'll stop paying attention and wait for the rest of the game to start up again. From that point on, the words are worse than useless.Cultist Simulator is a narrative game, and the writing is a big part of it. But I was determined not to waste the gift of the player's attention. I wanted to be pithy and concise; I wanted the words to do their job of making you have a feeling, and then I wanted them to get out of the way. So I set myself that 25% limit, which I nearly stuck to.Just the other day, someone asked me in an interview: "Do you consider video games as an art in itself, like literature, painting, music and cinema?" and my answer was "Well obviously." That argument's largely settled now. But ten years ago it wasn't settled at all, and there are still some bomb craters in the landscape where that particular war was fought.One of those bomb craters is this. A lot of us game writers kinda feel we would be taken more seriously if we were writing literature. The thing about literature is it tends to be longer than game text. So a lot of us, a lot of the time, are tempted to write long.Here's the thing. Stephen Donaldson is a fantasy writer who was notorious, back in the eighties, for his giant, successful, rambling, overwritten, comically verbose fantasy blockbusters. But Donaldson was also a writer responsible for elegant, disciplined short stories, with few words wasted. Honestly, it was hard to believe it was the same guy. 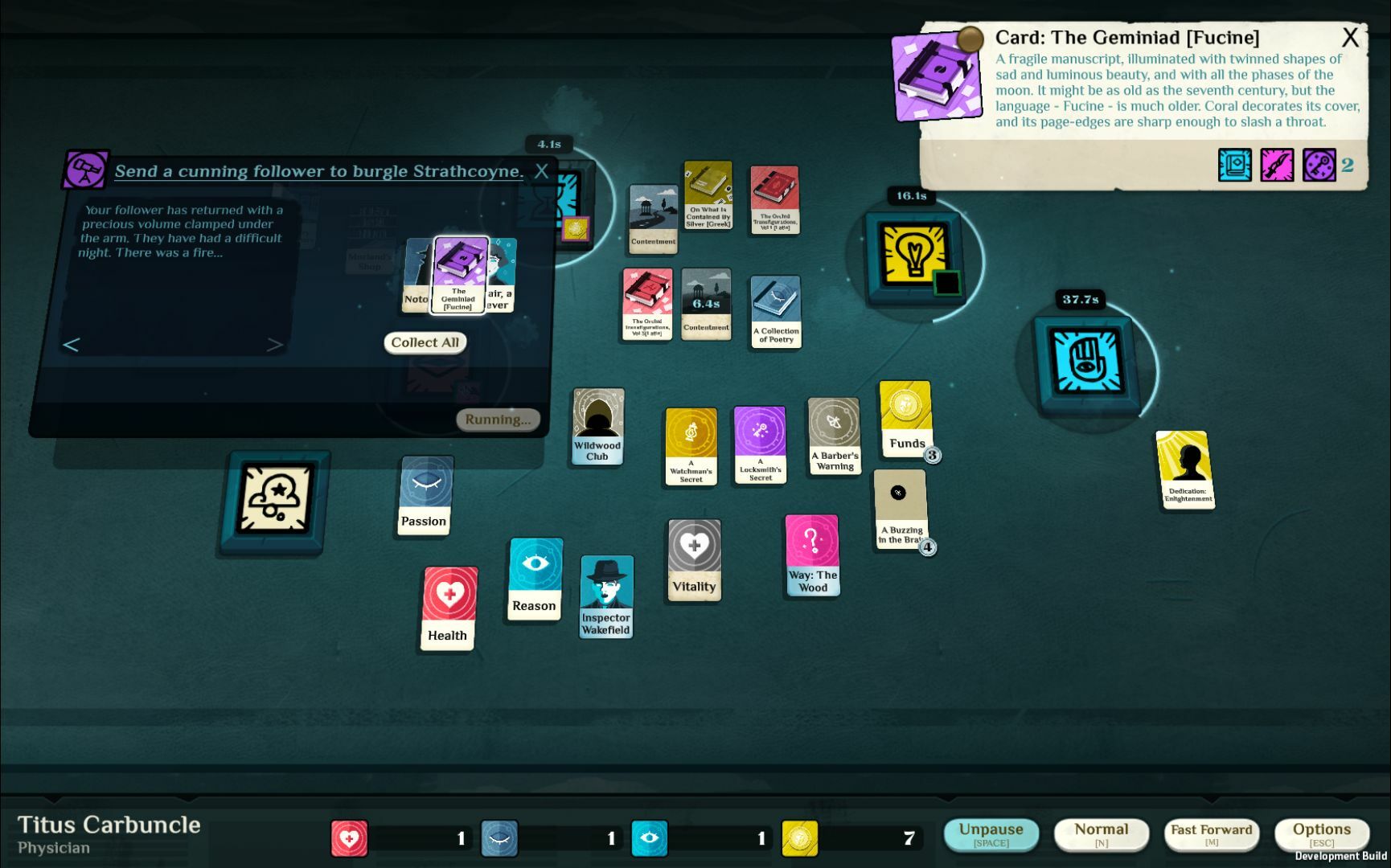 But it turns out that Donaldson wanted to be taken more seriously, too, as a short story writer, not just a novelist, because he felt short story writers were the real artists. And so it goes, of course: film-makers wished they were taken as seriously as theatre-goers, and I'm sure a bunch of playwrights wished they were poets, and I bet a lot of early poets wished they were taken as seriously as the folks who painted the antelopes on the walls of the caves.But the point is, this is what Donaldson said in the introduction to a collection of those short stories:"In a novel, the writer simply stands back and throw words at his subject until some of them stick... But in a short story the words, being so few, must be carefully placed on the subject (in the pockets, so to speak, or perhaps behind the ears) in order to have any impact at all."And that, I think, is what the most disciplined, most exciting games writing is: words placed carefully in your pockets. It was challenging and it was fun to write this way. Some people have loved my previous games and some have hated them, but but no one, ever, has complained they are too short. I hope Cultist Simulator will be just the right length. And if it ain't, please tell me.
See comments (21)