Couch co-op, one of our most time-honored traditions. There are few ways to game that are equally social, few battlefields as intense as our couches, and few gaming memories as vivid and nostalgic as those side-by-side with our friends.The robust co-op campaign in Nex Machina got us in that couch co-op mood again, so we got together with our favorite authority on the subject – the team at Co-Optimus.com – to bring you their take on the best that GOG.com has to offer.Read on!

by Tally CallahanWhile there’s certainly advantages to living in a gaming era that emphasizes online co-op, couch co-op games will always hold a special place in many of our hearts. Therefore, we (the folks at Co-Optimus) were extremely pleased when the recently released Nex Machina brought back this nostalgic experience in fine form. As a game developed with local co-op as a core focus, Nex Machina absolutely thrives. That got us thinking about how PC games with strong couch co-op experiences can sometimes be difficult to find, so we compiled a list of our absolute top picks of couch co-op games on GOG, presented in no particular order. 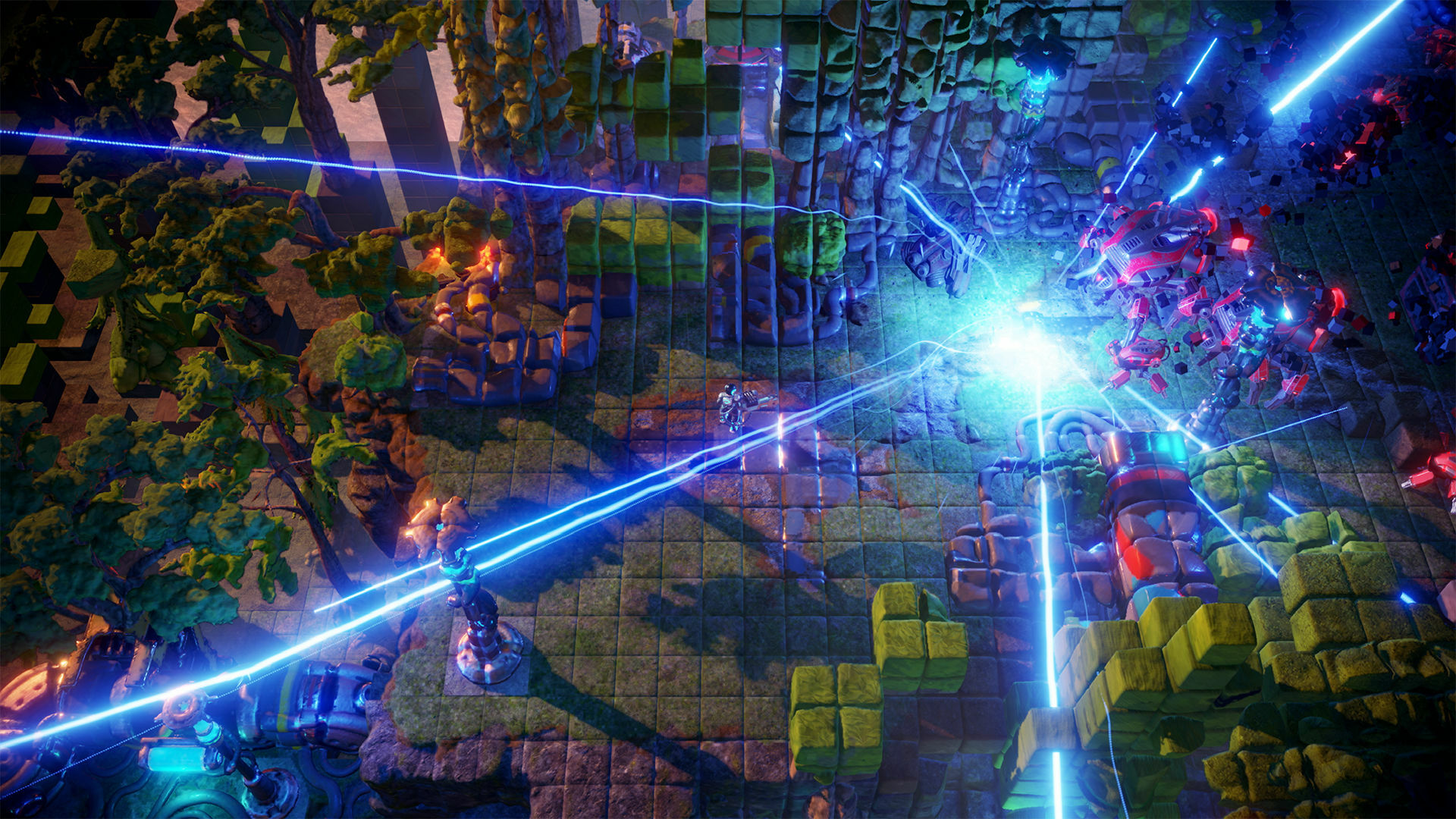 Nex Machina is a twin-stick shooter with simple goals, but tough-to-master levels. The story basically boils down to “kill enemies, rescue humans,” but the layers of strategy more than make up for the lack of narrative depth as they make the game highly addictive and replayable. While the game is satisfying in solo play, Nex Machina truly shines in its two-player local co-op mode. Players can take full advantage of tactics that need two characters (e.g. using one player to bait enemies while the other focuses on saving humans), not to mention the quick and rapid gameplay lends itself perfectly for couch co-op as players chase the leaderboards together. 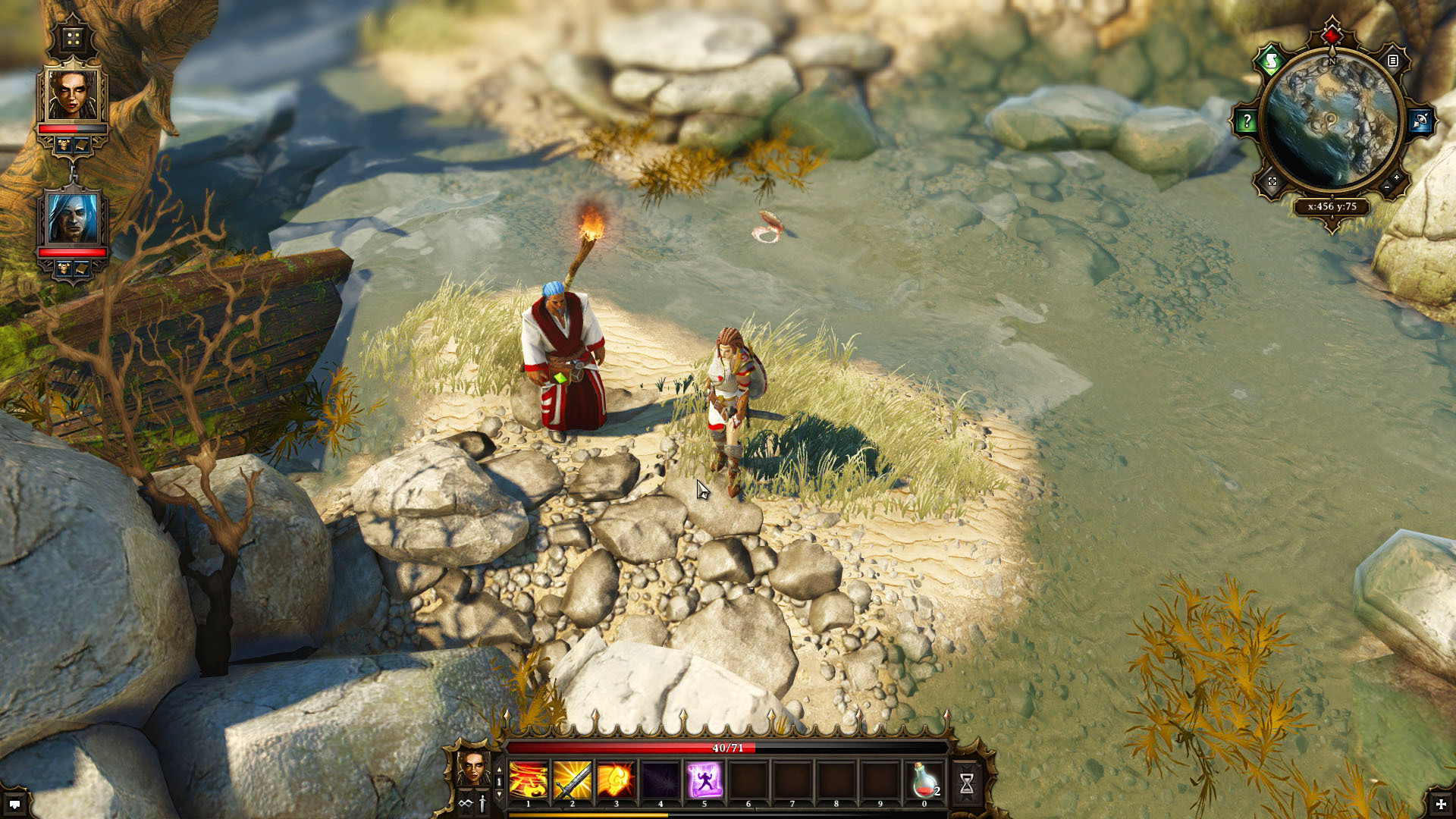 Divinity: Original Sin (D:OS) is a modern take on the isometric, turn-based tactical RPGs of old that are fondly remembered by many PC gamers. It successfully captures the essence of what made these games so memorable (e.g. extensive stories, impactful choices, unforgiving combat), but at the same time it isn’t afraid to incorporate some modern conveniences to make the experience that much better. One such addition was introduced with the release of the Enhanced Edition: couch co-op. While the vast majority of the old PC tactical RPGs were either single-player, LAN, or TCP/IP, the Enhanced Edition of D:OS gives players the opportunity to play this classic style of game in two-player couch co-op. The ability to sit side-by-side with your gaming partner, discussing the important decisions the rich story has the offer while looking at the same screen (rather than hollering across the room) is a beautiful thing. This lovingly crafted, modern take on a classic genre also supports online co-op. 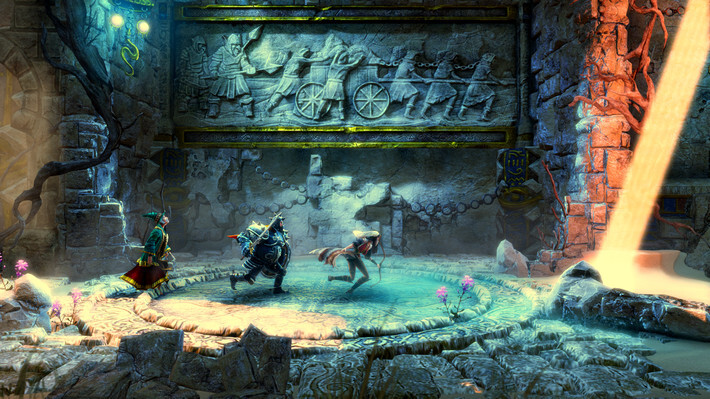 Never in want of flattering adjectives to describe it, Trine 2 is challenging, cerebral, gorgeous, innovative, and (most importantly) collaborative. Up to three players take on the roles of the game’s three characters: a thief, a wizard, and a knight. Each character has their own special abilities, which can be upgraded over time, and all of them are required in order to traverse the game’s levels that are fraught with enemies, challenges, and traps. Trine 2 is at its absolute best when players are working together to puzzle their way through a level by coordinating these special abilities, and we’ve found that it’s particularly convenient to share the same screen during this process. You can easily get up off the couch to point to a particular spot on the screen or smack your partner on the shoulder when he accidentally drops you to your death. If your gaming buddy is too much of a coward to face your justified wrath, online co-op is also supported.

Broforce is a side-scrolling platform shooter that seizes the shark, jumps it, then punches it in the face. Up to four players can participate in Bro-Op as they take on the roles of iconic action hero characters with over-the-top abilities and spectacular weapons as they combat terrorism and aliens. Together, they will shoot, jump, shoot, die, shoot, and high five their way through intense and challenging levels, then once again high five their pals when they get to the chopper. Did we mention that this game was MADE for high fives? Without local co-op, you couldn't high five your buddy, which would simply be criminal; however, if you want to be a rebel, Broforce offers online co-op as well.

Lovers in a Dangerous Spacetime 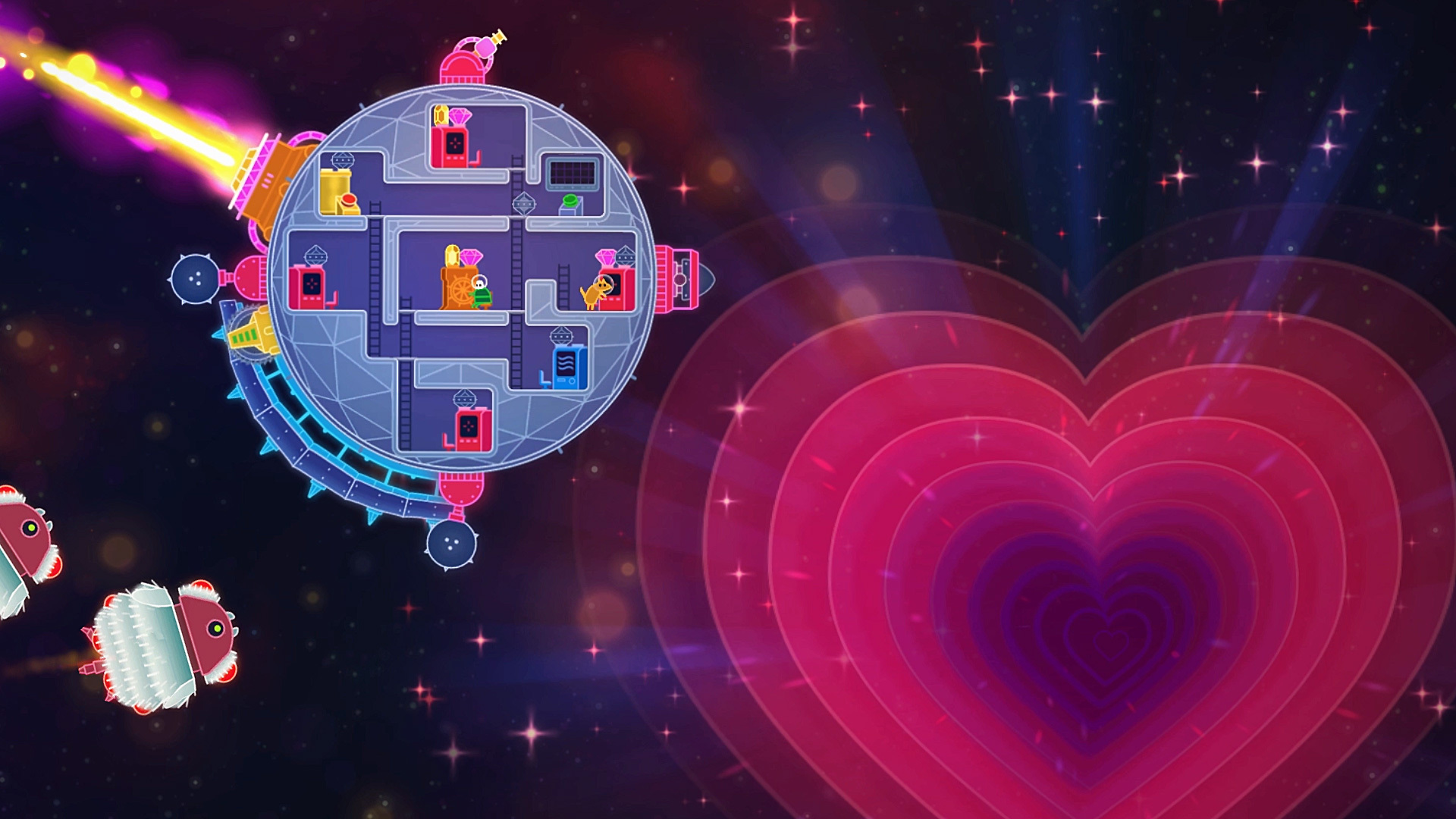 Lovers in a Dangerous Spacetime is one of the few couch co-op games we can think of that understands a great co-op experience is as much about communicating and working together as it is about having fun when you fail. In this game, up for four players team up locally to pilot a circular spaceship with eight different stations. Coordinating the movement of a big floating orb while also figuring out where to position your shields and which enemies to shoot is not as easy as it first looks, and you're definitely going to have moments where you don't beat a level. That's okay, though, because you'll come close, all groan in mutual disappointment, rally together, come up with a new strategy, and then cheer as you win the day. It's a game for friends (and lovers) to enjoy together. 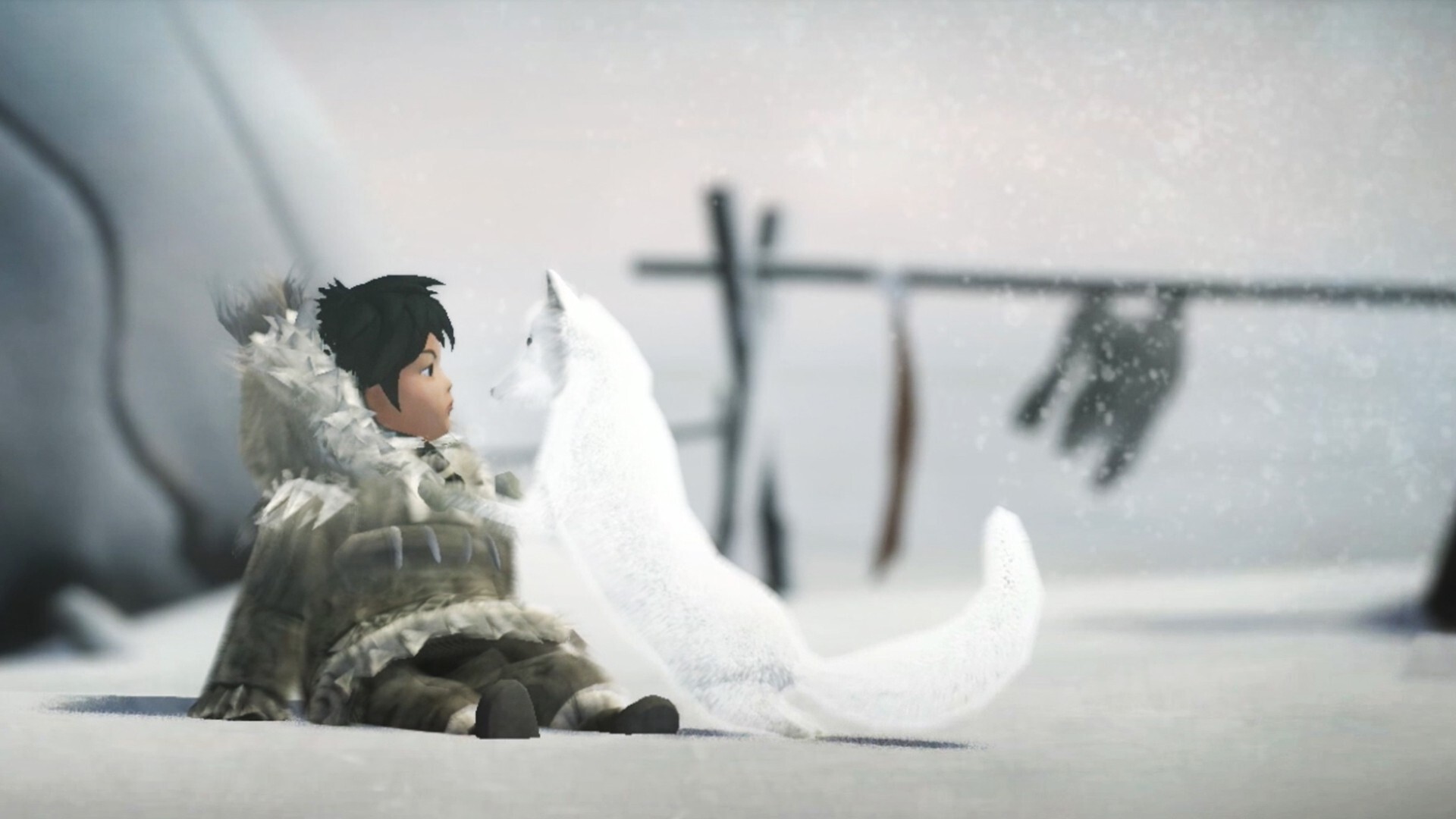 Never Alone is a unique and touching puzzle platformer game where two players take on the roles of a young Iñupiaq girl named Nuna and her arctic fox companion. While the game does have some traditional elements of puzzle platformers (e.g. ranged combat, manipulating the environment to progress through the levels), the real strength of Never Alone is how the narrative is told and the game is structured. Presented as an oral tale based on a traditional Iñupiaq story, the game places videos between gameplay levels that contain information about the Iñupiaq people, culture, and storytelling traditions. While there are some rough edges at times regarding the gameplay mechanics, playing Never Alone is an experience well worth having. Traversing the snow-covered land as two small characters who are fighting against something that seems insurmountably large is an inspirational journey, especially with all the insight into the cultural background. Having a friend or a loved one by your side for this short, but supremely sweet, tale is something truly special. 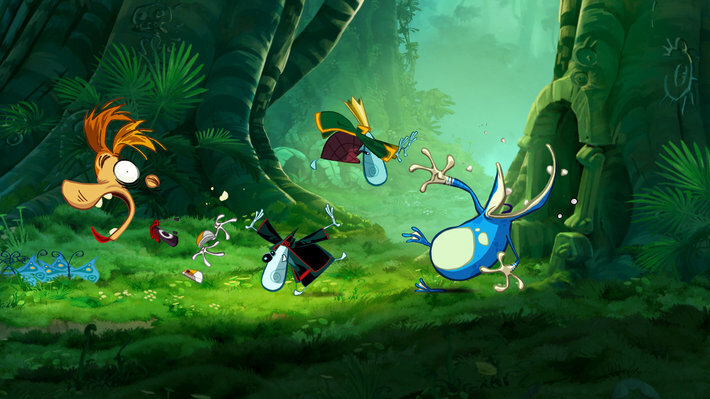 There are few modern platformers that we think can top Rayman Origins in terms of charm, well-designed challenge, aesthetics, and pure fun.This entry in the long-running Rayman series stands out as one of the best examples of the platforming genre, boasting stellar pacing, tight controls, and varied level design. Up to four players can take control of Rayman and friends in couch co-op as they jump, dash, and slide their way through 60+ jaw-droppingly beautiful levels. Playing with friends genuinely enhances this gaming experience, since it makes for some really memorable gaming moments. 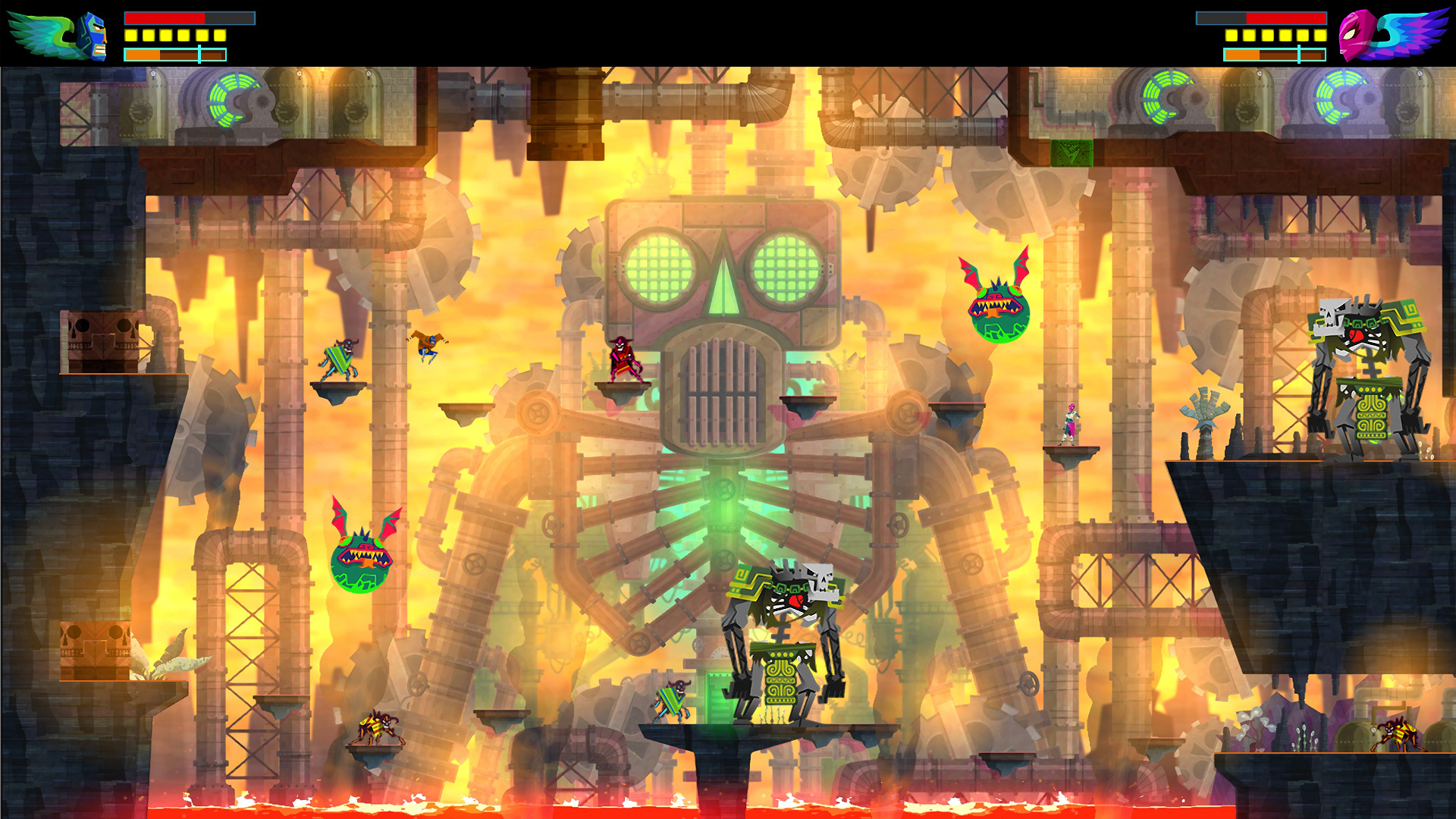 Guacamelee is a 2D Metroid-vania style game where two players can team up locally to don the masks of justice-fighting luchadors. As is the case with these types of games, it all comes down to the trifecta of platforming, fighting, and exploring, all of which Guacamelee pulls off very well. The game’s platforming and fighting are ingeniously integrated since different moves can often be used for both purposes, encouraging players to think outside the box. For this kind of thing, two heads are almost always better than one, so having a couch co-op buddy along for the ride is extremely welcome. That’s to say nothing of the handiness of having another set of fists and feet for combat. Exploring the beautiful landscapes is both enjoyable and practical, since defeating enemies grants players coins which can be used to purchase new skills, while scrounging levels for hearts and gold will give players more health and stamina. Guacamelee’s unique aesthetic and rock solid mechanics makes it an easy couch co-op pick.
See comments (43)