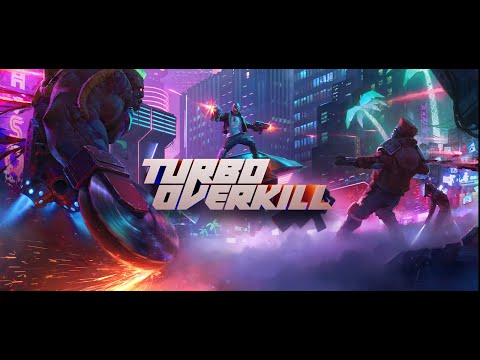 Heavily inspired by some of the all-time greats like Doom, Duke Nukem and Quake, with stunning cyberpunk visuals, Turbo Overkill is the most savage FPS ever released by Apogee. You play as half-metal, half-human, half-crazy Johnny Turbo, augmented with hidden arm rockets and a chainsaw that extends from your lower leg allowing you to kick-slice enemies wide open.

In this Blade Runner-meets-DOOM hellscape, Johnny returns to his hometown of Paradise and finds its entire population possessed by Syn, a rogue AI, and its army of augmented minions. Desperate for enough money to outrun his past mistakes, Johnny takes on the impossible job of destroying the greatest AI ever created. Rival bounty hunters want to claim the prize first. Nothing is easy in paradise.

Turbo Overkill takes over-the-top to never-before-reached heights. Activate Hero Time(™), a new form of slow motion with a twist. Build incredible speed by wall-running and dashing. Slide on your chainsaw leg, eviscerating foes and opening up bosses for critical damage, and go car-surfing on the hoods of flying cars. Blast away with the Twin Magnums, which lock-on and instagib several foes, the Boomer Shotgun and its attached grenade launcher, or the Telefragger sniper rifle, which teleports Johnny inside an enemy before they explode from within. The FPS genre is about to get wild and fun again.

o Kill a boss, get its augment (special power)
o Play Spider-Man with your grappling hook
o One-up Duke Nukem with your chainsaw kick
o Kills = cash. Use cash to install augments, upgrade your weapons, and add new abilities in your talent tree
o Be a ghost runner while wall running
o Attack from above riding the hood of your flying car like a kung-furious badass
o Mini-rockets built into your robotic arm? ✔
o This. List. Will. Grow. Wishlist the game to see it happen

Don't quote us on nuthin'

“Turbo Overkill is fast, frenetic and ferocious—excess personified,” said Sam Prebble, one half of Trigger Happy Interactive. “This is the game we’ve always wanted to play; making it is a dream project. Relentless enemies, extremely deadly and fun weapons, speed and precision above all else—if you love Quake III Arena, modern and classic DOOM, or Apogee’s legendary first-person shooters, you’ll feel right at home in Paradise.”

“As the guy who helped launch the shooter genre with Wolfenstein 3D, Rise of the Triad, Duke Nukem 3D, Max Payne, and Prey, I haven’t been this excited about an FPS since the golden era of Apogee/3D Realms,” wrote Scott Miller, founder. “Turbo Overkill is a sandbox of fun and original gameplay ideas that come together like a night of melty hot pizza and your favorite cold, frothy brew. Playing this game made me a Turbo Lover all over again.”

Copyright (c) 2020 Trigger Happy Interactive. The Apogee Logo and Theme song are trademarks of Apogee Entertainment, Inc. All other trademarks are the property of their respective owners.