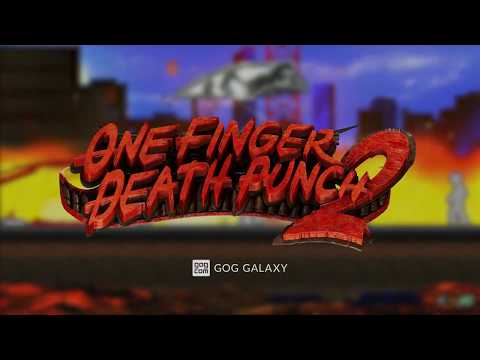 Why buy on GOG.COM?
DRM FREE. No activation or online connection required to play.
Safety and satisfaction. Stellar support 24/7 and full refunds up to 30 days.
One Finger Death Punch 2
Description
Simplicity to perfection.To be played in bursts.By design, there is no story.Only crazy kung-fu. You're surrounded, outnumbered and have to use any weapon you can get your hands on to dismantle your opponents in a flurry of kung fu. That's the essence of OFDP2, the world's fastest braw...
Critics reviews
88 %
Recommend
PC Invasion
4.5/5 stars
TheSixthAxis
9/10
TechRaptor
9.5/10
User reviews
4.8/5
{{ review.content.title }}
Product details
2019, Silver Dollar Games, ...
System requirements
Windows 7 / 8 / 10 (64 bit), Intel Dual-Core 2 GHz or equivalent, 4 GB RAM, Nvidia GeForce GTX 660 o...
Description

OpenCritic Rating
PC Invasionby Steven Wong
4.5/5 stars
With hyper-fast action and super addictive gameplay, One Finger Death Punch 2 is a near perfect kung fu fighting game featuring stick figures.
Read full review »
TheSixthAxisby Gareth Chadwick
9/10
One Finger Death Punch 2 is as fully realised as it can be. It's taken the concept of a two button action game and wrung every last drop out of the concept. What results is a game that is hilariously fun, yet heart pounding at its most intense. It's repetitive, sure, but incredibly playable and varied enough that things are just fresh enough to keep you thinking "just one more go."
Read full review »
TechRaptorby Samuel Guglielmo
9.5/10
One Finger Death Punch 2 manages to take a simplistic gameplay system and turn it into one of the most bizarrely addictive score chasers I've ever played.
Read full review »
Reviews powered by OpenCritic
You may like these products
In library In cart Soon Wishlisted
In library In cart Soon Wishlisted
Movie
Free
Play for free Coming soon
User reviews