Read how Werewolf: The Apocalypse - Heart of the Forest is shapeshifting gaming according to its creators

Greetings, gamers! I’m Piotr, the marketing guy for Werewolf: The Apocalypse - Heart of the Forest. I want to tell you how our game happens to be “the first-ever” in more than one respect.What’s Heart of the Forest, you ask? It’s a narrative adventure game based on the tabletop role-playing game Werewolf: The Apocalypse. This legendary title is set in a mystical version of our world, where werewolves are our Mother Nature, our Gaia, our protectors.In our game, you play as Maia, a young American woman searching for clues about her family in the last primeval forest of Central Europe. What she doesn’t know is that she’s walking right into the middle of a conflict between forces beyond her understanding.This is not only a cool story, inspired by real events, that we had a chance to tell, but also... 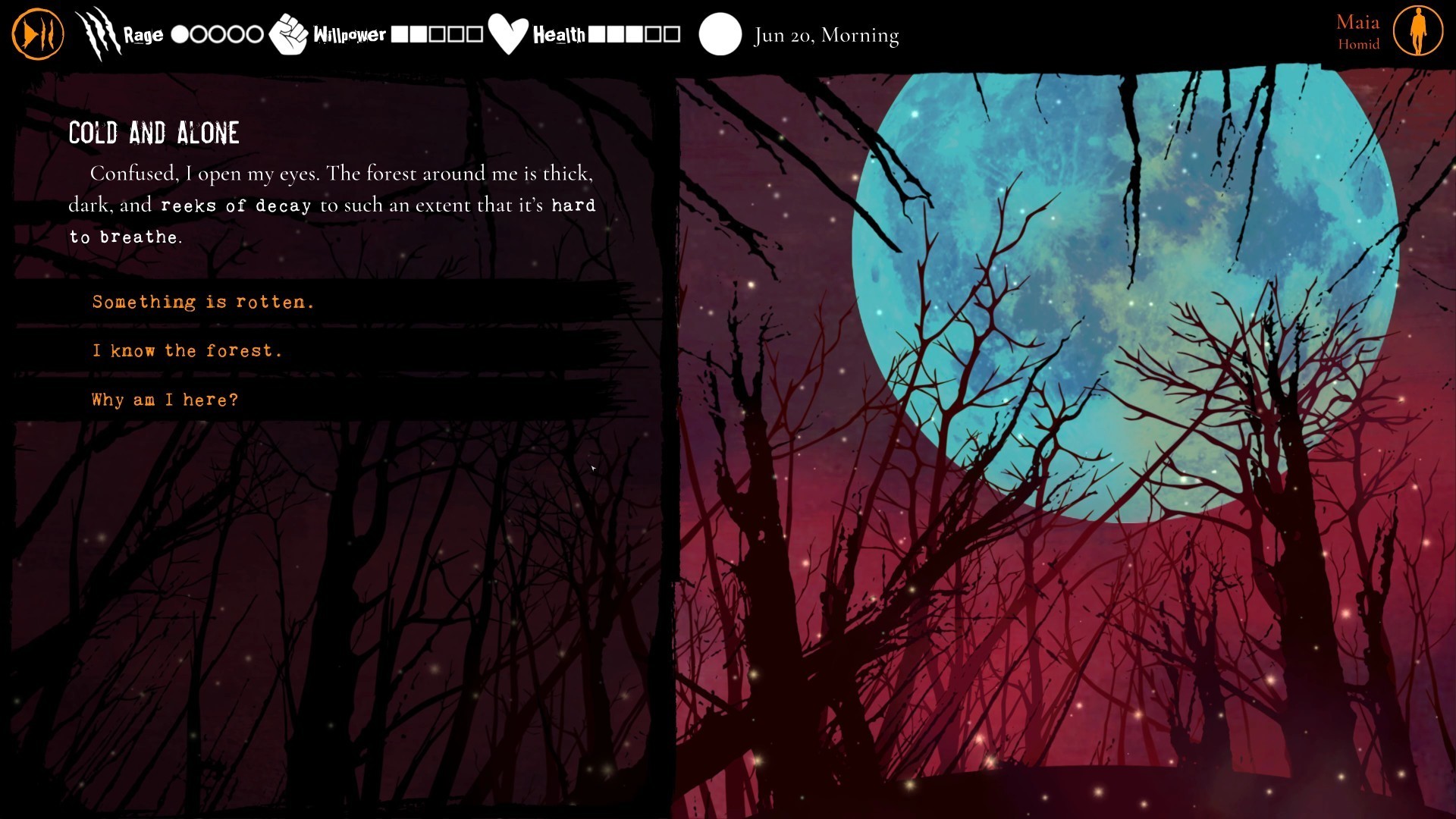 It’s quite amazing that Werewolf: The Apocalypse, a cult tabletop RPG system, has never had any video game adaptation. There are Vampire: The Masquerade games, which share the same World of Darkness universe, but no Werewolf titles (apart from one canceled attempt that you can still Google called Heart of Gaia). To be honest, we can hardly remember any game where you are the classic wolfman. The ancient Gabriel Knight or Altered Beast, maybe?At the moment, there are TWO Werewolf: The Apocalypse titles in production (the other one being Cyanide Interactive’s Earthblood). Still, our game will have the privilege of being the first official World of Darkness Werewolf game ever. We realize how important this title is, so we made sure to include everything that made the system special in the first place. 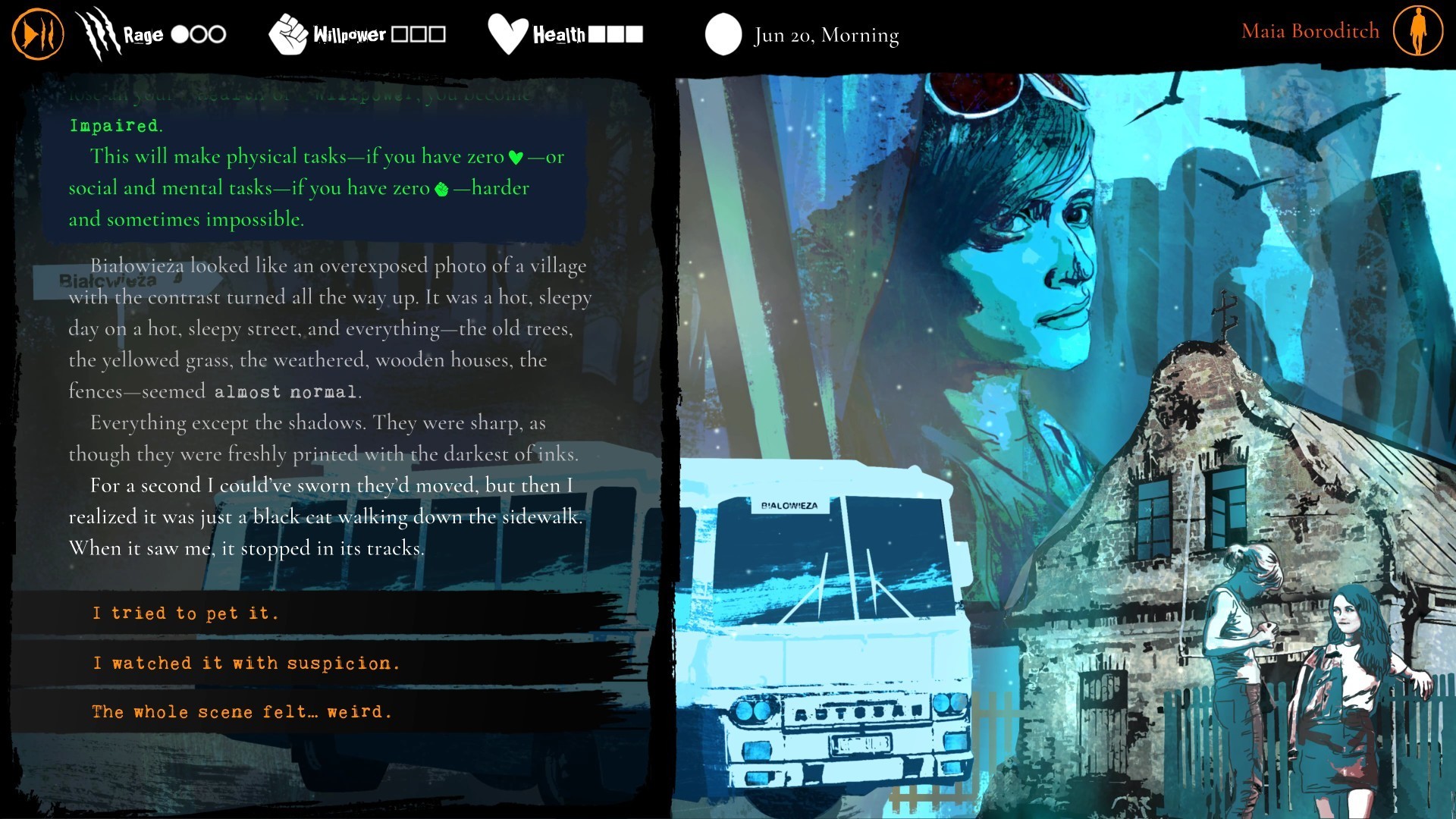 2. The first official Werewolf: The Apocalypse story set outside the United States

We really want to emphasize the “World” in World of Darkness. You see, this role-playing brand revolutionized the genre in the 1990s. It was the first to shift the focus from mechanics to narrative and storytelling and present the world from the monsters’ perspective, portrayed as tragic figures. The WoD games take place in our world, or in a version where vampires, wraiths, werewolves, and other mythical beings live among us. But most of their stories are set in the United States.We enjoy the idea that the World of Darkness is everywhere, even in your neighborhood. Who knows what interesting local legends are alive in the woods near your house? We wanted to explore this angle and expand the universe with places, facts, and myths from our own Polish culture. 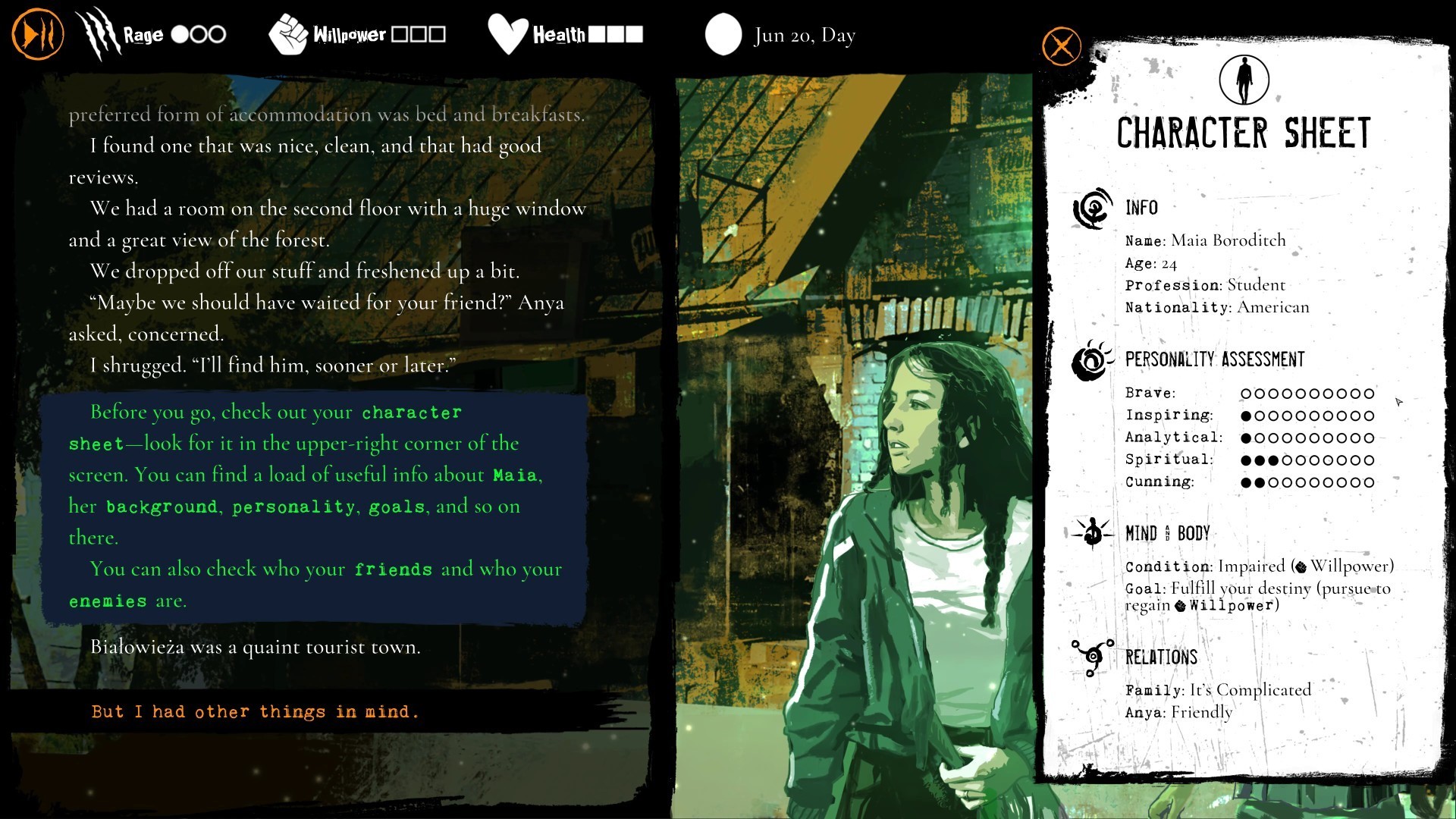 3. The first video game set in the Bialowieza Forest

There aren’t many games set in Poland, and we can’t recall a single one that portrays the Bialowieza Forest, a.k.a. The Puszcza - the last primeval wilderness in Europe. It's a special place where nature exists in its most primal form, right next to big industrial complexes. There’s a mention of it in one of the add-ons for Vampire: The Apocalypse, by the way.It’s a vast area full of myths and legends, which you will also find in our game. It existed over 11,000 years ago, and the first people settled in this forest almost 2,000 years ago, but their presence remained relatively limited. It was named after Biala Wieza (White Tower), a lone tower built in the wilderness in the 13th Century. This makes it a perfect setting for a World of Darkness story. The forest is where the wild creatures survive in large part because of human influences. In light of the changing climate, care and protection are absolutely crucial for the ecosystem. In recent years, massive protests have been held in the Puszcza to take a stand against commercial logging. This lets us ask questions that have always been relevant to Werewolf: The Apocalypse. Where should our interference with nature end? Aren’t we morally bound to interfere? How far would you go for a good cause? 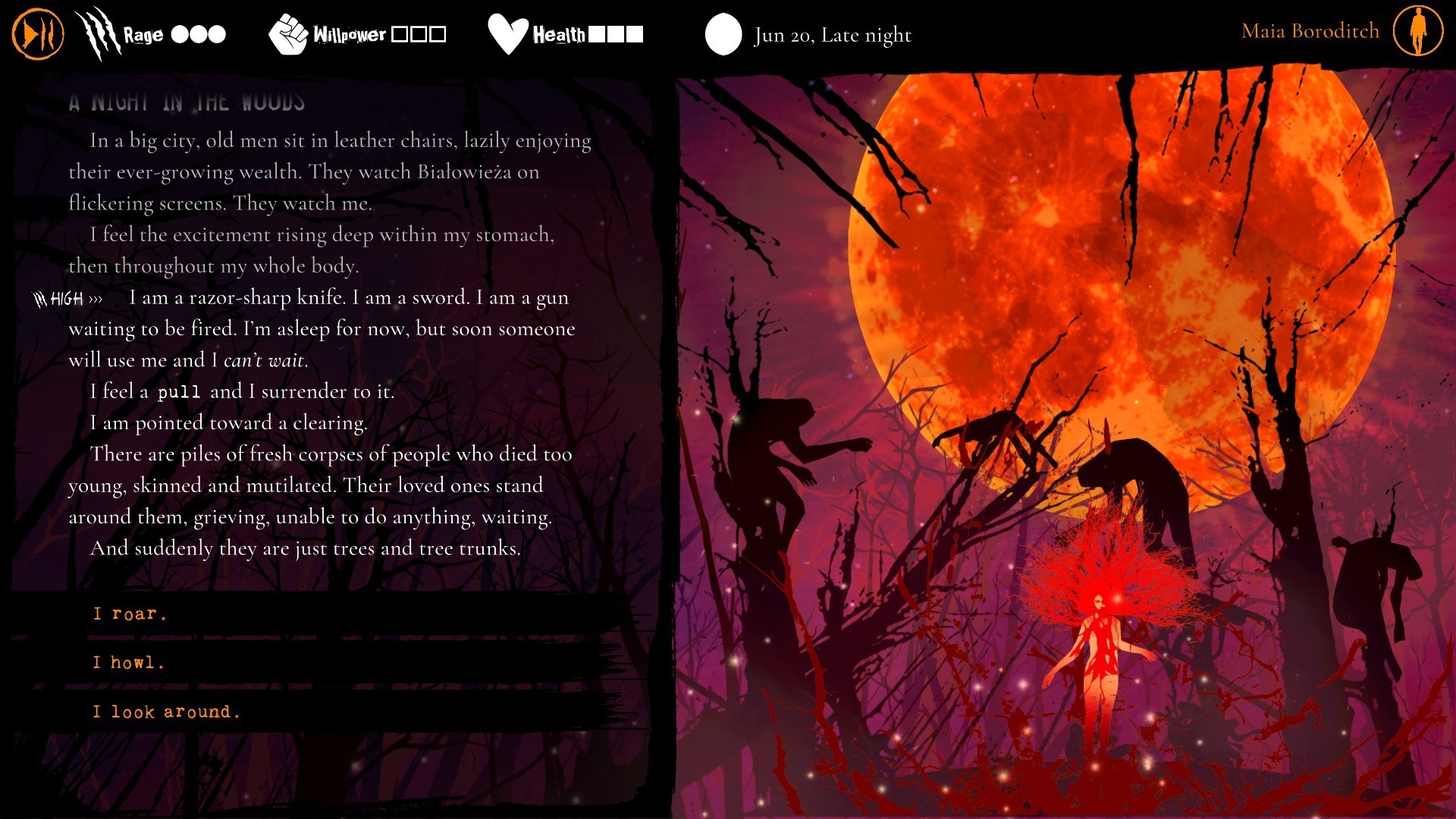 4. The first mix of visual novel and pen-and-paper RPG

Our game is rooted in the tradition of visual novels; however, we chose this as our starting point for expanding into a tabletop-like RPG. That’s because a visual novel is much easier to get into than a stat-based RPG. And besides, RPGs are our thing. We not only worked on The Witcher and Dead Island but also wrote countless World of Darkness scenarios and have been invested in this world since our teenage years.There are numerous choices to make and fights to have, where the result depends on your current resources and past decisions. You will choose when and if you should transform into a werewolf, and you will choose one of your five forms. (By the way, spoiler alert: you turn out to be a werewolf! Who would’ve guessed?)We designed Heart of the Forest after the pen-and-paper RPG experience. The game is your Game Master, but more importantly, you are the player whose choices shape the story. What kind of werewolf will you be? Who will you ally with? What tribe will you join, and how will you choose to act to save the Puszcza? 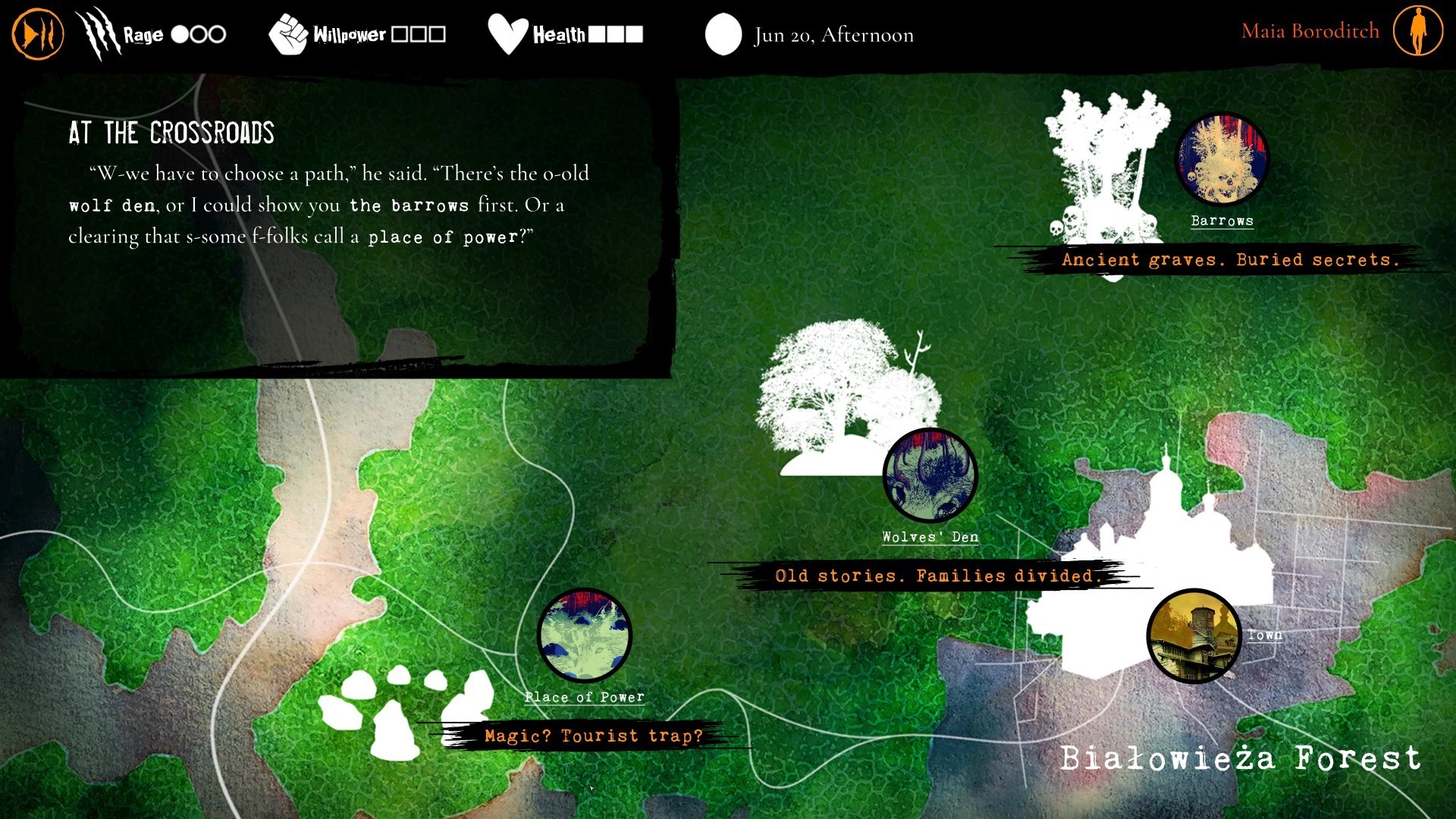 The gameplay simulates a pen-and-paper session, with the game asking what you want to do next. We also adapted the use of three main resources: Rage, Willpower, and Health. Rage is what makes the game different. The higher your Rage, the more ambitious and aggressive you become. However, this makes your perception quite binary, and you become unable to see all the shades of grey. Low Rage brings empathy and openness but also makes you fearful and less willing to act. We hope to reflect classic tabletop sessions using these unique mechanics. There’s also one thing that distinguishes Heart of the Forest from most RPGs. Traditionally, you define your character at the beginning, and then you’re stuck with it. Here, your Maia (the main heroine of the story) is defined through your actions over the course of the game. We find this a more realistic and true-to-life approach, resulting in wholly different and non-restrictive playthroughs, with similar scenes portrayed differently due to your character’s unique views.Everything is illustrated with unique collage art inspired by Dave McKean. Our visual style is far from literal. It doesn’t portray--instead, it suggests. We chose this approach to better reflect the savage, somewhat horrific nature of the story and the world you’re in. 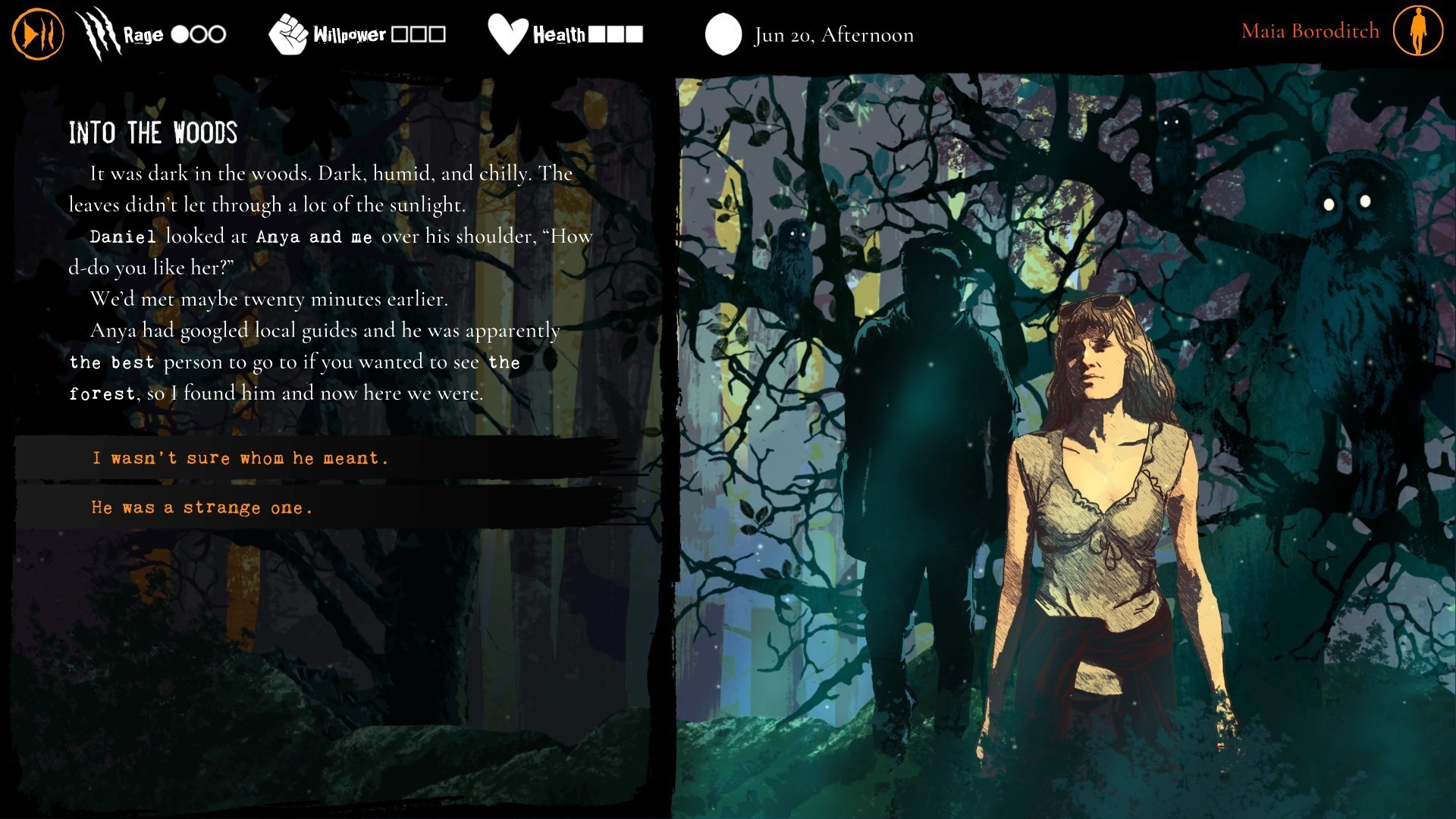 5. The first game to bring to life actual Polish stories and legends

We have a thing for Polish legends. Artur and Jacek, our lead designers, worked on the first Witcher game, where our local myths inspired numerous quests and characters. But in The Witcher, these were inspirations. In Heart of the Forest, we bring actual legends to life.You can see at least three of those in the free demo you can now download on GOG.com. First of all, you will visit The Barrows, a real resting place of a tribe that lived in the Puszcza 1,500 years ago and mysteriously vanished. You will learn about Kazan, the most famous Polish wolf, and the symbol of protection over his endangered species. In 2001, he died after his caretakers failed to notice his battle wounds. Finally, there are Places of Power - real, mysterious sites located across the Puszcza. In the 1990s, diviners and clairvoyants from around the world gathered in the forest to search for these places of magic.And that’s just the demo. There’s more mystical goodness to experience in the full game!Give it a try.

When you finish the game, let us know what you think, and what kind of Maia you ended up with, in the comments below!
See comments (13)