Discussing the Myst legacy and going into a new Age.One of the most iconic franchises in videogame history and the series that pretty much legitimized the first-person puzzle/adventure sub-genre, is turning 25 this year.To celebrate this momentous occasion, we've brought Myst III: Exile and Myst IV: Revelation to GOG - the two lost chapters of the saga that have been unavailable for purchase since forever.Now we're putting the cherry on top of this anniversary cake with a brief interview with Rand Miller, CEO of Cyan Worlds. Enjoy!

The Myst games have been widely praised for their intricate backstory and deliberate design, always consistent with their world's internal logic. Did you have all that mapped out when you started developing the series, or was it an emergent process?

Rand: Myst was mapped out and deliberate. Every location, each age, the buildings and puzzles were all documented by my brother Robyn and me. Toward the middle of that process we started thinking about more details that would fill out the larger story that surrounded the events of Myst - and that’s where the D’ni story came from. We weren’t sure if the larger story would ever see the light of day, but as it began to take shape, it actually began to turn back and affect elements of the game. It was a very interesting recursive process that we still use to design games here at Cyan. We hope that it’s that internal logic that makes our stories seem more authentic and less like just a game.

Building quality is one thing but gaining this level of loyalty is quite another. What do you think is the element(s) that keeps the Myst brand so strong over the years, with fans showing their support consistently on your Kickstarter projects and beyond? What makes them so timeless?

Rand: Honestly I think it’s what has driven good storytelling for many years - internal consistency, attention to detail, and hints of something much bigger that makes players feel like they’re experiencing a small window into a much larger world. That’s what makes people wonder what is around the next corner. It doesn’t matter what the medium is - those are the kind of stories I’m driven to return to. 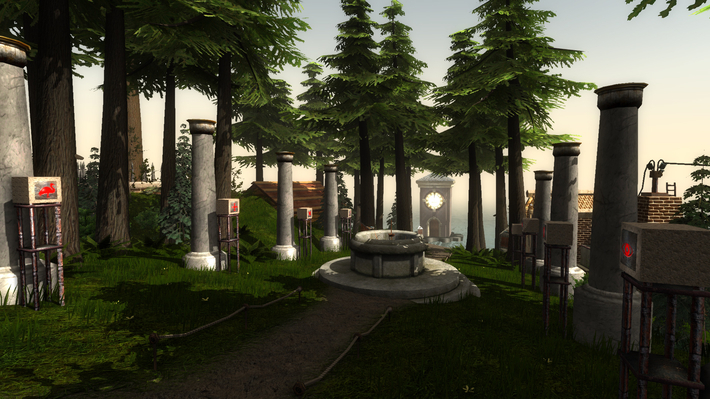 Speaking of Kickstarter, your recent campaign for the 25hth Anniversary edition was a resounding success. This physical edition was something your fans were asking for or something you wanted to do as a "last hurrah" for the series?

Rand: Twenty five is kind of magic number in the Myst universe, so it only seemed fitting to do something extra to celebrate the 25th anniversary. One of the difficult parts of the Obduction Kickstarter was providing all the physical rewards — we said we’d never do that again. So… well… we have very short memories. And besides, we really wanted the cool physical artifacts, too!

What's you proudest or most peculiar memory from working on the series? What about your favorite in-game moment?

Rand: My most peculiar moments are being recognized in public. I live a reasonably normal life in Spokane, Washington, and in spite of the fact that the Myst series has sold tens of millions of units, it still surprises me when people know about the game, and especially when they recognize me.And in spite of the fact that it wasn’t a commercial success, I’m still really proud of Myst Online/Uru. We developed an experience that was cutting edge and very unique, and I still remember some of the events that occurred in the cavern that affected people deeply.

Alright, let's get real: any plans for the future? Are you thinking of returning to the Myst series or perhaps make a sequel to Obduction? How about an entirely new project? Spill the beans, guys!

Rand: Ha, okay, yeah! Working on Obduction was like leaving your house for a vacation — a change of scenery. It was nice working with a blank slate and making something completely new. But after our vacation we came back home and realized that we are really enamored with the potential for VR/AR. Almost everyone who has played a Myst game knows that it would be amazing to experience our immersive worlds in VR - we hear it all the time. So we’re planning for that — a new experience, new story, in some familiar Ages, and some new Ages... but not until the time is right. It’ll be something amazing.
See comments (45)