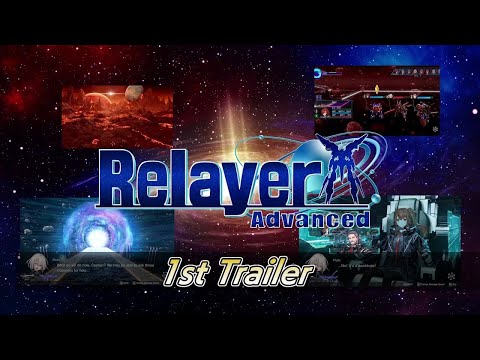 "Relayer Advanced" is our new SRPG with the theme based on the "Stars x Mechas x Greek mythology" created by the "GODWARS TEAM".
The game depicts a fierce battle between the "Starchild" with special abilities and awakened by the “Will of the Stars”, and the "Relayer", a mysterious intellectual life form planning to invade Earth.
Players will command their "Stellar Gear" forces maneuvered by the Star Child, and battle against the "Relayer" forces.
Players can fully utilize the game’s strategic system in the battle stages, such as quantified "Hate" figures that shows how easily it is to be targeted by enemies, job and character unique "Skills" "backstab" pincer attacks, and the special devastating move "Big Bang" to lead their forces to victory.
“Relayer Advanced” is a powered-up version of "Relayer" (released in March 2022), which includes a renewed UI, new functions and an enhanced end content. Players who have played "Relayer" and those who are new to the game can both enjoy it.


The UI on the battle map has been significantly renewed. In addition to downsizing the character icon, the overall visibility has been improved by changing the expression of movement and attack range from grids to the new “Luminous Lines”!
NOTE: Grids and Luminous lines can be switched as an option.


Implemented the ability to browse adventure part scenes played during the game. Players can now view the events when obtaining their NEXT-type mechas, It’s also a convenient function if the player accidentally skips an event; Players can always go back and watch that event.


A High-Level mission called "The Wormhole Mission" consisting of 5 stages has been newly recorded as the end content. These missions are unlocked after clearing the main game.
They are even more difficult than the end content in the main game, "The Asterism Voyage", but adjustments have been made so that players can easily clear those stages in the easy mode.
We humans were not alone …
Star Date Year 2049.
Mankind ultimately encounters the mysterious extraterrestrial life form, "Relayer".
At the same time, with the excavation of an ancient galactic civilization, the destiny for the "Star Child” , humans who are awakened to special abilities, gradually begins to move forward.

Star Date year 2051.
The fateful story of the Starchild and Relayer begins with the encounter of two women on "Artemis": Colony built on the Moon.
Welcome to the world of a spectacle space adventure by humans and ancient galaxy beings anthropomorphized from the Stars and Greek gods intertwine and collid!

NOTE: In addition to the standard edition, there is also the "Relayer Advanced EXTRA PACK", which is a set consisting the main game and the "NEXT-type Pack". Please be careful of duplicate purchases.