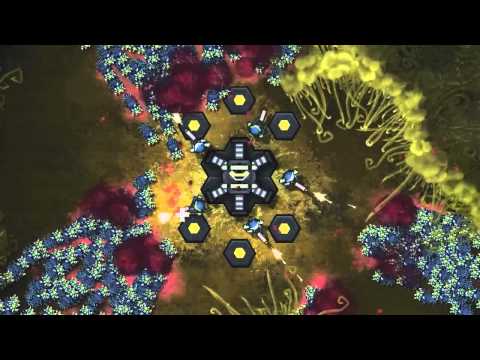 The enemy is closing in around you. Your soldiers are being flanked and the perimeter is slowly collapsing under a vicious alien assault. Robotic turrets will not last much longer. Just a little more and the bugs will swarm into your unprotected base. What are your orders?

You order your soldiers to fall back to a defensive chokepoint and rebuild your defenses. Sacrifice the forward squads to gain some extra time. Gather your team while equipping them with flamethrowers and laser guns. Start building a siege cannon for fire support. Then, while the aliens are busy, flank their main hives to destroy and capture them.

You have just pulled off a tactical victory - but there's no time to rest.

The aliens are constantly mutating. One moment your shotguns are ripping through the horde, the next the aliens grow hard, bullet-proof armour. You must adapt as well. Equip your team with stealth suits, miniguns, grenade launchers - your commands will decide the battle's outcome.
Goodies
avatars wallpapers
System requirements
Minimum system requirements:
Recommended system requirements:

OpenCritic Rating
We Got This Coveredby Michael Shelton
4/5 stars
Infested Planet is a solid addition to any real-time strategy fan's Steam collection. The constantly evolving gameplay offers a fresh variation to a familiar formula, and at $14.99 it's hard to argue against the game's value.
Read full review »
Softpediaby Andrei Dumitrescu
8.5/10
Infested Planet is a good title that can provide many hours of intense action and solid strategic thinking, and I loved the way it focuses on the simple act of battling an ever-moving stream of aliens to create tension and a sense that every battle has clear stakes.
Read full review »
Twinfiniteby Christopher Hadlock
4/5
Infested Planet does a lot of things well and should be on the radar of RTS players that enjoy playing with the strategy of the game more than duking it out against others.
Read full review »
Reviews powered by OpenCritic
You may like these products
In library In cart Soon Wishlisted
In library In cart Soon Wishlisted
Movie
Free
Play for free Coming soon
User reviews