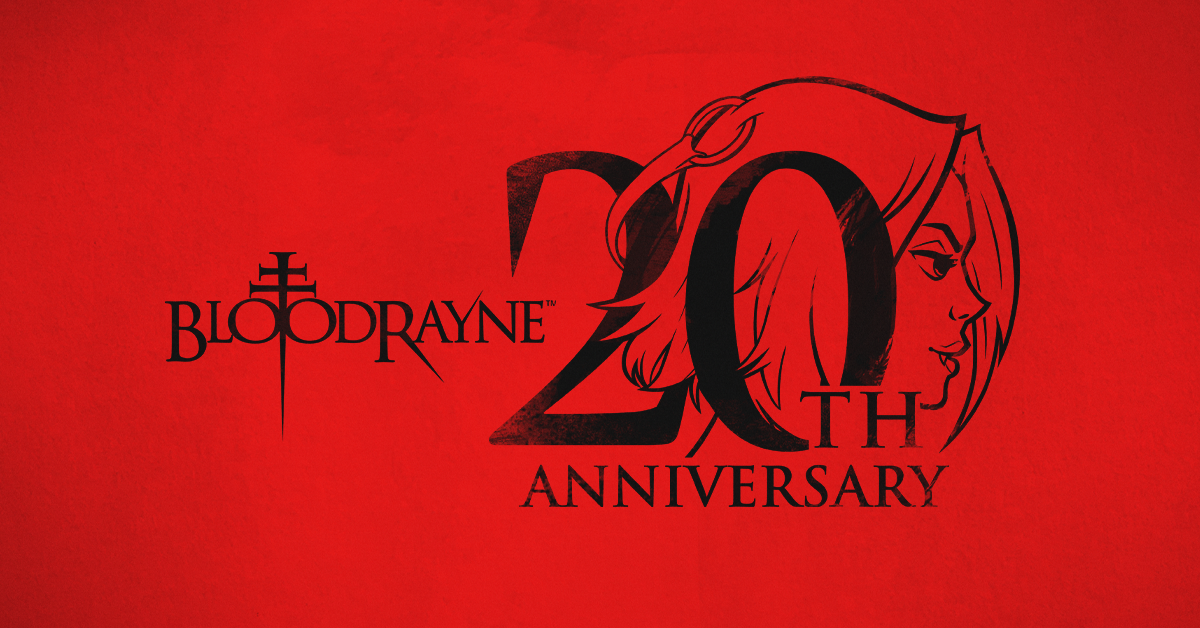 It’s been 20 years since we first met our favourite human-vampire hybrid – dhampir Rayne. This crimson-haired, pale-skinned and green-eyed woman became a fan favourite character in almost an instant and served as a main protagonist in a media franchise BloodRayne. To celebrate its anniversary, we’ve launched a Special Anniversary Sale on all BloodRayne titles and  want to take a closer look at the series’ history.

Over the course of 20 years, BloodRayne has offered us three video games, three motion pictures and a comic book series. And while we will mainly focus on our favourite medium and the one that started it all, we’ll also mention the other two. But let’s not get ahead of ourselves and start – as all great stories do – from the beginning.

Developed by Terminal Reality, the first entry in the series was a horror-themed third-person action adventure and hack & slash game. It introduces us to Rayne, who is a daughter of vampire Kagan and an unnamed human woman, which makes her aforementioned dhampir.

Dhampirs have the strengths of a vampire while only possessing some of their weaknesses but to a much lighter degree. They are born as living beings rather than undead, yet they still have the, so iconic for vampires, blood quenching tendencies. These characteristics make Rayne a perfect fit for the Brimstone Society – an underground group of elite special agents dedicated to protecting the world from supernatural threats. The game is set in a timeframe just before World War II and begins with our protagonist receiving the invitation from the Society, which she accepts.

The title is divided into three main chapters, all offering unique settings, enemies and lots of fun rampaging through them. The first one takes newly recruited Rayne along with her mentor Mynce into swamps of Louisiana and serves as an introductory part. The quest is to hunt down and eliminate a parasitic infestation, which turns the people who live their into mind-controlled slaves. The Louisiana chapter helps us understand the controls, basic mechanics of the game and BloodRayne‘s bread and butter – combat system.

Rayne’s signature weapons are her Twin Arms Blades that also serves as a default melee attack, which ultimately allow her to perform awesome combos decimating her foes. Throughout the game we can expect to gain new abilities of the blades after beating bosses or by fulfilling certain objectives within levels. But our charismatic dhampir’s skills don’t end at just slashing. In addition, Rayne gains access to a variety of guns: pistols, shotguns, rifles, rocket launcher, explosives – you name it! Moreover, she makes full use of her silver steel stiletto heels performing devastating kicks from different martial art styles.

And it goes without saying that she doesn’t shy from gaining advantage by using supernatural vampire powers and drinking the blood of enemies to accelerate her healing and restore her own health, draining her victim completely in only seconds. To be completely honest, to fully explore Rayne’s arsenal we would need to create a whole individual blog entry!

At the end of the first chapter we learn about the main antagonist of the game – Jürgen Wulf, who leads the Gegengeist Gruppe, a group aimed to search for occult artifacts, including obtaining and reassembling the remains of ancient demon Beliar. That brings us to BloodRayne second chapter set in Wulf’s secret naval base in Argentina. Here Rayne is no longer fighting mind-controlled mutants but rather Nazi soldiers. The general mission is to go around the compound and take out the high-ranking members of the Gegengeist Gruppe. Enemies are tougher and require to use Rayne’s arsenal according to their strengths and weaknesses.

Once we’ve taken out all the targets in the Argentina base, BloodRayne shifts to its third and final segment – an ancient castle in Germany where the remaining members have escaped. We are introduced to the new enemy type in the form of evolved vampires and bottomless pits which will keep us on our toes and make full use of Rayne’s agility.

Great voice acting cast, action-packed combat, unique and interesting story and an unforgettable main protagonist made this title a true sensation and it wasn’t long until we could enjoy another entry in BloodRayne world.

Two years later, Terminal Reality brought us BloodRayne 2 – sequel to the original game. While BloodRayne laid down an amazing foundation and concept, the second part sought to improve and expand on them even more. It does not however follow on directly from where BloodRayne finished; instead, it takes place 60 and 70 years later in a contemporary 2000s setting. But there was nothing to be worried about, because our dhampir protagonist hasn’t aged a day thanks to her supernatural powers and we still get to slash through enemies with Rayne and her twin blades.

In the time between games, Rayne has been hunting down and slaughtering the offspring of her vampire father Kagan. They have formed a Cult of Kagan and its remaining members constructed a doomsday weapon known as The Shroud – which when activated will darken the skies allowing vampires to run free any time of day. To stop that from happening and fulfill her personal vendetta Rayne sets off to take out Kagan and her half-siblings. She’s also joined by the series newcomer from the Brimstone Society.

Sequel has received a visual update making the mayhem even more cool-looking and awesome. Animations and physics have been significantly improved, great voice acting become even better and we even got immersive cut scenes. But the main thing that has received the biggest amount of attention from the creators was the combat system. Incredible melee encounters have been enriched with new acrobatic combos, special kick that disarms the enemies and a fleshed out dodging system, while still keeping all of the sweet stuff from the original game like supernatural powers, but with many more options to choose from. There’s also a full 360 degree movement and camera angle freedom.

When it comes to guns, this time Rayne receives the special pair called The Carpathian Dragons. These special weapons use blood as ammunition which we can replenish by feeding on our enemies. This means the blood system now served not only as health for Rayne but also as ammunition. And despise The Carpathian Dragons being technically one pair of guns, we gradually unlock a new fire mode for it. There’s a pistol mode, submachine gun, shotgun, grenade launcher or even a missile launcher. So more ways to crush our foes!

New features also included somewhat of an experience point system. When the blades on Rayne’s health and rage meters reach all the way to the end she’ll gain a permanent increase to both. This can be of course achieved by taking out enemies. What also should be mentioned is that in BloodRayne 2 greater emphasis has been placed on the level exploration element. More platforming and puzzle-solving have enhanced the gameplay.

In conclusion, BloodRayne 2 was a more polished title than its predecessor. We got improved presentation, production and gameplay mechanics all while keeping every element that made the original title so fun and amazing. We couldn’t really ask for more. And we’re thankful for that because it had to keep us entertained for the next 7 years before we get the next BloodRayne video game title.

Although that didn’t necessarily mean we wouldn’t see Rayne herself in other media. In 2006, 2007 and 2010 our dhampir appeared in three motion pictures. These video-game-to-movie adaptations allowed us to experience new chapters in Rayne’s story and had notable Hollywood talent as cast, for example Ben Kingsley as Kagan.

Another medium that also dived into BloodRayne’s world was a comic series that was heavily inspired by the games, and served as prequels to the first two. Most of the series was published by Digital Webbing, which started in 2004, and ran until 2009.

Finally, in 2011, new developer – WayForward Technologies, released a 2D side-scrolling platform game BloodRayne: Betrayal. Although it changed the original two games’ graphic style and genre, it kept the hack and slash combat of the previous titles in the series.

In Betrayal, Rayne has to battle and feed on blood in a brand new adventure. She’s recruited by the vampire-hunting Brimstone Society for one last mission. The target is a lavish, yet sinister ball in a secluded castle with plenty of dark and gruesome surprises. With the help of a mysterious friend and members of Brimstone, Rayne must infiltrate the manor, take out the fiendish horde, and stop an evil master plot once and for all.

We control Rayne through 15 chapters. The game locks us in rooms full of enemies that will need to be taken down in order for us to progress through the levels. We still fight with our twin blades and can also use the handgun or a special light cannon. A great portion of the game’s levels requires us to be jumping from platform to platform, avoiding spikes, learning enemy placement, and projectiles in order to succeed. Each one of the levels has multiple checkpoints that will replenish Rayne’s life bar when we reach them. The feeding system is still present and there are also collectibles that give upgrades like more ammo to the handgun.

And even though for many years it seemed like Betrayal was our last visit to the BloodRayne’s world, in 2020 we received a very, very welcomed surprise.

Ziggurat Interactive, video game publisher founded in late 2019 with the goal of reviving retro game titles acquired the IP for BloodRayne, and as a well-deserved tribute to these classic series they ordered a key members of original creators, Terminal Reality, to create a high-definition remaster of both BloodRayne and BloodRayne 2 subtitled BloodRayne: Terminal Cut and BloodRayne 2: Terminal Cut.

Both of them launched in November 2020 and are perfect revivals of original games. These remasters allow us to once again experience adventures of Rayne or discover them from scratch with improved textures, rendering, effects such as reflections, lighting, water etc., upscaled cinematics, support for modern gamepads, bug fixes and many more features!

BloodRayne is an absolute cult-classic series and we are incredibly happy that we can celebrate its 20th anniversary while reminiscing about how great and essential to the gaming world its titles were. Be sure to check out our Special Anniversary Sale and Ziggurat Interactive interview with Terminal Reality’s CEO Mark Randel. But most importantly, join us in celebration by playing those masterpieces yourselves. To the amazing 20 years and hopefully to more Rayne in the future!