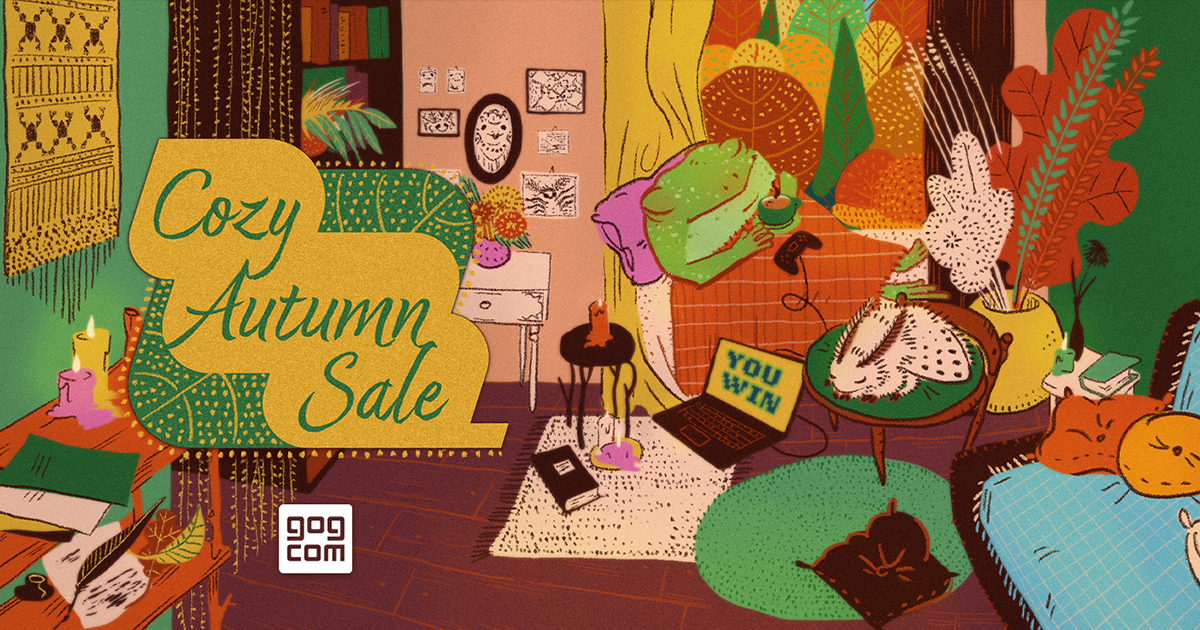 We can no longer pretend – autumn is here. And while it means that the nights are getting longer and the days are colder, it also means that it’s the perfect time to light up some candles, grab a warm blanket, prepare a cup of your favourite hot beverage and enjoy amazing titles that that will turn your evenings into moments of total relaxation and mental ease.

On Monday, we gathered such masterpieces in our ongoing Cozy Autumn Sale. In addition to that, Natalia Pych – CEO and editor-in-chief of grajmerki.pl, the first polish women’s gaming portal and at the same time a brand that fights stereotypes about female gamers, prepared for us her special selection of titles perfect for the season! Let’s dive in!

TOP 10 games for every autumn lover

The perfect game for autumn doesn’t exist? True. But actually, not really, because it does exist. And even more than one!

November is the best time to relax with a quiet, perhaps touching, or even strongly calming game. Outside the window it’s dark, cold and rainy, so it’s all the more reason to hide under a blanket with a mug of hot tea and fire up a pleasant, non-stressful game. And just such titles I have collected for you.

For a good start, something magical. After all, what is the autumn season more associated with than Halloween? Ghosts, witches and magic lead the triumph here! So you simply can’t do without creating potions. And there are a whole bunch of them in Potion Craft. The gameplay itself focuses not only on the very interesting mechanic of discovering more recipes, but also on taking customers, sometimes quite odd, and developing the trade.

GRIS is a game not only visually beautiful, but also, and perhaps most importantly, story-wise. It introduces the rather heavy topic of depression and dealing with the pain that affects us during our lives. In its almost textless form, it evokes a whole fever of emotions and is instantly written in the player’s memory. There is no death or stressful situations here. Instead, there is hope and a metaphorical struggle for a better tomorrow.

Since autumn ushers us into winter, it is impossible to pass up the beautiful Röki, filled with Scandinavian folklore. We play the role of Tove, who lost her brother in a tragedy. He was abducted by a mysterious beast that hid in a mysterious land. The girl sets out on a quest, while discovering ancient passages and fantastic characters, as if taken alive from Norse legends. As a whole, the adventure is kept in a charming atmosphere, in which there is no room for fear and uncertainty.

If you prefer to spend an autumn evening with something more funny than touching, Pilgrims may be the perfect game. The humor here is, admittedly, quite specific, but lovers of non-obvious jokes or funny, real-life situations should be satisfied. The basic gameplay takes about an hour to an hour and a half, nevertheless the game has several different story paths and to discover them all, you need to spend at least three times as much time.

I was captivated by The Sojourn a few years back, albeit not the first time. I needed time to get back into the game and give it a second chance. It paid off. As a logical game, The Sojourn presents players with many challenges and puzzles. The further we enter the forest, the more complicated tasks await us. However, puzzles are not everything. Along with them, we discover the history of the stone statues and the world that once existed.

At this time of year we are unlikely to see bees outside anymore, so if you miss summer and these hard-working creatures, there is nothing better than Bee Simulator. In the game, we play the role of a striped insect, which explores a colorful world. Along the way, we look for special species of flowers to produce better quality pollen. What differentiates this title from previous ones is the element of struggle for survival – mainly in clashes with malicious wasps and humans, who do not always appreciate our hard work.

I add The Smurfs – Mission Vileaf to this list with a laugh on my face. But one that is positive, not mocking. I could write a book about my history with this game. Children handle it supposedly well, and I was still defeated by it on the first map. I probably saw all the screens of death (I counted seven!) that the blue creatures could offer me. Nevertheless, I think that Smurfs in such a platformer form will meet the expectations of many lovers of the genre. Moreover, I will admit that I would be tempted to play this game myself, having heard that it can feel a bit soulslike.

A beautiful, touching and extremely emotional game in which the last living fox leads us through its history. We watch as he and several puppies struggle to survive in a world destroyed by man. As a fox mom, we have to make sure that the whole animal family not only survives encounters with predators, but also manages to take shelter from more natural dangers. Once you finish the game, it’s hard to put it out of your mind for a really long time.

Although strategy games are not usually considered very relaxing, Dorfromantik delights from the first minutes. We start the game with randomly selected tiles, which may include a forest, a farm or a water source, among others. Our task is to arrange successive tiles in such a way that they match the surroundings. As the map expands, we discover new biomes and special missions, often related to what is on a given tile. However, we don’t have to stress about it, as the game’s fairy-tale color scheme soothes the senses, and the lack of violence, resource management or trade organization saves us from unnecessary stress.

Finally, as the icing on the cake, I left Little Misfortune. In it we meet a certain eight-year-old girl. Suddenly, the narrator announces that the girl will die the same day, and we as the player can only watch what will lead to this death. From then on, we are confronted with a series of decisions, each of which, literally each, can completely change the fate not only of ourselves, but also of many characters (not necessarily human) around us. However, the production is so absurd that it can be a great respite from everyday tensions and help combat autumn melancholy. After all, who would disdain a gnarled duck or wine mistaken for juice? Don’t be fooled by appearances, however. It’s still a game with a message, directing our attention, among other things, to the lack of empathy in the world. And, like Endling, it will shed more than a few tears from you.

I hope you will find something in this list that will make your autumn evenings more pleasant. I’ve even heard that a special curse is being created to be cast on those who don’t purchase any of the above games during the ongoing Cozy Autumn Sale. So which title will you give a chance?

We’d like to thank Natalia very much for her recommendations! Don’t wait to check out the selected titles and see if your impression of them is similar.