The queen of adventure games. How Roberta Williams changed history

In March 2020, Williams received a Pioneer Award during the 20th Game Developers Choice Awards. Throughout history, only a handful of game designers have deserved such recognition as Roberta Williams. Not only was she a co-founder of Sierra On-line, but also the mother of classic adventure games like King’s Quest and Phantasmagoria.

The year was 1979 and nothing, absolutely nothing, indicated that Roberta Williams (née Heuer) would soon become one of the most iconic video game pioneers. At the time, she was a stay-at-home mom with two kids. Her husband, Ken Williams, was a freelance programmer. All in all, the Simi Valley, California household was pretty typical. 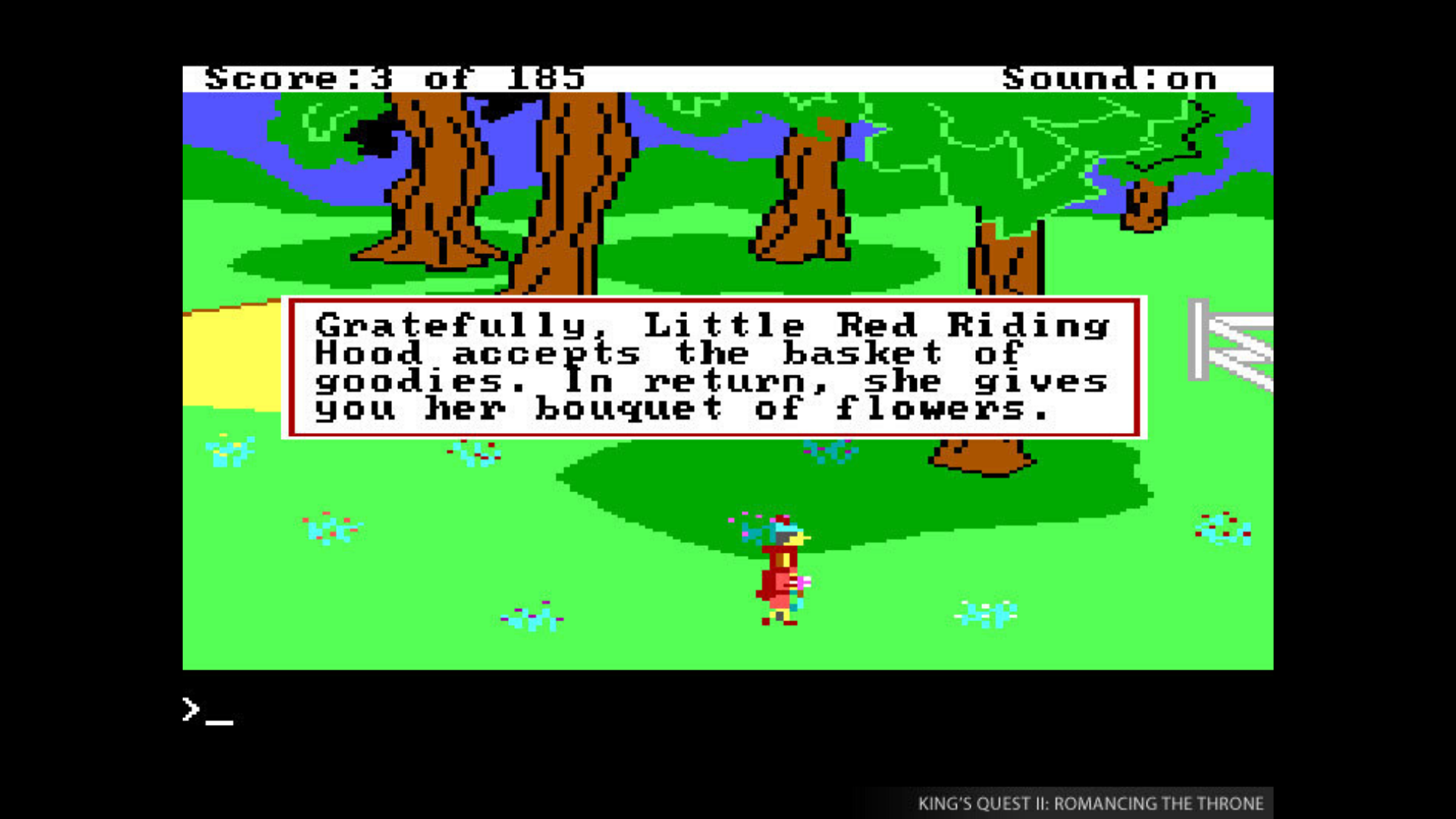 And then, lightning struck. One day, Roberta Williams witnessed the game Colossal Cave on her husband’s teletype machine. It was a very crude text adventure game, but it captivated our heroine for quite a period of time. It is one of those moments in history when two ideas meet and, as they say, the rest is history.Roberta Williams didn’t have any experience in computers but had something more. Even when she was a child, she was a great storyteller and entertained her family with fantastic stories, which she called “films”. Ken Williams on the other hand, wasn’t a storyteller, but some computer programming experience. So, they thought, why not make a game of our own?

The first adventure game by the Williams’ couple was called Mystery House. The story was set in a Victorian Era estate in which the player’s friend was killed. You were tasked with solving the murder case before becoming the next victim. Roberta Williams based the game’s story on her beloved Agatha Christie novels. She drew digital images on a digitizer board while Ken used assembly language to script them. The final game was made to fit on just one floppy disc.The game was welcomed very warmly by computer gamers who praised its graphics and story. Mystery House was a milestone in adventure games development and it also proved to be a breakthrough for Ken and Roberta Williams. They formed their company On-line Systems (from 1982, Sierra On-line) and started to develop video games full-time. 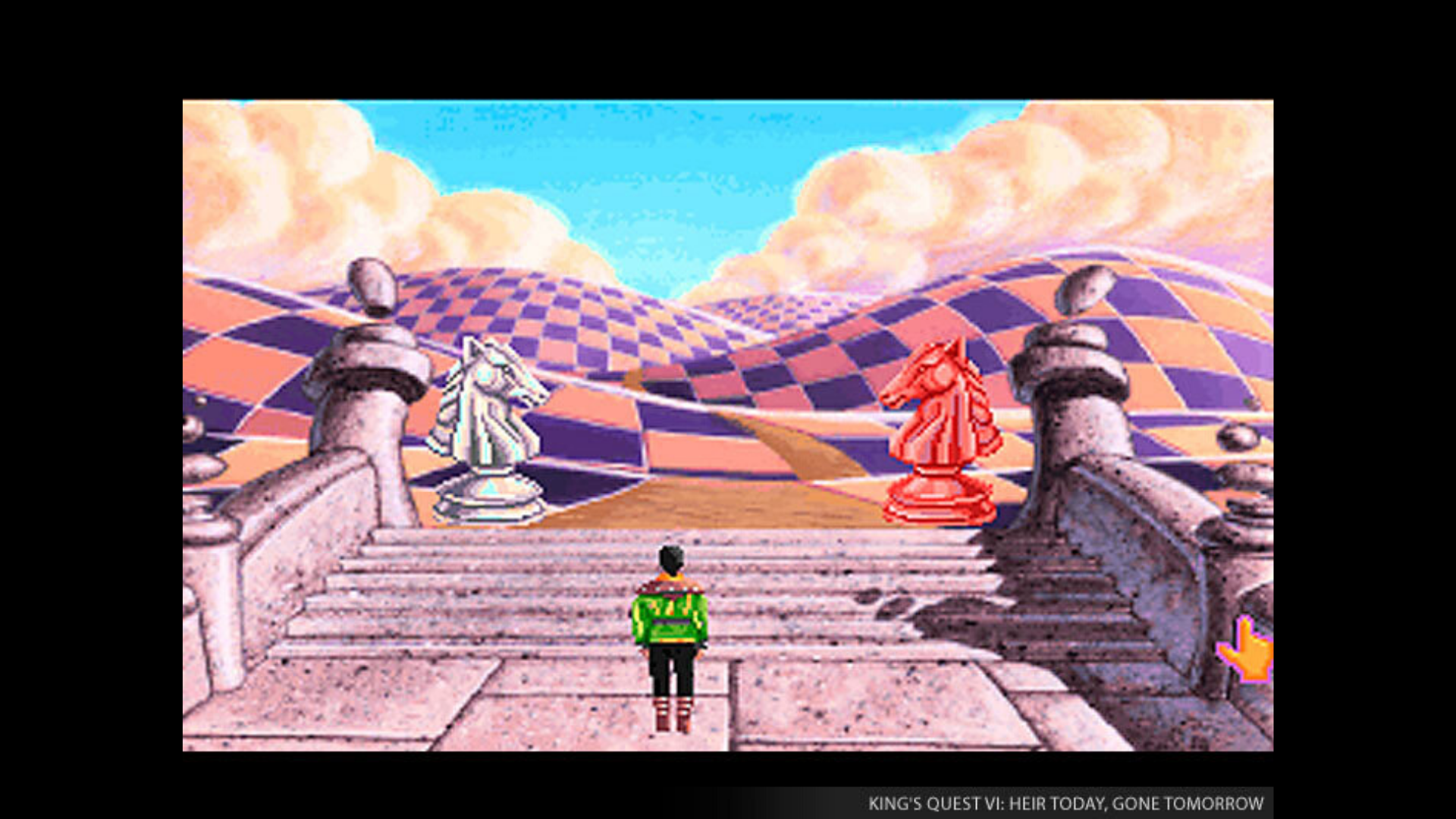 In the coming two decades Sierra went on to develop many cult adventure games. Let’s mention here the horror mystery trilogy by Jane Jensen - Gabriel Knight: Sins of the Fathers, Gabriel Knight 2: The Beast Within, and Gabriel Knight 3: Blood of the Sacred, Blood of the Damned. Thanks to the comedian and musician Al Lowe, Sierra On-line enriched its portfolio with humoresque and slightly erotic game Leisure Suit Larry, and its further installments, like the cult Leisure Suit Larry: Love for Sail! title.Other great series included Police Quest (the entire collection is DRM-free on GOG.COM), and its tactical spinoff - SWAT. Finally, we have to mention a sci-fi flick called Space Quest with its six parts spanning across the 1980s (parts 1-3) and 1990s (parts 4-6). Yet, in terms of importance for the computer entertaining world, all of them must give way to Roberta Williams’ proud brain-child, namely the King’s Quest series. 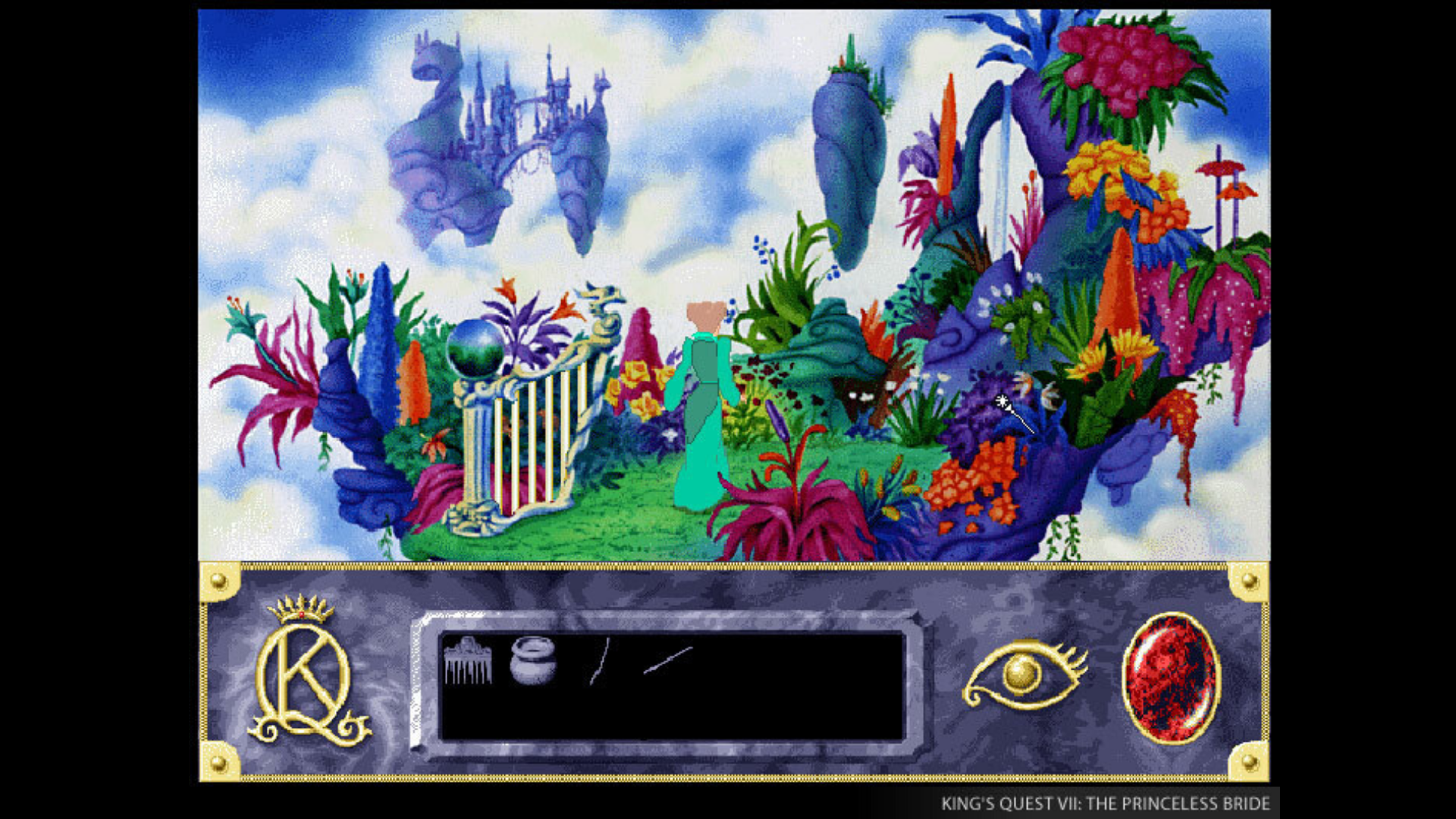 The three first parts of the Daventry's royal family saga were in many ways highly innovative. For example, the first King’s Quest game was one of the first point and click games. We could move our main hero, a would-be king Graham, through the fantasy realm while using text commands and a computer mouse. On the other hand, the fantastic third part of the series required the player to count the real-world time to finish some of the puzzles and escape the evil wizard’s mansion.The further three parts of the series remained in the vanguard of innovative adventure games. For example, the fourth King’s Quest was one of the first video games featuring a female protagonist, namely Princess Rosella. The fifth part of the series had a breakthrough 256-color VGA graphics and icon-based interface. It sold in 500,000 copies - a record unbroken for five years since its release in 1990. Then came King’s Quest VI with its cinema-like main song “Girl in the tower” and great voice actors, like Robby Benson who voiced Beast in Disney’s Beauty and the Beast. Williams worked with Jane Jensen on this part, paving her way to developing the Gabriel Knight series.At that time Roberta Williams already had something more ambitious on her mind. She decided to create a unique mix of an adventure horror game and an interactive movie with live actors. That’s why she left much of the work on animated Disney-like King’s Quest VII to Lorelei Shannon, while a few years later leaving the 3D hack n’ slash King's Quest: Mask of Eternity to Mark Seibert.

As Williams stated in her later interview, the whole project was her favorite of all time: “If I could only pick one game, I would pick Phantasmagoria, as I enjoyed working on it immensely and it was so very challenging (and I love to be challenged!)”. The scale of the Phantasmagoria project was very impressive for video games in the early 1990s. To create a realistic horror video game Sierra On-line needed 25 live actors, 500 pages of script and almost 4,5 million dollar budget.The story about Victoria Morsell, a book author discovering the secrets of an evil mansion was in many ways an opus magnum for Roberta Williams. While working on Phantasmagoria she could use all her love for mystery novels and the experience from other video game projects. For here - it went even further. Now “films” she told her family in childhood were brought to life by actors and a production set that closely resembled Hollywood movies. 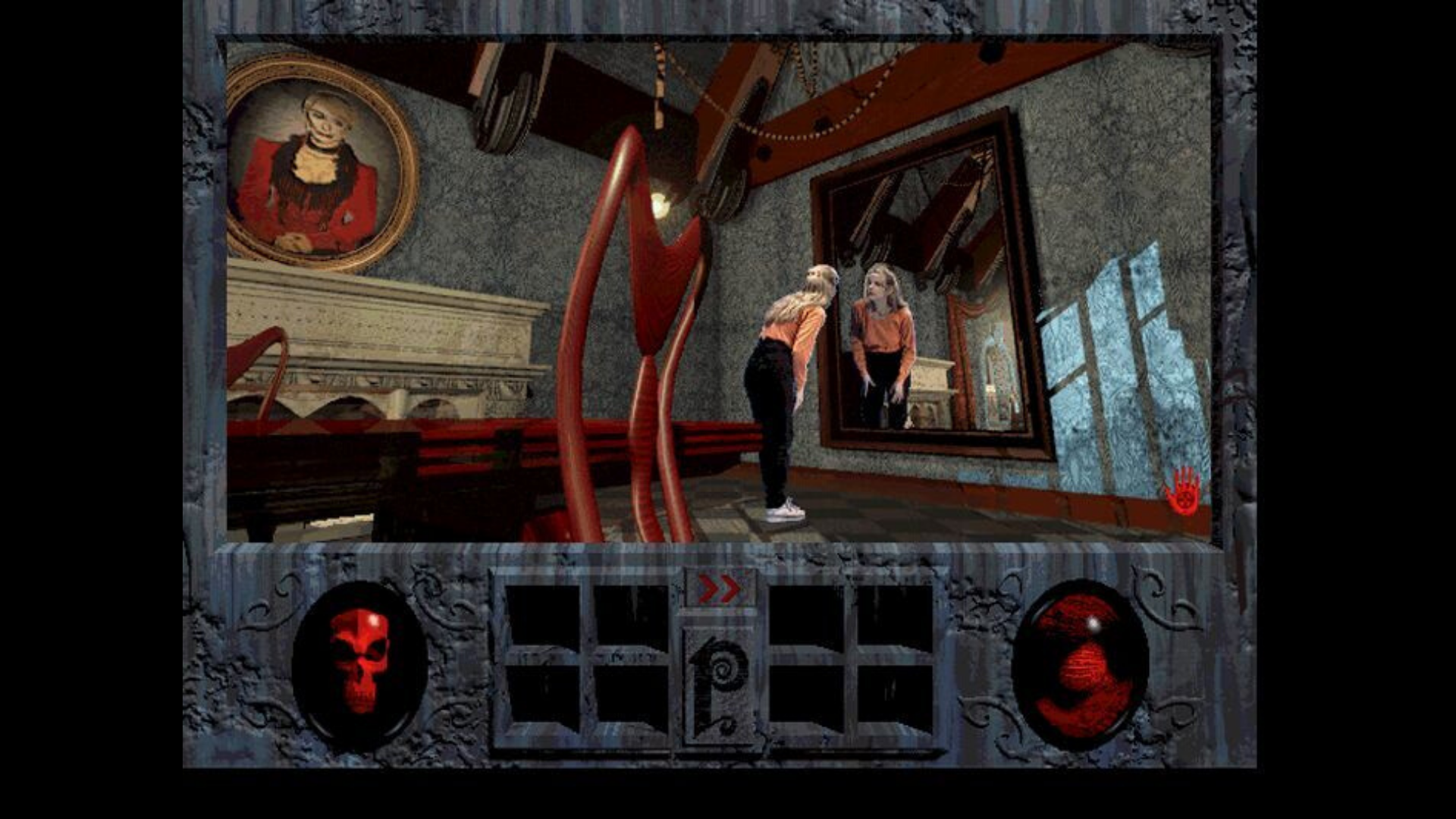 At the same time, Roberta Williams became a story consultant for another cult and atmospheric horror game - Shivers. Both Phantasmagoria and Shivers games are available DRM-free on GOG.COM.

Legacy still in the making

In 1999, after two decades of creative work, Roberta Williams decided to retire from the video game business. She has gone on to enjoy a peaceful life reading books, playing video games, and traveling around the world. Occasionally, her huge legacy catches up with her, just like in the case of the mentioned Pioneer Award during the 20th Game Developers Choice Awards. After retiring, she announced that she’s considering writing a novel. Well, if the book is even half as revolutionary as her games then we can’t wait to read what will almost certainly be an innovative, unique title.
See comments (44)