Everything we know about Cyberpunk 2077

UPDATE: Now with preload and release details!The time to dive into the fascinating, futuristic world of Night City is almost upon us. That’s why, as the clock keeps counting down to the game’s official premiere, we’ve decided to gather all the important stuff about Cyberpunk 2077 in one place.On the 10th of December, the much-anticipated game from CD PROJEKT RED will come to life on millions of computers and consoles around the world. Set in a dystopian, sci-fi universe created by Mike Pondsmith, Cyberpunk 2077 will take us to a huge open world, soaked in neon lights and a kitsch art style. Thanks to cybernetic enhancements, its inhabitants can access the omnipresent Net almost any time they want and they can also modify their bodies in countless ways, making it a lethal weapon or simply a fashion statement.

Night City is a bustling metropolis situated in the Free State of Northern California. It’s 2077, seven years after the Unification War spread across America, and let’s just say that things aren’t looking pretty. Night City has just been voted “the worst place to live” on the continent, yet where some people fear danger, others see opportunity. V, the main character of the game, definitely belongs to the second group. When we meet our hero, they are working as a mercenary for a fixer named Dexter DeShawn. After one of the assignments goes terribly wrong, V is contacted by a mysterious revolutionary figure, Johnny Silverhand (played by Keanu Reeves). Of course, we don’t want to spoil anything more, so let’s stop the plot-explaining right here. ;)

In Cyberpunk 2077, our hero is highly customizable. Apart from their appearance, along with details like eyes and hair color, body shape, or tattoos, we can select our character’s Lifepath from the three distinct options available. Our choice will not only affect the character’s stats and traits but also will give them a unique narrative background.• If you choose the Nomad Lifepath, the hero will come to Night City from the polluted Badlands, where independence and resourcefulness are top qualities.• If you decide on the Streetkid Lifepath, the main character will know more about life on Night City’s crime-infested streets.• Finally, if your choice is the Corporate Lifepath, you’ll be skilled in the subtle art of intrigue, honed in the corridors of the Arasaka megacorporation.After creating your own character, it’s time to explore the game’s awesome universe!

Night City is a vast metropolis, with over 6 million inhabitants, all living their lives and constantly on the move. Surrounded by the inhospitable Badlands, the town is divided into six districts, each one with its own unique background and architecture. Places like Pacifica, a run-down tourist district, or the cramped Santo Domingo are quite dangerous. On the other side of the spectrum, you can visit City Center, with its breathtaking skyscrapers and Corpo Plaza, or Westbrook, the most prestigious part of Night City. Somewhere in between are the Heywood and Watson districts, relatively rich, but still penetrated by the street gangs.Speaking of street gangs, eight big gangs roam the streets of Night City. Among them you’ll find:• 6th Street - a gang consisting of hardened veterans of the 4th Corporate War • Animals - bodybuilders who distrust any cyberware enhancements• Maelstrom - extreme fans of implants and powerful, illegal cyberware• THE MOX - an anarchist group that unites outcasts from various groups• Scavengers - infamous for kidnapping people and harvesting their cyberware• Tyger Claws - owners of widely illegal entertainment businesses• Valentinos - a loyal family gang that idolizes Santa Muerte• Voodoo Boys - the best netrunners and master hackers in Night CityOf course, during your stay, you’ll encounter other, smaller criminal groups. They all have different qualities and goals but have one thing in common – you better not cross them unprepared.

In contrast to previous CD PROJEKT RED games, Cyberpunk 2077 is an FPP game. This lets you immerse yourself fully in the game’s world, and makes using all the weapons provided to your character much easier, and satisfying, to use. The arsenal V can use in Cyberpunk 2077 is huge! Revolvers, machine guns, shotguns, pistols, knives, swords – you name it! 12 corporations produce weapons distributed on Night City’s streets – from top tier arms from Arasaka, to Rostovic products that almost anyone can afford. As for types of weaponry, you can choose from power weapons, tech weapons, smart weapons (with guided ammunition), and melee weapons (along with razor-sharp katanas). In many cases, once you’ll find your favorite arms’ type, it’s up to you to customize its parameters.The same diversity applies to vehicles you’ll encounter in Night City. 12 car manufacturers will supply V with cars. This includes luxurious Herrera and Rayfield vehicles to middle-tier cars from ThorTon, and even small, cheap cars from Makigai. It’s already confirmed that one of the game’s best cars will be a 1977 Porsche 911 owned previously by Johnny Silverhand. Natural born rebels can chase the wind with motorcycles from Yaiba or Arch (a real-live company owned by Keanu Reeves). There are also military vehicles from Arasaka and Militech corporations, but getting behind the wheel of one of them may prove quite the challenge!As we already mentioned, another one of Cyberpunk 2077's important features is cybernetic enhancements, which can turn your body into a killing machine. Cyberware can modify your character’s stats, with two important limitations – how much your body can take in, and how much your wallet can give out. Cyberware also gives our hero a gate to Braindance, a sort of personal version of the net. Thanks to it, you can not only indulge yourself in virtual reality pleasures but also access other people’s memories in extreme cases.As you can see, the lore of Cyberpunk 2077 makes it deservingly the most anticipated game of 2020. Get the game on GOG.COM and on December 10th receive your exclusive digital comic book, Cyberpunk 2077: Big City Dreams, as well as other cool digital goodies. With every purchase, 100% of your money goes to CD PROJEKT Group.If you’re looking to play Cyberpunk2077 as soon as it’s available, here’s a map with global PC release timings: 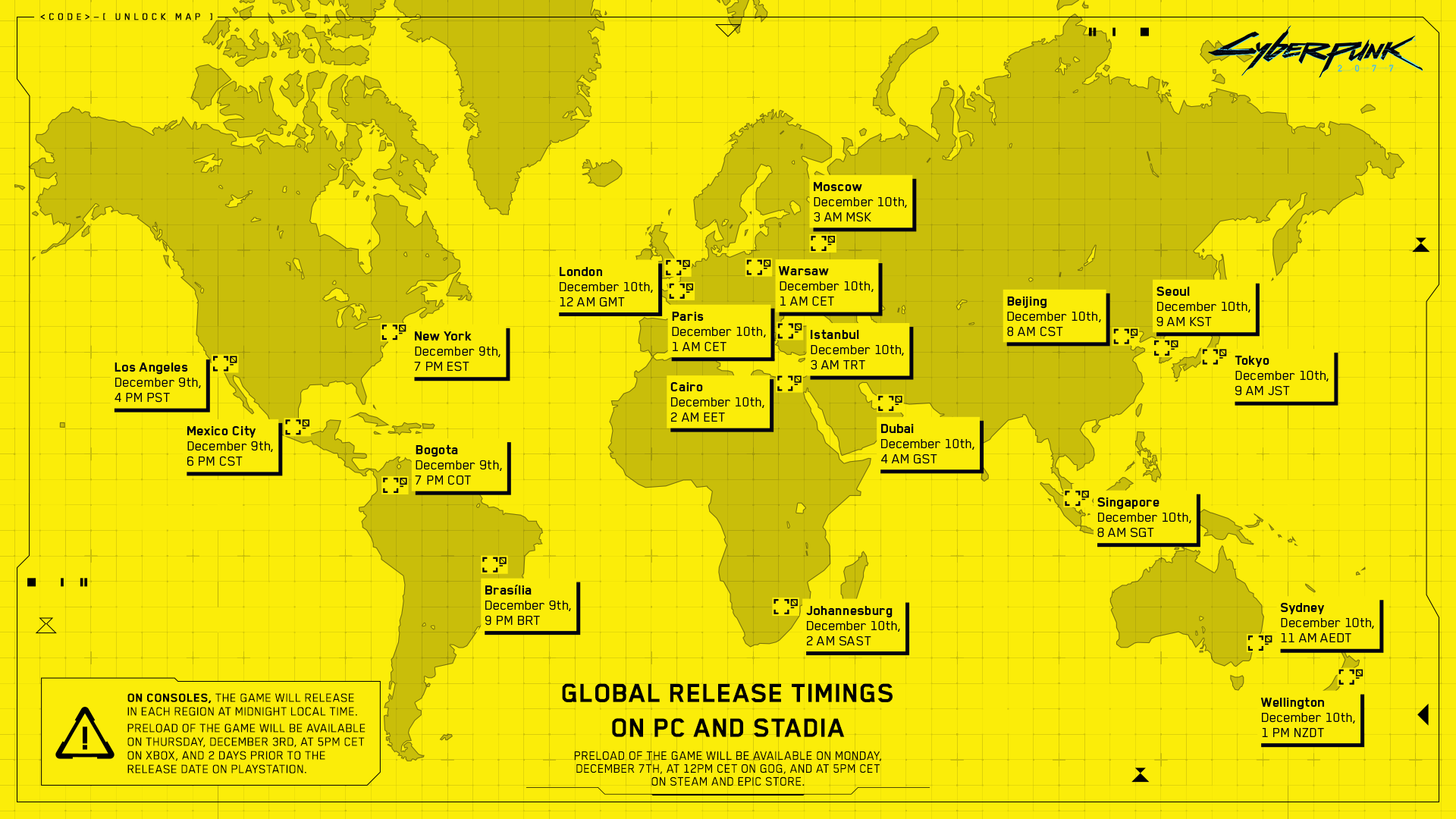 As for the Cyberpunk 2077 system requirements, they can be found here.
See comments (163)