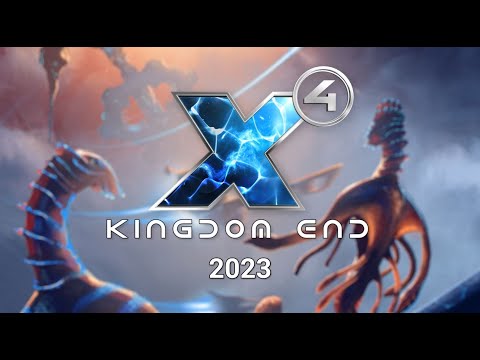 An expedition into the unknown
Heretic's End holds a secret to be discovered. Flickering lights on a previously inactive jump gate are causing a stir. Joining forces in the name of cooperation, a multifactional expedition sets out to investigate the phenomenon. Prepare for an immersive story of collaboration, where many vastly different minds must pull together for the greater good.

Unique new ships will take your breath away
Boron ships are as unconventional as you would expect from such an extraordinary species. X4: Kingdom End introduces a wide variety of Boron ships of different classes, which excel with their fluid designs, their wavelike shell animation, and their distinctive grace and uniqueness. Come aboard and experience what may very well be the most breath-taking ships in the X-Universe. Among others, you can look forward to:

Ray (Destroyer)
As though it had just emerged from the water, and was waiting for its prey with bared teeth, the Ray destroyer impresses with its delicate construction. But, one should not be dazzled by it for too long; even the normally peace-loving Boron will defend themselves if necessary.

Shark (Carrier)
With its sweeping form and a dynamism all of its own, the Boron XL carrier immediately casts a spell over anyone who sets eyes on it. Perhaps its greatest surprise, however, is easily overlooked at first glance. With the ability to have smaller ships dock and launch from the side, the carrier provides a distinct advantage on the battlefield that should not be underestimated.

X4: Foundations 6.00 Update
X4: Kingdom End is being released at the same time as the extensive 6.00 update for X4: Foundations. As is our tradition, we will once again be introducing a number of significant improvements to the base game in this major, free update for all X4 owners. We won't be able to show the full changelog until a later date, but X4 players can already get excited about the following upcoming 6.00 improvements: