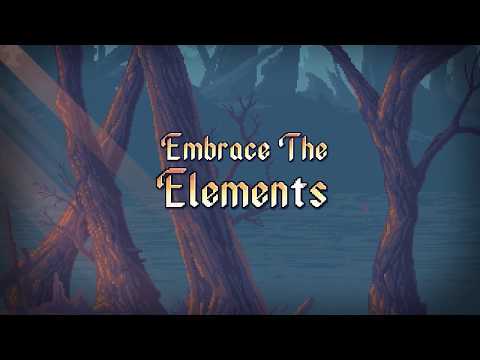 REUNITE YOUR VILLAGE
In a world where magic has all but died out, you've been branded a witch by villainous forces who fear your elemental power. Outsmart the superstitious armies of the Arch Duchess as they hunt you through lush forests, deep caverns, and over frozen mountaintops. Find and free your fellow villagers from captivity, then lead them to safety and reclaim your home.

CONTROL YOUR ENVIRONMENT
Throw fireballs to set the world ablaze and terrify your foes. Freeze water to cross impassable lakes, or trap enemies in ice. Move earth itself to grow grass to hide in, or vines to climb and reach new heights. Grow your connection with the elements to learn new abilities, but beware: fire will spread and consume everything in its path – including you!

PLAY YOUR WAY
Creep through tall grass and conceal yourself in smoke to slip by enemies unnoticed - or burn everything in your path to make your foes panic and flee. Use your enemies’ fear against them to create opportunities to slip past, or trick them into their own demise. Wildfire lets you play as a ghost, a pyromaniac, and everything in between.

INTELLIGENT, CHALLENGING ENEMIES
The knights, archers, and trained attack bobcats who pursue you will intelligently work together to hunt you down. They will investigate sound disturbances, communicate with each other, and coordinate to close in on your position. Only by turning your environment against these foes can you overcome their superior strength.

TWO PLAYER LOCAL CO-OP
Wildfire can be played entirely in singleplayer, or in two-player, local co-operative mode on the same screen. Use your elemental powers in tandem with one another to find entirely new ways through Wildfire’s dense, systemic environment.
Popular achievements