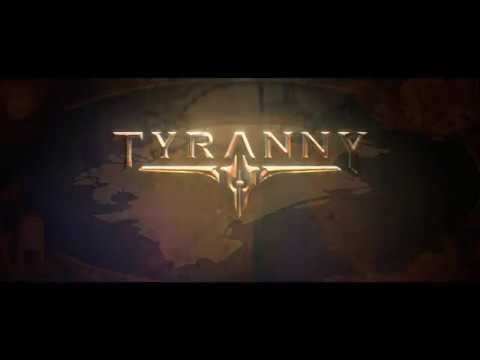 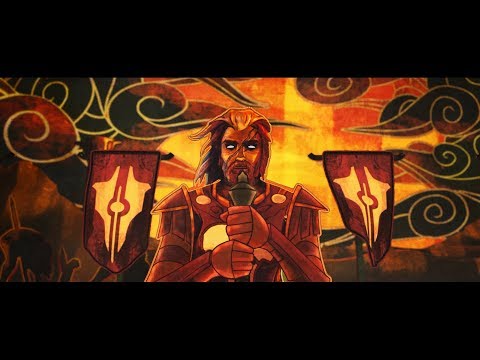 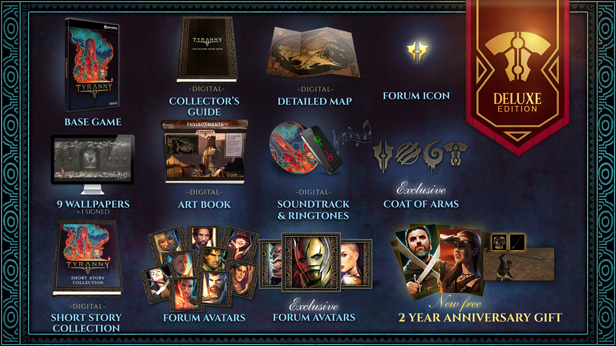 Tyranny - Deluxe Edition includes the following:
- Base Game
- Ringtones: three notification tones and one ringtone
- Overlord Edition Forum Icon (for Paradox Plaza only)
- Forum Avatars (for Paradox Plaza only)
- Exclusive Overlord Editions Forum Avatars (for Paradox Plaza only)
- Digital Original Soundtrack: The Tyranny soundtrack delivers 57 min of original music, including a total of 18 tracks.
- Official Soundtrack - Deluxe Edition: The digital Tyranny soundtrack includes over two hours of music across 43 tracks, including the scores from Bastard's Wound and experimental music from the game's development.
- Digital High-Resolution Game Map
- Exclusive Coat of Arms: Adds 4 unique coat of arms to the Fatebinder’s selection of personalized war banners – show your allegiance with either The Disfavored, Scarlet Chorus, Tunon the Adjudicator, or Kyros the Overlord.
- Short Story Collection: A rich digital collection of ten short stories from the world of Tyranny, giving readers a deeper look at the brutal world and powerful characters that live under Kyros’ rule. Written by the creative team behind Tyranny, these stories introduce several of the game’s companions and key characters. This collection includes 3 exclusive tales never seen before, alongside 7 originally published on the official Tyranny website.
- Digital High-Resolution Wallpapers: Add your desktop to Kyros’ domain with a selection of high-quality artwork from Tyranny, sized for PC desktops in high resolution. The collection includes ten different pieces from the Tyranny art team, including one signed by the developers.
- Digital Collector’s Guide Book: Discover the lore and secrets of Tyranny in a comprehensive world guide from author John Helfers. Explore artwork from the game alongside the stories of the people and places of the Tiers, and discover the world that Kyros has brought to heel. Includes a foreword from Obsidian Entertainment.
- Digital Art Book: Immerse yourself in the war-torn world of Tyranny in an extensive collection of original artwork.