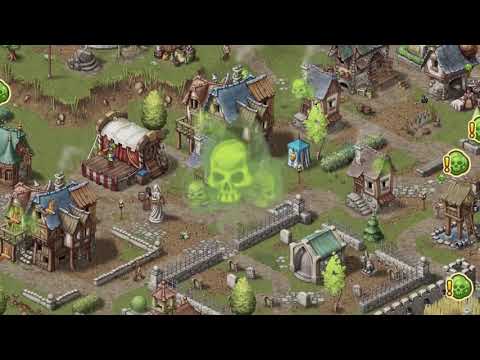 Overcome the challenges that lie ahead. Your citizens have various needs in order to stay happy. And you have to keep them happy, to keep the tax coins rolling which you need to build even more. Beware, as there are many things in the world that will disturb the happiness: Seasons will change the demand for certain goods – more water is needed during summer, more clothes in winter. Catastrophes may hit your prospering city, the plague, a large fire or an avalanche won’t make anyone happy nor will a bandit attack!

A huge variety of houses to build and many different jobs for your subjects will keep you busy. The armory will produce weapons for your soldiers, to keep your citizens save from bandits. The bakery or the butcher’s workshop will provide food, the monastery, the juice manufacture and the vineyard will bring the drinks – and everything can be bought at the marketplace! Make sure to have an eye on the daily routines of your people – besides jobs & food, they also need a place for recreation like a park, houses to live and entertainment in the jousting grounds or the tavern!

Each of your deeds is meaningful: If you order your folks to build a house, if you send them to a new job – everything will reward you with experience points. This progression system will allow you to research techniques that for example increase the amount of taxes you get or make your watchtowers more efficient. In every map you play!

An honorable Governor I
Earn 250 Prestige by completing quests.
common  ·  34.3%

A new beginning
Complete the first chapter of the tutorial campaign.
common  ·  58.58%

Friends from the past
Complete the second chapter of the tutorial campaign.
common  ·  48.54%

Time for some trade
Complete the third chapter of the tutorial campaign.
common  ·  38.51%