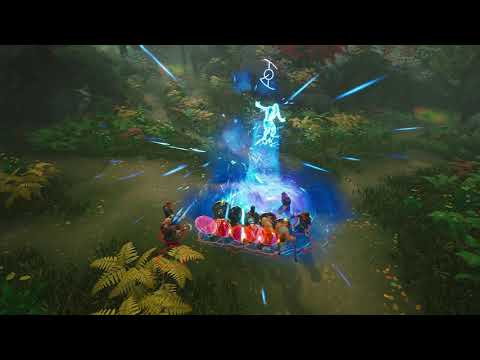 Why buy on GOG.COM?
DRM FREE. No activation or online connection required to play.
Safety and satisfaction. Stellar support 24/7 and full refunds up to 30 days.
The Waylanders
Description
AN EPIC STORY INSPIRED BY CELTIC MYTHOLOGYThe first meeting between the Celts and their gods, the Tuatha de Danaan, should have been a time of celebration and enlightenment, but when negotiations go catastrophically wrong, a battle against a god leaves you near death and untethered from time!...
User reviews
3/5
{{ review.content.title }}
Product details
2022, GATO STUDIO, ...
System requirements
Windows 7/8/10 (64-bit), Intel CPU Core i5-7600K 3.8Ghz / Ryzen 7 1700, 8 GB RAM, Nvidia GTX 1060, 4...
Description

The first meeting between the Celts and their gods, the Tuatha de Danaan, should have been a time of celebration and enlightenment, but when negotiations go catastrophically wrong, a battle against a god leaves you near death and untethered from time!

Return to a land overtaken by magickal corruptions and a kingdom splintered into multiple factions warring for the throne. The Celtic society, a complex tapestry of different religions, human cultures, and mortal and immortal races such as the Mourians, Werewolves, Goblins, and monsters threaten to tear at every seam. Will you support the immature, yet rightful, heir, or the pragmatic general in their bid for the throne? What alliances will you forge, what friendships will you foster, what romances will you pursue, and... what will you do when you are suddenly thrust into Medieval Spain?

Things look pretty different in Galicia under Christianity than it did under Celtic rule. Magic is fading, religion is everywhere, and much has changed. Where are your immortal allies now, and what has become of the souls of your mortal friends? Discover changes made to the land over a thousand years of cultural change. Could the corrupt magicks that interfered during your meeting with the Tuatha have led to the destruction of all that the Celtic world held dear?

The Waylanders draws inspiration from classic RPG, opening up a world of adventure for you and your companions to explore. Use real time with pause to strategically select party member combat spells and abilities to defeat roving bandits, rampaging beasts, monsters of legend, and more!

Discover a treasure trove of weapons, armour, trinkets, and more to outfit your party through your journey. With gods standing in your way, you’ll need every edge you can get.

The companions who set out alongside you on your journey make a massive difference in how you’ll overcome enemies. Different party class makeups grant a variety of Formation options, each with powerful offensive and defensive abilities. As you level up, unlock new classes, and explore, you’ll discover new Formations and formation abilities to add to your roster.

The Waylanders is an exciting fantasy RPG inspired by classics such as Dragon Age: Origins, Neverwinter Nights, and Baldur’s Gate.