The Siege and the Sandfox 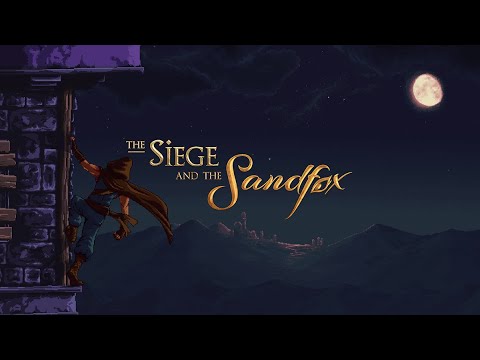 GAMEPLAY
Use stealth to sneak through the environments, incapacitating enemies or ghosting past as if you were never there. Run, jump, slide, shimmy, pole swing and more as you navigate the intricate game world, finding new items, equipment and skills, and unlocking previously inaccessible locations.
The Siege and the Sandfox is a stealth Metroidvania with one giant continuous world, linking the newer palace above, older prisons below, the ancient mausoleum, and an intricate network of caves woven amongst them all. Encounter unique enemies in each area - some more capable at pursuing sneaky Sandfoxes than others! Keep on your guard, as even an extinguished torch or door left open can trigger the suspicions of those out to get you.

STORY
A shining city lies besieged in the heart of a vast desert. As the moon rises over the royal palace, a notorious assassin watches the king die to a traitor’s hand. Discovered, falsely accused and thrown into the labyrinthine dungeons below, they must escape to tell the tale else the city will fall.
The Sandfox – known as the Kasha’i – is famed across the land as the legendary line of faithful protectors and servants to the crown. The current holder of this mantle has been left for dead at the base of ‘Traitor’s Fall’ - a deep pit leading to the depths of the underground prisons. Betrayed by the Queen in order to hide her regicide, you must now take on the role of the Sandfox and begin your journey back up to the palace. Save the kingdom from the Queen’s evil plot and reap revenge with the iconic weapon of the Kasha’i: the glass dagger.
In your journey through the dark caves, dusty mausoleums, dangerous prisons, and crumbling ancient architecture, you will need to avoid the nastier inhabitants of this underground world and aid those friendlier to a new face. Your progression will lead to the discovery of the true threat to the kingdom above: a sand-borne evil emerging below. As dusk becomes night, and night becomes dawn, you will need to rely on the aid of new allies, make your way back into the palace, and end the treachery of the wicked Queen.

The Siege and the Sandfox ©2023 Koch Media GmbH. Published by Koch Media GmbH, Austria. Developed by Card Board Sword Ltd. The Siege and the Sandfox uses the Unreal® Engine. Unreal® is a trademark or registered trademark of Epic Games, Inc. in the United States of America and elsewhere. Unreal® Engine, Copyright 1998 – 2023, Epic Games, Inc. All rights reserved.