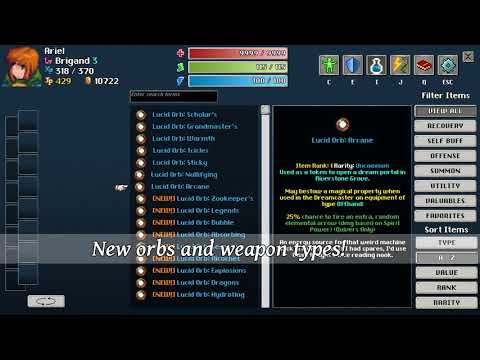 Something has awakened Tangledeep's oldest creatures from their deep slumber, unleashing untold dangers upon the world! The Frog, Jelly, Echo, Tyrant, and Bandit Dragons are incredibly powerful boss monsters whose strength scales to the player's level. Discover their mysteries and face them before it's too late!

Each Dragon resides in their own multi-floor dungeon, each of which sports new layouts, mechanics, and monsters. Defend vinelings from stampeding hordes of monsters in tower defense-style gameplay, fight alongside an army of Jellies to win back territory, tread among resurrecting ghosts, floor traps, gates, teleporters, and more.

Encounter a helpful new NPC in town who offers a wide variety of item crafting recipes. Here are just a few useful examples!

A fresh new weapon type for adventurers at any stage in their quest! Whips use a mix of Strength and Swiftness to attack an enemy and everything surrounding it, making it an excellent choice for fighting groups of foes. Its Weapon Masteries further specialize into area damage, adding attack debuffs like Root and Paralysis as well.

Magic mods (affixes and prefixes) are at the heart of Tangledeep's equipment and character customization. With Dawn of Dragons, you'll find 24 exciting new mods that can completely change or enhance your build! Strip enemy buffs with your two-handed weapon, surround yourself with an energy shield, fire exploding arrows, get a Coolfrog companion, and even summon champion monsters to fight for you. These are just a few of the new powers available!