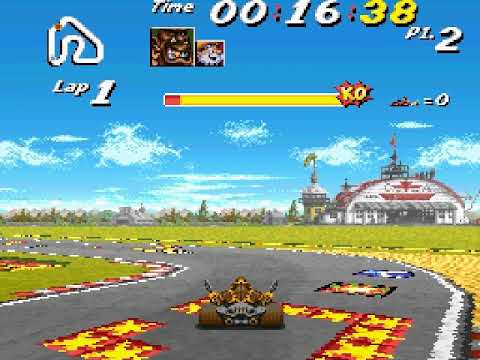 Advanced artificial intelligence gives the game s cars the ability to adapt to the player s performance. The better you are, the better they perform, providing unlimited challenge even for the most seasoned racer.

Street Racer features 27 challenging game tracks (three of them hidden), four difficulty levels and eight cartoon opponents with names like Frank Instein, Green Machine and Surf Sister. Each character wields special weapons ranging from towels to the ability to fly, and each also has a special musical theme reflecting his or her personality.

For maximum variety and challenge, the game offers multiple race options ranging from one-lap sudden death races to endurance contests up to 80 laps, plus a choice of four different gameplay modes. These include a practice option where players can test their skills against any driver; a basic Head-to-Head mode for two players racing on one selected track; a Championship mode that allows players to design their own race, mixing tracks and difficulty levels if desired; and a Rumble mode that lets you knock your opponents out of the ring.

The game is also packed with special surprises, including hidden tracks and characters, and bonus points that make it possible to win a race without finishing in first place. Players receive extra points for causing damage to other cars and for finishing a race damage-free. Cars that incur damage are penalized with slower performance. Repair kits available along the track can reverse the damage. And turbo boosts that can be picked up along the way provide short bursts of super-speed.

Both SNES and DOS versions are now available. You can switch between them in GOG Galaxy. Go to 'Manage Installation' -> 'Configure' -> 'Beta Channels'. You can also download both offline installers in 'Download offline backup game installers' section of your library.