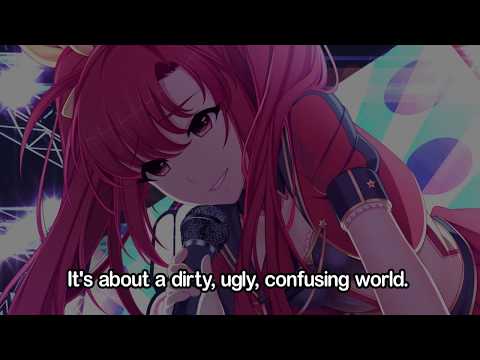 The girls of Starnova are back in a new business simulation game! Due to the underhanded machinations of the evil Golden Calf Productions, the girls' live has been cancelled, and what's worse, their talent agency has had to relocate to a new office!

This time, it'll fall upon Producer-san to turn this dire predicament around! As the girls' manager, you'll have to build your office, re-hire the girls, and of course, get the money flowing back by putting on the greatest lives in the nation! Do you have the management skills to once again accomplish everyone's dreams? Now, you must take the reins as Producer-san and save the day!

Real time business simulation.
Work against time to turn your small idol business into an empire! This time, it's all about building your office, managing your talents, and MAKING MONEY!

The girls are back.
Make the seven girls of Starnova into national icons by managing their careers! Train the girls to increase their skills and unlock special abilities. Who knows, maybe if you do a good job, other girls might join Starnova too!

Build your office.
Build new rooms to train your idols! Not only that, but you can record songs, impress business partners, and even help the girls relax after a tough day of work, all by constructing your own state of the art talent office!

Train your talents.
Increase your idols' skills by building training facilities for them! Unleashthe girls' ultimate techniques to blast away the competition! Pick your center and unlock her hidden abilities!

Sign business deals.
All this training isn't for nothing! Get the girls signed up for product endorsements, television appearances, live events, and everything else in an idol's life. But you must balance the needs of the girls and their jobs at the same time! This is where your skills really shine, Producer-san!

Record hit songs.
Do you have what it takes to make the next classic idol song? Hire composers, record your girls, and even shoot a PV! And most importantly, make your songs sell!

Keep your talents happy.
It's your duty to protect their smiles! If you mismanage your talents, they might develop weird illnesses and be no longer able to perform! You don't want any more bad ends!

The Battle of the Idols.
Get payback on Kamijou and Golden Calf Productions by fielding the
best of the best at in the Story Mode! But better watch out! The girls of Quasar are back, and they're willing to do anything to win!

The captain has crashed the ship, and so the girls of the Sunrider must work as idols to buy a new one?! Help Ava, Asaga, Chigara, Icari, and Sola succeed in the entertainment business with this supplemental DLC pack. Add your favorite Sunrider girl to your idol roster. Pick them as the center of your unit to utilize brand new bonuses. Power up your talent office by unleashing their ultimate techniques. None of this makes a lot of sense, but you asked for it, so here it is!

AVA CRESCENTIA
The commander of the former Sunrider. She is a strict and professional executive officer, but nobody knew that her secret hobby was karaoke! She is pretty annoyed that you insisted on making her into an idol, but she's got impressive singing skills from all her solo karaoke excursions. Don't screw up the paperwork, or else she'll definitely give you a long lecture.
In a pinch, Ava can restore order when the fans are angry, instantly defusing the probability of a FAN QUAKE. Not only that, but she can keep discipline amongst the other girls, as well as oversee dance practices to prevent injuries. She has rock solid singing abilities, which makes up for her cold personality.

ASAGA DI RYUVIA
The hero of justice now seeks to become the hero of the idol world! Asaga always wanted to become a star! She'll work hard to inspire hope in the masses. With an energetic and straight forward personality, she inspires the following of a legion of supporters. Not only that, but her plugsuit cosplay is a big hit with the hardcore fans.
Asaga can substantially increase the performance of EVENT rooms, giving you a late game boost. Overall, she has impressive stats with no clear weaknesses.

Chigara Ashada
Chigara's always been nothing but a helpful idol for a while now, but for some reason, the fans seem strangely apprehensive about her all of a sudden. Could it be that a mirror version of herself did something bad in some other universe that she's not aware of?! Lately, her popularity seems to be struggling! Despite public perceptions, Chigara will do her best to become a star! She is a gentle and smiling girl whose dream is to open a bakery. There's really nothing hidden about her this time, we swear!
Chigara struggles to increase her popularity, but starts with impressive stats. Use her ultimate technique and she will transform the cafeteria into a bakery! Not only that, but she can use her technical expertise to help fabricate merchandise and stage effects.

Icari Isidolde
The deadliest mercenary of the Neutral Rim is now an idol! It just goes to show that if you pay her the credits, she's willing to take on any job, no matter the risk. While playing the role of a committed idol, Icari also keeps on the lookout for any threats, making her an invaluable part of your security team. Just remember: She's only in this for the credits. It's not like she's pretending to be an idol because she likes you or anything!
Hiring Icari lets you buff up your security department, and she can even take out stalkers in emergency situations herself if you activate her ultimate technique. However, Icari isn't exactly the fans' spitting image of an idol, making her a competent but not standout idol.