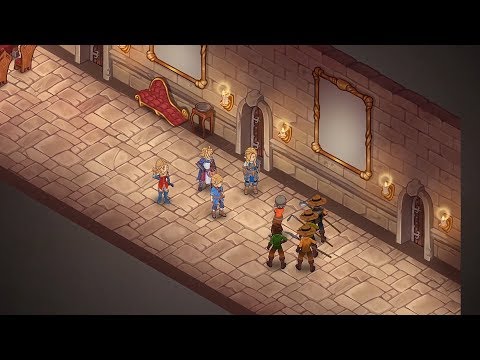 “Regalia: Of Men And Monarchs” is an RPG full of challenging combat and exciting adventures. Create your party of distinct individuals and get to work! There's a lot to be done if you are to rebuild your kingdom.

Enjoy the beautiful hand-drawn graphics, lose yourself in the original orchestral soundtrack composed by Game Audio Factory (of Furi and the Endless series fame), and go adventuring in the untamed regions of the land of Ascalia!

Your story begins in somewhat unexpected circumstances. Who would have thought that after your father passed away you would inherit… a wondrous kingdom far, far away? Unfortunately as soon as you arrive in Ascalia you find out the kingdom is drowning in terrible debt. Now, through some good old fashioned adventuring, you have to return your family seat to its former glory, help out your new subjects, and repay the kingdom’s massive debt!

“Regalia: Of Men And Monarchs” is a cool tactical RPG and a Kickstarter success. It was funded by gamers who, just like us, believe that we need to have more good tactical role-playing games. In the end, it was made to be everything we ourselves want from an honest RPG game.

So, will you defeat all the rats, bandits, monsters, and debt collectors? Or will your ruined kingdom fall into an even worse ruin? If you won’t succeed it will be the world’s first ruined ruin. And that’s just the worst.