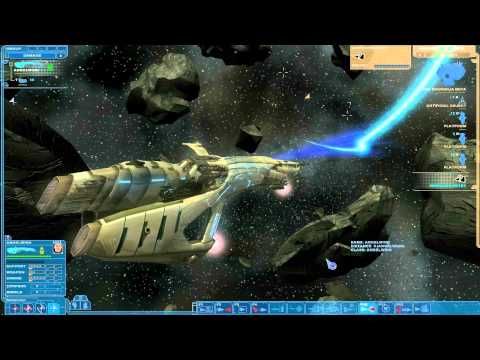 On the very edge of the solar system the companies make a discovery which will shift the technological advantage and upset the balance. And so a new conflict is born: "The Jupiter Incident". You are Marcus Cromwell, a young but already famous captain. With your legendary spaceship Stiletto you find yourself in the middle of the conflict.

Nexus: The Jupiter Incident is one of the few examples of a TFS: a Tactical Fleet Simulator. The strong, elaborate story takes you from mission to mission and allows different approaches. It’s up to you which tactics you choose to bring each mission to a successful conclusion, although you can lose a battle and still go on to keep fighting in the war. A reward system enables you to repair, upgrade and enhance your ships depending on the approach you chose. Mission briefings let you roam through an unbelievably accurate 3D animated star map system.

Are you up to the challenge of saving a galaxy?

Multiplayer notice: The game's multiplayer servers have been taken offline and the only multiplayer option available is LAN.

Multiplayer notice: The game's multiplayer servers have been taken offline and the only multiplayer option available is LAN.