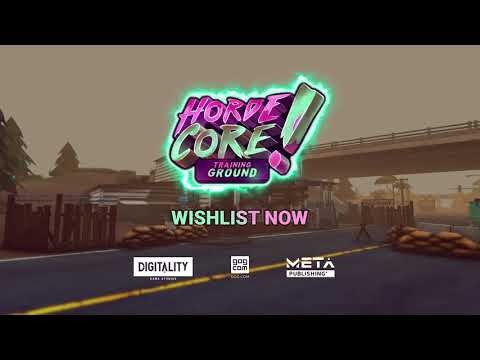 Why buy on GOG.COM?
DRM FREE. No activation or online connection required to play.
Safety and satisfaction. Stellar support 24/7 and full refunds up to 30 days.
HordeCore: Training Ground
Description
HordeCore is Coming Soon! You can wishlist it here. This is a prologue version of the game HordeCore. It includes several levels and characters that will be presented at the final game. HordeCore is a kick-ass action side-scroller set in a post-apocalyptic world. Become the leader of an ever-exp...
User reviews
Awaiting more ratings
{{ review.content.title }}
Product details
2020, Digitality Studios, ...
System requirements
Windows 7 SP1+, 4 GB RAM, NVIDIA GeForce GTX 960, Version 10, 4 GB available space...
Description

HordeCore is Coming Soon!
You can wishlist it here.
This is a prologue version of the game HordeCore. It includes several levels and characters that will be presented at the final game.

HordeCore is a kick-ass action side-scroller set in a post-apocalyptic world. Become the leader of an ever-expanding group of survivors. Manage supplies, upgrade your team, and craft deadly contraptions to defend yourself! Remember, exploration is vital in this harsh new world. Prepare to forge bizarre alliances and, together, face the many dangers of the wastelands. Take survival gameplay, combine it with base management, add RPG elements, and spice it up with a fully-fledged collectible card game - and you get HordeCore!


Collect unique survivors and strategically pick your team of apocalypse-hardened characters to fight through the outstanding number of living dead trying to get your brains for a snack. Keep your base camp safe and develop your defenses while growing a community of bad-asses that you can command into the constant fight for survival. Explore the wastelands in search of supplies. Face the unexpected dangers of the zombie-apocalyptic world of HordeCore!


Besides all the zombie-killing and loot-grabbing you can handle, HordeCore also includes a complete, fully-featured Collectible Card Game!

Horde Tactics is a deck building card game, featuring 60+ cards that you'll gather and unlock during your time in the Wasteland. Each card represents an item, character or a Hordeling that you encounter in the game—that way, your collection grows alongside your progress in HordeCore!