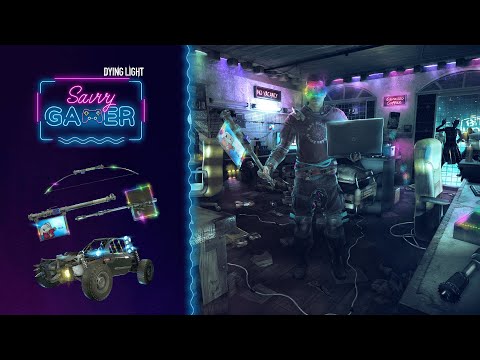 Why buy on GOG.COM?
DRM FREE. No activation or online connection required to play.
Safety and satisfaction. Stellar support 24/7 and full refunds up to 30 days.
Dying Light - Savvy Gamer Bundle
To play this game you also need
Dying Light: The Following – Enhanced Edition
In library In cart Soon Wishlisted
In library In cart Soon Wishlisted
Movie
0 Free
Play for free Coming soon
Description
Show off your gaming gear and mad skillz to send zombies back to noob hell! Find out how to turn a tablet, LED lights and a few cables into awesome combat gear with this new Savvy Gamer bundle! No one wants to get their screen scratched, but some situations require sacrifices. Like the zombie-apoc...
User reviews
Awaiting more ratings
{{ review.content.title }}
Product details
2021, Techland, ...
Description

Show off your gaming gear and mad skillz to send zombies back to noob hell!

Find out how to turn a tablet, LED lights and a few cables into awesome combat gear with this new Savvy Gamer bundle!

No one wants to get their screen scratched, but some situations require sacrifices. Like the zombie-apocalypse situation. It’s either this new, shiny tablet or you. And in Harran, you must always choose you. Fortunately, you’ve got just enough of too long, tangled cables that have been waiting all those years to finally come in useful and colourful LED lights (because we all know everything’s better backlit) to turn your hardware into deadly and stylish weapons. Well, more than that. Gaming weapons! That instantly makes them better, right?

Now, it’s time to show the infected your new gear! Chain at least three hits with the new one-handed axe—RGB AXE-Pad—to apply shock damage! Or, if you’d rather use something heavier, smash them with the Next-Gen Maul hammer. Use a charged attack to let its power flow through the circuit and shock your enemies. But sometimes it’s better not to come too close, and for that, you’ve got the LED Meta Bow. It glows, it shoots, and, most importantly, it keeps you away from the bloodthirsty monsters! But let’s not forget about the pinnacle of your crafting skills! Some extra lights here and there, just a little bit of polishing, and your buggy has turned into this cool 4wheelz ride! So, jump right into it, put on your 1337 G4m3R VR headset (Careful! It might affect your vision!) and let’s get out of this mess!

DYING LIGHT & DYING LIGHT: THE FOLLOWING © Techland 2021. Published by Techland. All other trademarks and copyrights are the property of their respective owners.