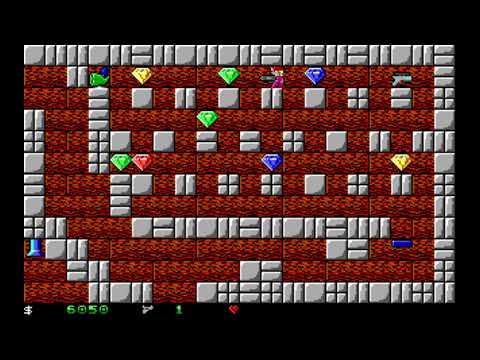 Crystal Caves is a colorful game with arcade-style gameplay, puzzles and graphics. As Mylo Steamwitz, you'll enter cave after cave of adventure, gathering the treasures of each, while evading hazards galore!

The game begins with Mylo rocketing to the Altairian star system on a simple treasure hunt. But what happens is far more dangerous than even Mylo bargained for. He enters an underground world of chambers full of alien technology and traps. Strange alien creatures and robots inhabit the caves, protecting the priceless crystals from money-greedy explorers.

On some levels Mylo will even walk up-side-down! Other levels have such low gravity that the recoil from Mylo's laser pistol can knock him into other dangers! Some levels are without lights, and others are packed full of falling hammers egg-dropping alien bats, free roaming slither eyes, web-shooting alien spiders, and much, much more.

Can you help Mylo strike it rich and quit his day job?