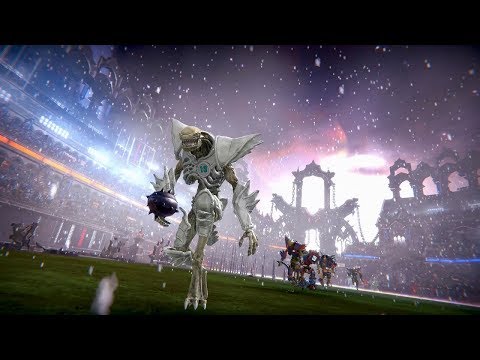 OpenCritic Rating
Game Revolutionby Tyler Treese
4/5 stars
Much like its 1993 predecessor Mutant League Football, the game is a very clear variation upon the established Madden formula. The main differences come in the form of how Mutant Football League embraces the core violence of contact sports.
Read full review »
Gaming Nexusby Russell Archey
8/10
Mutant Football League isn't your ordinary game of football.  Player deaths, field hazards, and dirty tricks make this a unique game from others that take place on the gridiron.  If you're not a fan of the Dirty Tricks mechanic or are okay with your team being preset instead of drated, then you might not enjoy Dynasty Mode as much, but with Exhibition, Season, and Playoff modes playable without them or several other options, Mutant Football League is still an entertaining game on its own.
Read full review »
DualShockersby Travis Verbil
7/10
With this garden variety of irreverent zaniness under its belt, Mutant Football League offers a tantalizing alternative for football fans that are tired of Madden or fans of arcade titles looking for some quick action. Mutant Football League sticks an irreverent spike into football's vanilla veins; it gives the sport's tired metagame a much desired shot in the arm. While I doubt those that are genuinely uninterested in football will enjoy Mutant Football League, players with a passing interest in the sport will most certainly find something to enjoy.
Read full review »
Reviews powered by OpenCritic
You may like these products
In library In cart Soon Wishlisted
In library In cart Soon Wishlisted
Movie
Free
Play for free Coming soon
User reviews