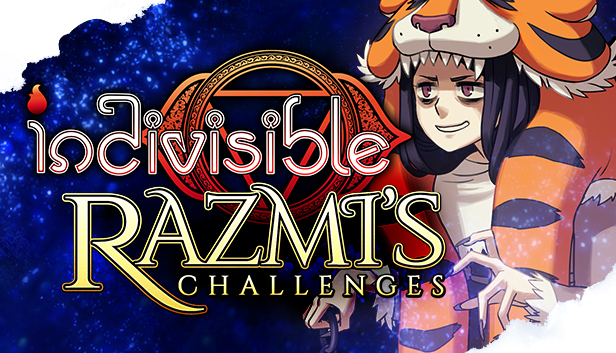 Razmi’s Challenges is a paid DLC pack that adds bite-size challenge levels to the game, emphasizing mechanics that are used across the main game, including more advanced combinations of maneuvers.
It’s hosted by everyone’s favorite curmudgeon Razmi with plenty of comic dialogue between her and Ajna.

Razmi has decided to annoy Ajna by challenging her to do something impossible, promising a “reward.” Ajna accepts the first challenge and after the player succeeds at it, Razmi claims it was part of 40 things you have to do, but Ajna remains optimistic and is willing to go through all of them. Razmi is discouraged by Ajna's continued success but is determined to make Ajna look foolish, so keeps coming up with new absurd challenges. As the player continues, other fan-favorite characters tell Razmi that it is getting to be too much, which Razmi stubbornly ignores.

As we reach the conclusion, Razmi starts to feel bad about it because Ajna is having a tough time but she's in too deep to tell Ajna it was all a ruse. When the player finishes all the challenges, Razmi will actually go to the bother of rustling up a present, but Ajna will reveal she figured it out a while ago, isn't that dumb and knows there's no reward, but it was fun training together. Razmi says she’ll keep the reward to herself. Ajna insists on receiving whatever it is.

©505 Games 2016. Developed by LabZero. Published by 505 Games. 505 Games, Indivisible and the 505 Games and Indivisible logos are trademarks and/or registered trademarks of 505 Games S.p.A. and/or its Affiliates. All other marks and trademarks are the property of their respective owners. All rights reserved.