A Kiss For The Petals - Maidens of Michael 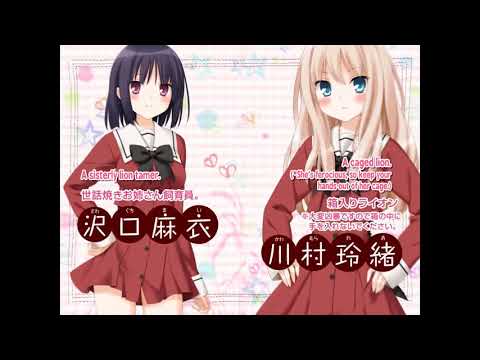 Azumi Risa, class representative of the Year 1 "Snow" class, was once again fighting with the class troublemaker, Ayase Miya today. The no-nonsense, assertive Risa, and the antisocial Miya couldn't be more incompatible, with their arguments frequently bordering on shouting matches. At the time, the whole school was in high spirits in anticipation of Christmas. Amidst the flirtations of couples, established and spontaneous ones alike, excitement was brewing over the informal student poll to decide "St. Michael's Best Couples." Not having a girlfriend, Risa didn't think the matter concerned her... Until she and Miya were chosen as a pair!

Naturally, Risa denied having any sort of romantic relationship, but the classmates who endorsed them simply smiled gently with the reasoning of refined girls brought up in respectable families, saying, "You always appear to be having such fun." Although the two agree to go along with it for appearance's sake, it turns out they'll also be stuck on an committee with four other couples, planning events for the upcoming holidays of Christmas and Valentine's Day.

What's more... those four other couples are:

Matsubara Yuuna, chairman of the Campus Improvement Committee, which effectively serves as the student council, and her junior, Oda Nanami.

The singing sensation of the school's culture festival, Kawamura Reo, and her girlfriend, Sawaguchi Mai.

And finally, the transfer student with her own "Lily Platinum" fan club, Shitogi Eris, and the school's highly regarded foremost scribe, Kirishima Shizuku...


Nothing but the most prominent couples on campus.

Will they be able to make it through the upcoming events in the company of these prominent couples? And will Risa be able to survive spending the lovers' holidays of Christmas and Valentine's Day with Miya?