Change language to: DE edition | FR edition | RU edition | PL edition | CN editionCheck our First Steps game guide for Cyberpunk 2077 before reading this article.It's been a few days since the launch of Cyberpunk 2077, and by now you've probably gunned down half the city, hung out with Johnny Silverhand, and picked up a new ride or two so you can cruise around Night City in style. 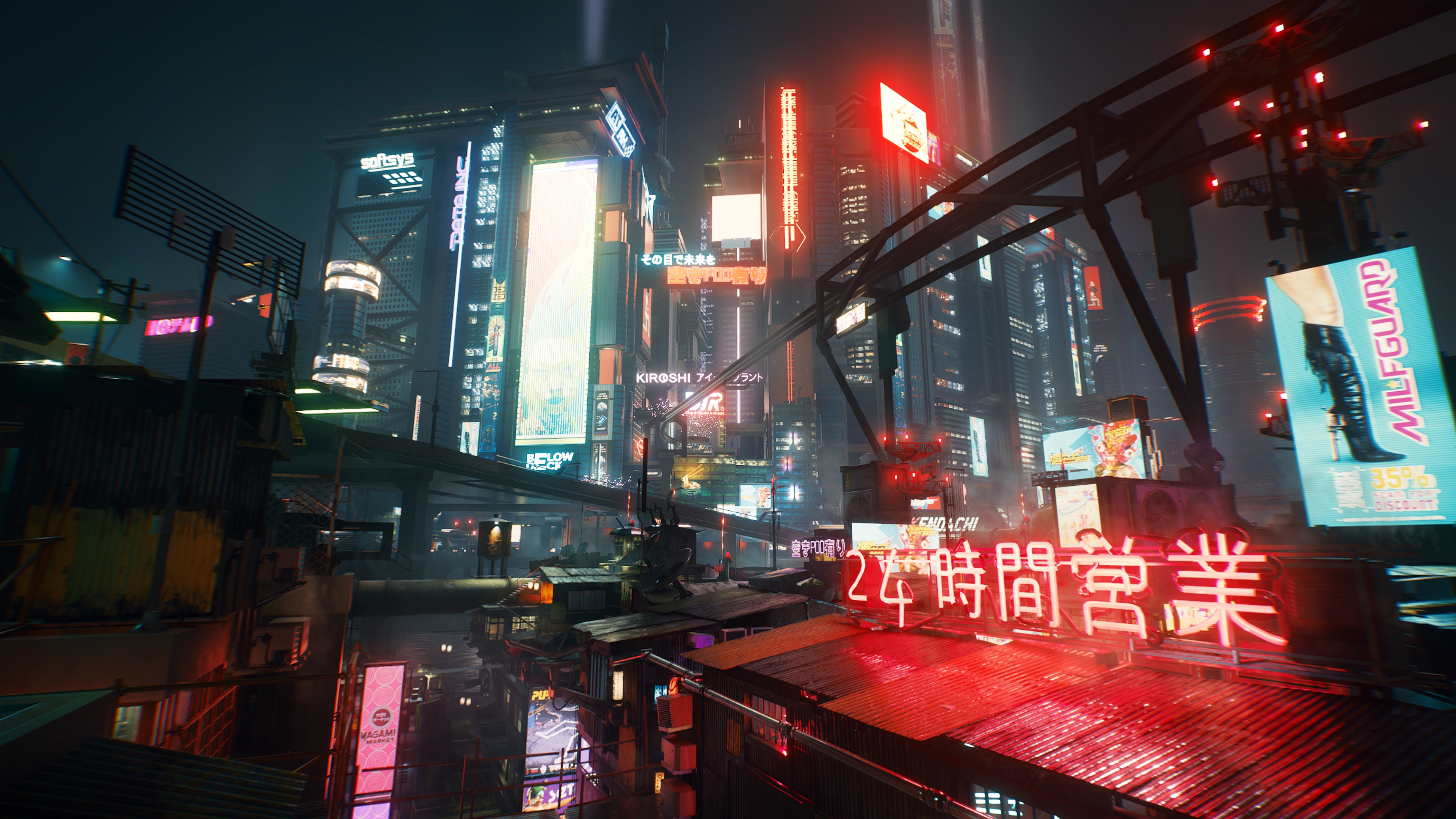 And while you may think you've got it all figured out, there might be some parts of this vast RPG that you've missed, either by choice or from being too wrapped up in everything else going on. But worry not, because we're going to dig into some of the aspects of Cyberpunk 2077 that you should remember, even as you step ever closer to becoming a living legend.

Make your guns work for you

Gunfights are always a dangerous thing – no matter how big and tough you are, you're always just one stray bullet away from flatlining. But in Cyberpunk 2077, you don't have to keep poking your head out of cover to shoot at your enemies.Guns in Night City come in three flavors – Power, Tech, and Smart. Power is the most common, and you've probably been using a few of them already. But don't forget that they're useful for more than just pointing and shooting. Their bullets can also ricochet off walls and floors, which can come in handy when some gonk won't get out of cover. 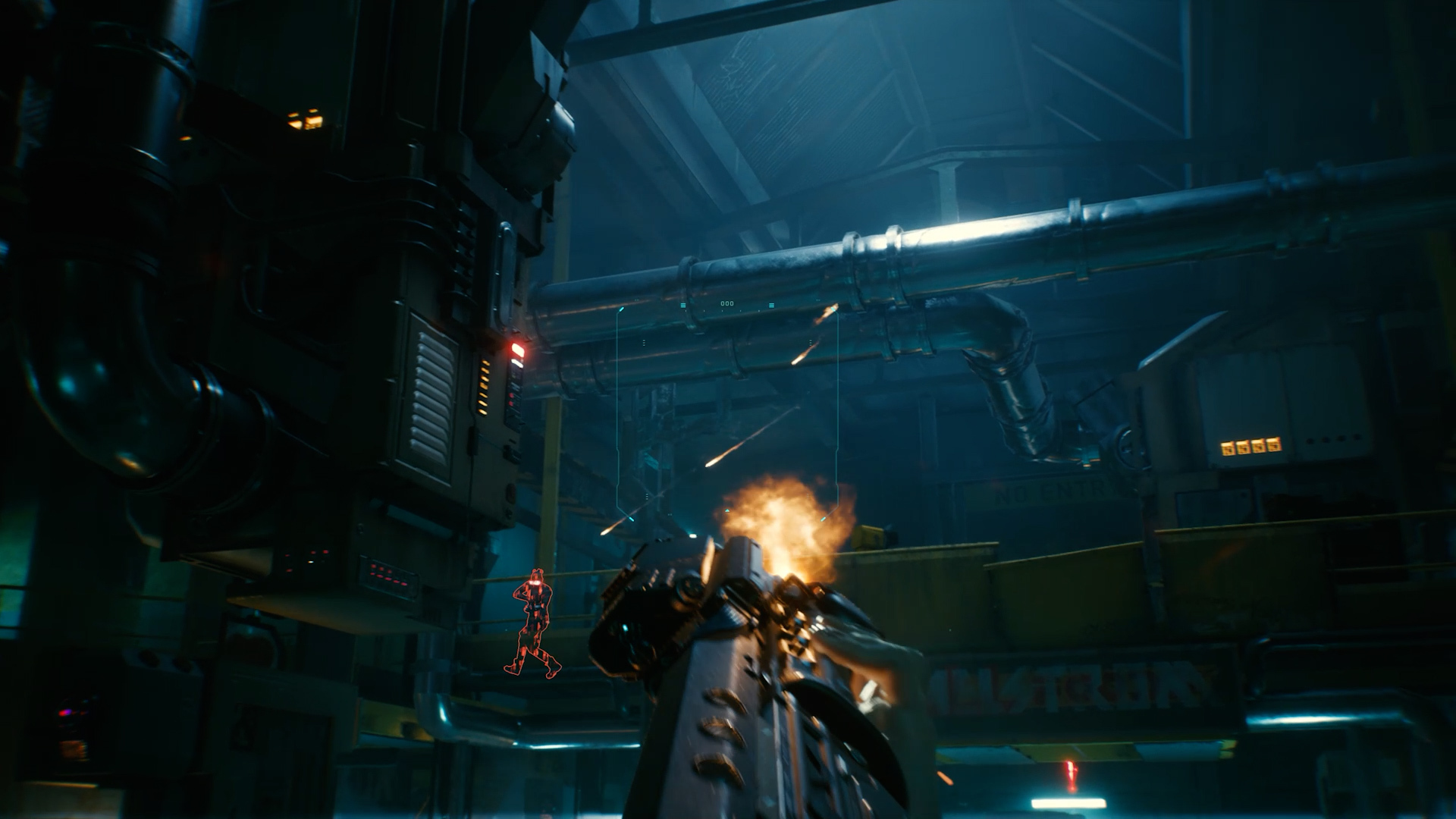 Tech guns can also deal with the cover situation by simply blasting through it. You can charge up a Tech weapon by holding your chosen "fire" button down for a second or two, and once charged, it'll shoot automatically and punch through whatever's in your way.Smart weapons are even handier, automatically locking on to enemies so you barely even have to aim. You do need the right cyberware to make them work, however – if you haven't already, make sure you've finished the Side Job called The Gig for a free upgrade that will unlock these bad boys.

Speaking of which, make sure to check in with a nearby ripperdoc every now and then. Cyberware is easy to forget about since you need to speak to specific people to get it installed, but it's worth making the trip for some serious boosts to your stats. 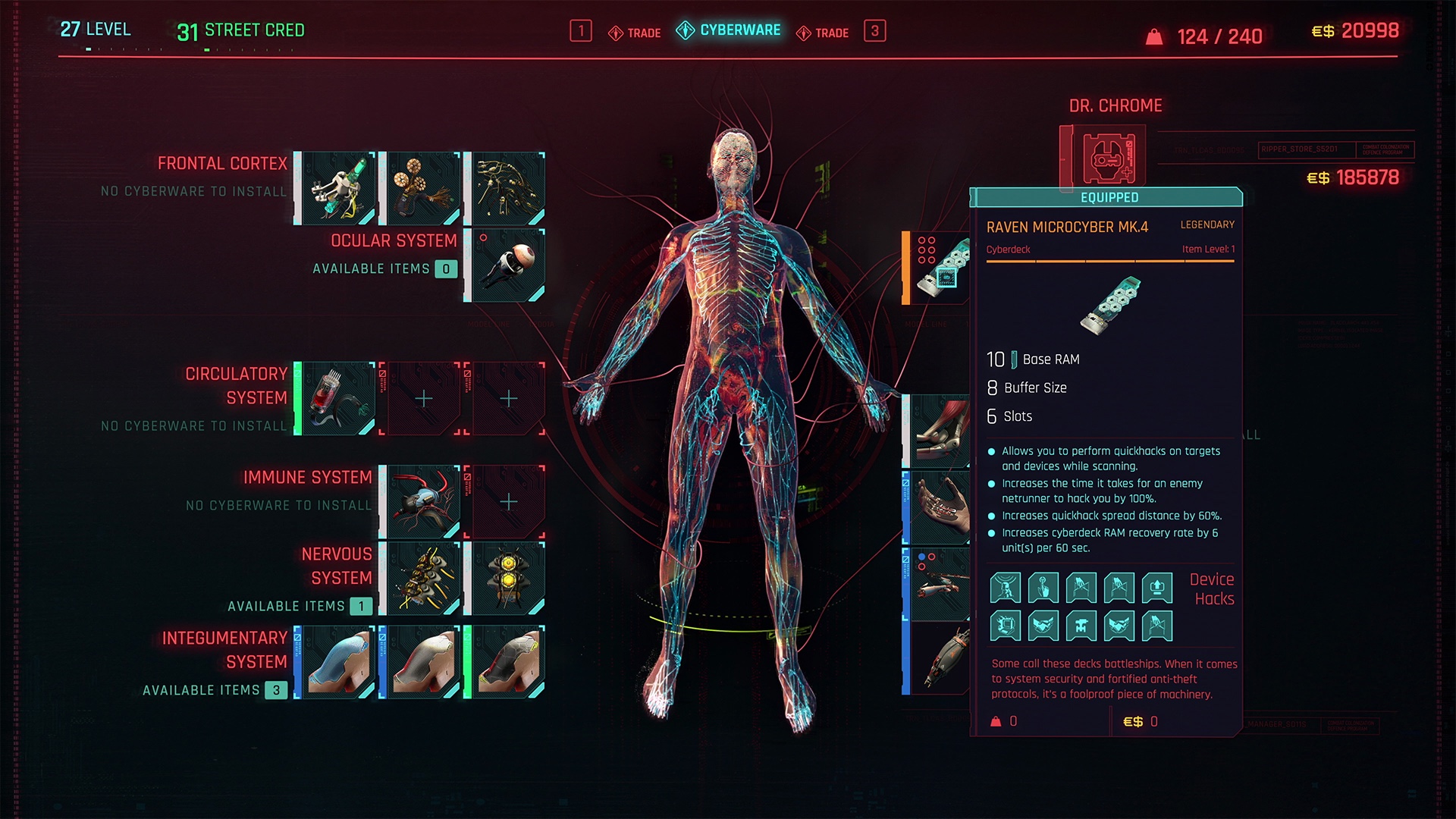 Just be aware that if you want to access some of the incredibly useful implants, like being able to double-jump, you'll need a lot of Street Cred and stacks of eddies. You can score both of these by dealing with all the Side Jobs you've got piling up in your Journal. Get to it!

Even if your preferred playstyle involves running into a room and gunning everyone down, it helps to spend a bit of time scanning the area and learning more about what you're up against before you charge in.The first thing you'll want to do is run the Breach Protocol on a hackable target in any new location you enter. This lets you run quickhacks at a lower RAM cost, giving you more room to play around before you rush in.

The main thing to remember is that while Breach Protocol has a timer, it doesn't start until you make your first move. Plan your route to each node before you begin, and you'll finish the hack with plenty of time to spare.Once you're in, run a Ping quickhack on an enemy. This will highlight everyone else connected to the same network, revealing their location to you. Now you can tag each hostile if they're close enough, and ensure you know exactly where they are so nobody will catch you by surprise when the bullets start flying.

You can buy just about anything you need in Night City, but when money's tight, or you're just feeling thrifty, it can be far more effective to craft and upgrade your own gear.Crafting requires a blueprint and some materials, but they're not that hard to find. Blueprints can be bought or found lying around, and you'll even get some if you invest in certain Perks in the Crafting skill tree. Materials can be looted from around the world, salvaged any time you scrap a weapon or bought from Junk Shops if you're really stuck for parts. 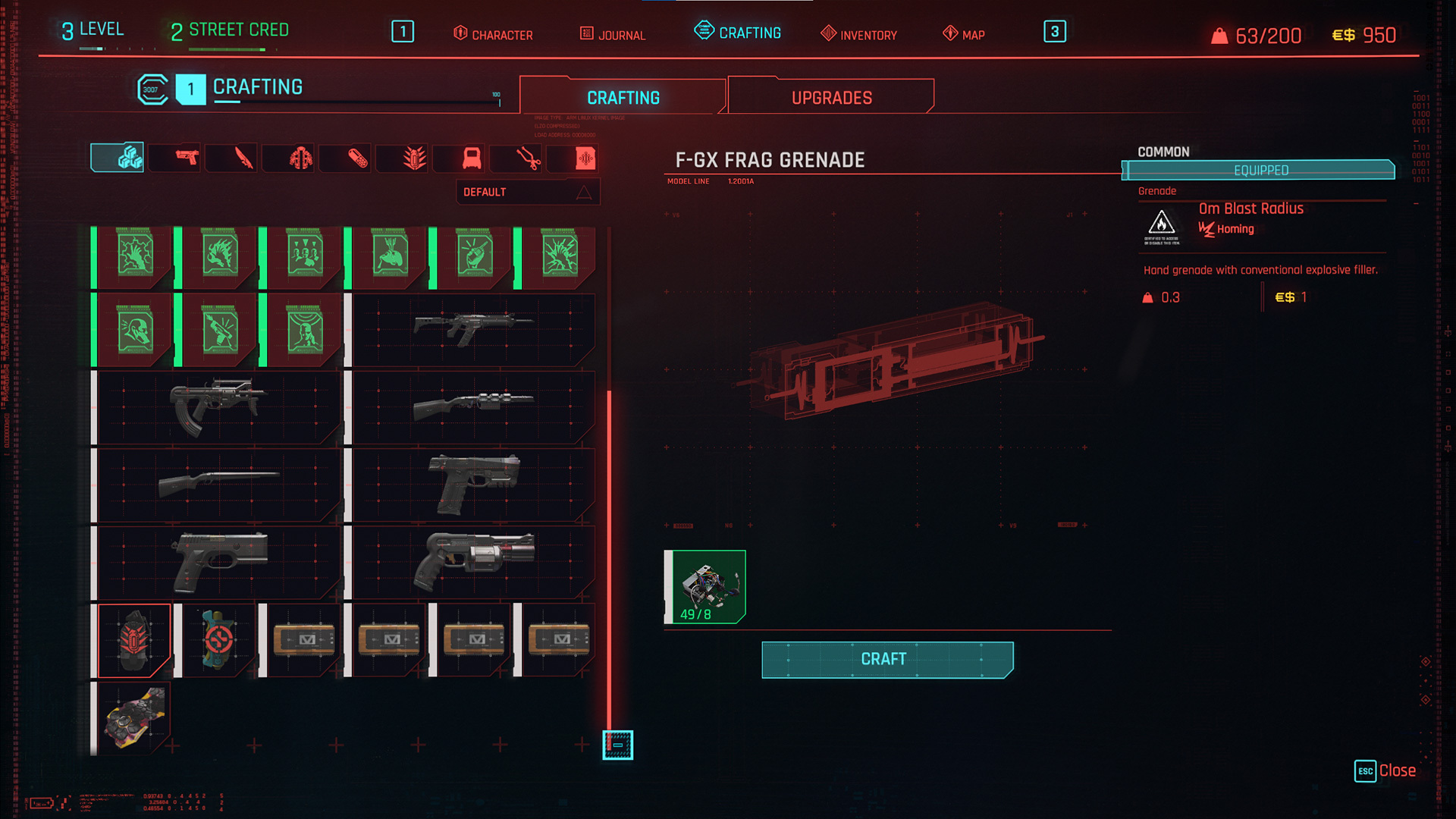 Your crafts and upgrades improve as you level up your Crafting skill, so it pays to craft some smaller items first in order to boost your Crafting experience. Try gathering a lot of Common Item Components and crafting as many F-GX Frag Grenades as you can to bump your level up a bit before you go for that big upgrade – it'll be worth it.

Let your fists do the talking

There are all manner of weapons to swing and shoot as you take down the assorted scum of Night City, but sometimes keeping key targets alive leads to better rewards and a slightly easier life. And when you can't get your hands on a non-lethal weapon mod, it's time to put your mitts up.Fist-fighting in Cyberpunk 2077 is an effective way to take down a gonk with a gun, as they barely have time to aim before you've thrown your next punch – though you do need to avoid their fire while you get close enough to hit them, and keep an eye on your stamina bar so you don't end up exhausted and wide open for attack.But if someone comes out swinging against you, you need to remember how to counterpunch. Watch their attack, and just as it's about to land, enter your blocking stance. You'll completely block the hit, deal damage with your own punch, and give yourself a huge window to counterattack, making the whole fight a lot easier. 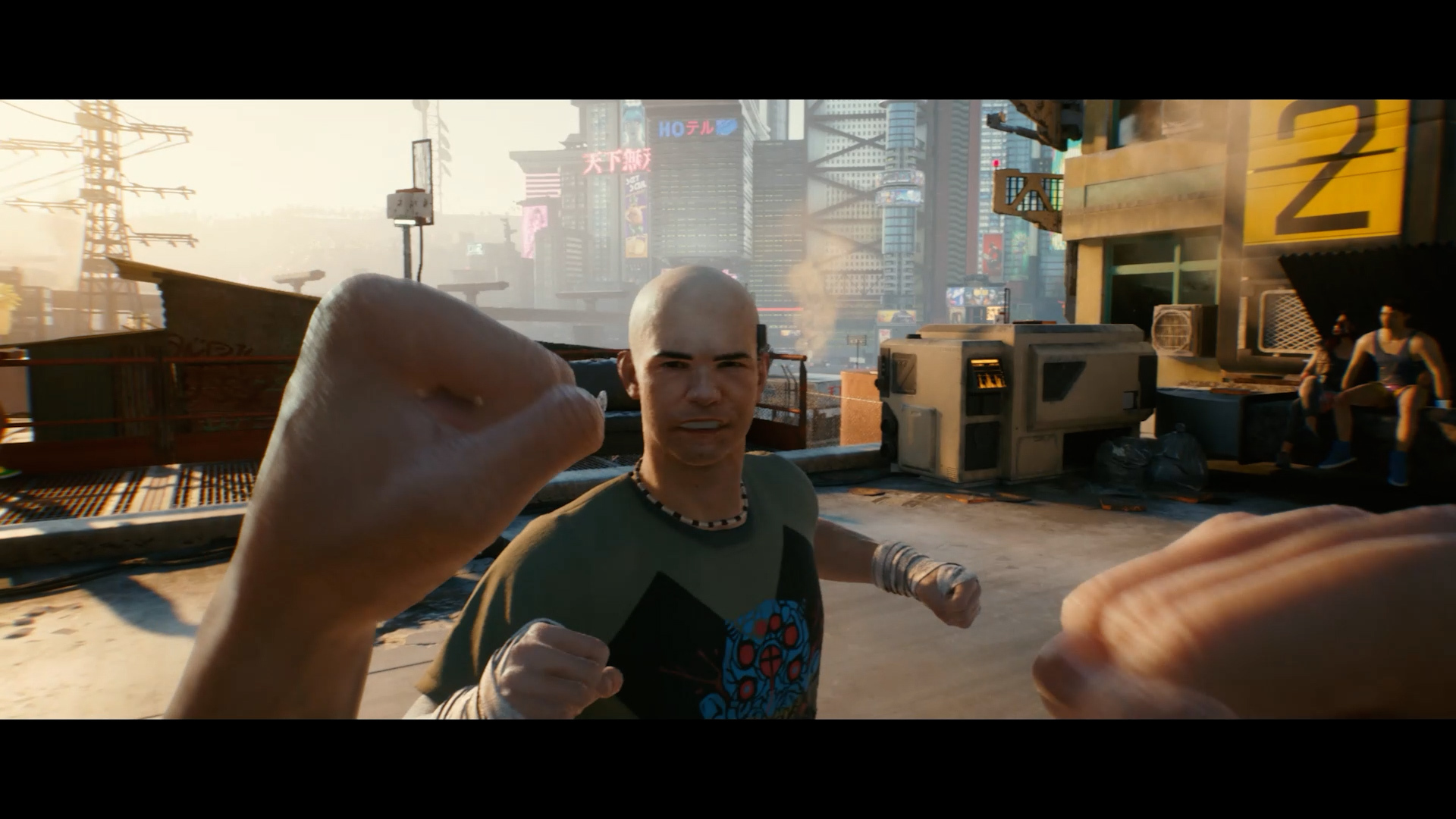 There's so much to see and do in Cyberpunk 2077 that we couldn't possibly list it all here, but we hope these tips will give you some inspiration on how to tackle the next big obstacle facing you in Night City. Go get 'em, samurai!
See comments (33)