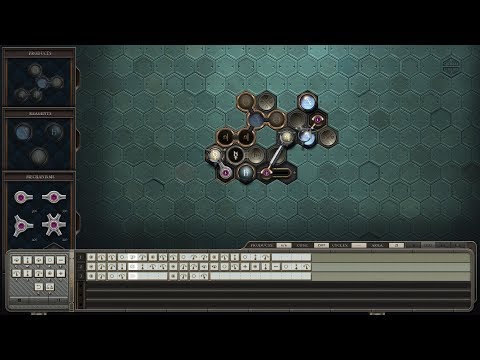 Hailed as the most promising alchemist of his generation, Anataeus Vaya has just accepted a position as Head Alchemist of House Van Tassen, the oldest and richest of the city’s ancient Houses. But dangers lurk behind the family’s opulent facade, and alchemy alone may not solve every problem.

Opus Magnum is the latest open-ended puzzle game from Zachtronics, the creators of SpaceChem, Infinifactory, TIS-100, and SHENZHEN I/O. Master the intricate, physical machinery of the transmutation engine— the alchemical engineer’s most advanced tool— and use it to create vital remedies, precious gemstones, deadly weapons, and more.

Design Machines - Design and build machines that carry out alchemical processes using a variety of components including programmable arms, customizable tracks, and more esoteric devices like Van Berlo’s wheel and the Glyph of Animismus.

Open-Ended Puzzles - Compete against your friends and the world to build the simplest, fastest, and most compact solutions to the game’s challenges. Export animated GIFs of your elegant designs to show them off.

Rich Story - Intrigues and dark plots swirl around the city’s ancient Houses. Alchemists, who hold the power to create almost anything known to science, are highly sought— and highly dangerous.