Beyond a Steel Sky 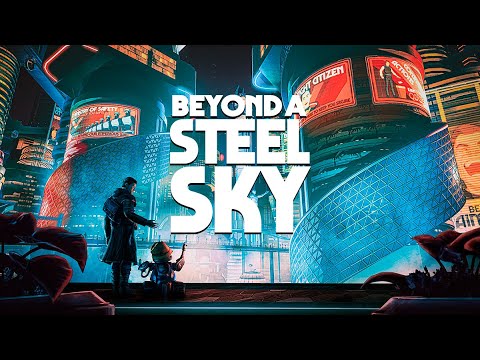 Why buy on GOG.COM?
DRM FREE. No activation or online connection required to play.
Safety and satisfaction. Stellar support 24/7 and full refunds up to 30 days.
Beyond a Steel Sky
Description
From Charles Cecil, creator of the Broken Sword series, with art direction by Dave Gibbons, legendary comic book artist behind ‘Watchmen’, comes ‘Beyond A Steel Sky’, the long awaited sequel to the cult classic ‘Beneath a Steel Sky’. You are Robert Foster. A child has been abducted in a brutal...
Critics reviews
56 %
Recommend
PC Gamer
81/100
PC Invasion
7/10
God is a Geek
7/10
User reviews
4.1/5
{{ review.content.title }}
Product details
2020, Revolution Software, ...
System requirements
Windows 10 64-bit, Intel Core i3-2100 (3.1GHz) or AMD Phenom X4 945 (3.0GHz), 4 GB RAM, Nvidia GeFor...
DLCs
Beyond a Steel Sky Soundtrack
Description

From Charles Cecil, creator of the Broken Sword series, with art direction by Dave Gibbons, legendary comic book artist behind ‘Watchmen’, comes ‘Beyond A Steel Sky’, the long awaited sequel to the cult classic ‘Beneath a Steel Sky’.

You are Robert Foster. A child has been abducted in a brutal attack. You have vowed to bring him home. The trail has led you to Union City, one of the last remaining mega-cities in a world ravaged by shattering wars, and political meltdown.

Union City is a utopia, its people loving life under the control of an altruistic AI: ever-attentive androids, designer living, piazzas and bars. What’s not to love? But this City has a dark underbelly...

‘Beyond a Steel Sky’ is a dramatic, humorous, cyberpunk thriller in which engaging puzzles drive a fast-paced narrative set in a dynamic gameworld that responds to – and is subverted by – the player’s actions.

The World
An adventure set within a dynamic world, populated by wilful characters driven by motivations that the player can subvert. In combination with a unique hacking tool, multiple solutions to puzzles emerge from player choices.

The Puzzles
Intelligent puzzles are interwoven with an intriguing dramatic narrative to deliver a compelling gameplay experience.

Cleanliness Is Next To Joeyness
Clean everything up, ready for the party
common  ·  41.3%

Your Lessons Are Over
Complete all tutorials
common  ·  78.06%

OpenCritic Rating
PC Gamerby Ian Evenden
81/100
Filled with what made the original game great, this second trip to Union City has been worth the 26-year hiatus.
Read full review »
PC Invasion
7/10
Beyond a Steel Sky has some technical issues but it's excellent writing and interesting storytelling make it well worth experiencing.
Read full review »
God is a Geekby Mick Fraser
7/10
After 26 years, Beyond A Steel Sky is a strange yet welcome sequel. Not quite fresh enough to stand alone nor nostalgic enough to stir the memory, it nevertheless manages to thoroughly entertain if not thrill.
Read full review »
Reviews powered by OpenCritic
You may like these products
In library In cart Soon Wishlisted
In library In cart Soon Wishlisted
Movie
Free
Play for free Coming soon
User reviews