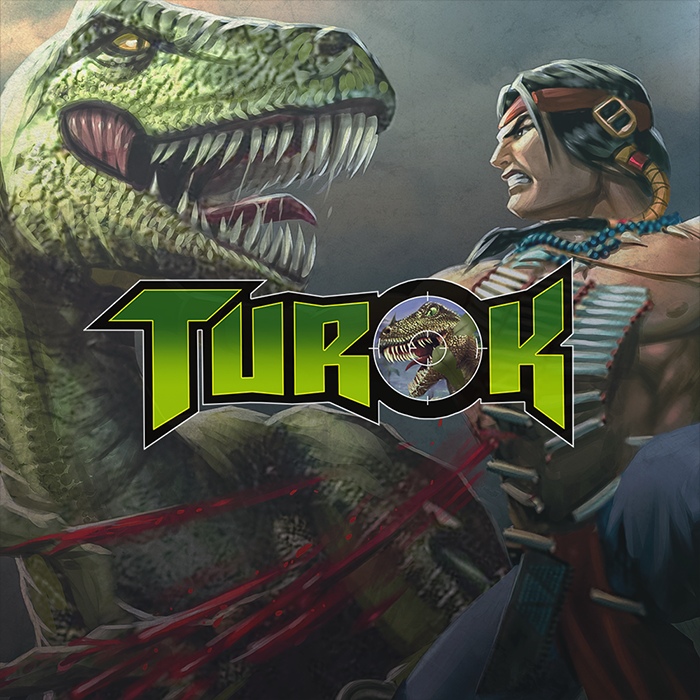 The 90s were an amazing time for video games. Many iconic series got their start during the generation of Nintendo 64s and PlayStations. One great example, and one that was released at the perfect time, is the all-time classic Turok.

Picture this. It’s the height of the 90s. Dinomania is at an all-time high thanks to the Jurassic Park movies, and out of nowhere comes a game where you live in a world infested by dinosaurs. Who wouldn’t love to get lost in that world for a little while?

The series got its start thanks to the huge hype surrounding the N64. Yet, it seemed like as the years passed, and with games like GoldenEye 007 hot on its heels, the game has been forgotten. This happened even despite multiple games, a comic book, and an animated feature.

So, let’s take a trip down memory lane of the awesome (and sometimes wacky) history of the Turok series.

What started it all

The first Turok game was released way back in 1997, and it was inspired by the Turok Dinosaur Hunter comic. You might have known about the comic inspiration, but did you know that the main protagonist’s first appearance in a comic took place all the way back in 1955?

The Turok, Son of Stone comics eventually lead to the first video game, Turok: Dinosaur Hunter. It was developed by Iguana Entertainment and published by Acclaim. If you have played it (and we assume you have if you’re joining us on this nostalgia trip!), you’ll remember the crispy FPS gameplay that blended fast-paced gunplay and exploration.

One of our favorite parts of the series is the combination of primitive worlds and sci-fi goodness. We’re all a bunch of geeks, so combining something like dinosaurs, time travel, and shotguns is really just perfect.

The jungle-themed levels were also made that much better by just how much freedom players had in levels. While they were somewhat linear, the ability to climb vine walls and dive into water-filled tunnels helped bring the world to life.

From the moment you hear “I am Turok!” and pick up the Tek Bow with explosive arrows, you know you’re in for a memorable experience. The game combined the fast-paced shooting of games like Doom while also giving Tomb Raider fans an outdoor area that just begged to be explored.

The second part of the series expanded on the game’s universe with players taking on the role of a new Turok, Joshua Fireseed. In addition to improved gameplay and graphics, Turok 2 also introduced multiplayer to the series. It wasn’t the most talked-about feature, yet at least players that loved the atmosphere of the game, had something to do after the final story credits rolled.

Turok and Turok 2: Seeds of Evil continue to hold up today and help demonstrate why the games are still such cult classics for gamers.

The 90s and early 2000s are known for their wild marketing stunts and antics. Remember the totally awesome “Got Milk?” campaign? Yep, that started in the 90s. Video games were not strangers to wacky campaigns either and helped Turok gain its cult status.

You had companies like Sega with their “Nintendon’t” commercials, and Acclaim, the studio responsible for Turok, was getting in on wacky marketing campaigns, as well.

After the success of a whopping four games on the N64, Acclaim was pumped for the release of the series’ newest game, Turok: Evolution. This title celebrated the game’s first time on the Xbox, PlayStation 2, and GameCube. To help commemorate the game’s launch, Acclaim has decided to release a viral (well, as viral as you could get in the early 2000s) marketing campaign.

The reward for the campaign would see five people getting £500, a free Xbox, and a copy of the new game. The catch? To earn the prize, UK residents would have to legally change their name to Turok. The campaign has received quite a media coverage, even on BBC.

Sadly, it seems it did truly end up being a marketing stunt, and no one actually changed their name. But it definitely helped spread the word for the game and contributed to its place in history as a cult classic.

The series was more than just video games

We quickly mentioned it, but the Turok series was more than just video games. Other mediums helped establish the world the game was set in. The first comic appearance occurred in 1954, and in 1956, Turok got his very own comic, Turok, Son of Stone.

That comic series, published by both Dell Comics and Gold Key Comics, spanned from 1956 all the way to 1982. Our hero was also featured in comics from popular comic publishers Valiant Comics, Dark Horse Comics, and Dynamite Comics.

Past just comics, Turok also made his way to the screen in the form of an animate feature also titled Turok: Son of Stone. Adam Beach voices the main character. The title follows the hunter in a world full of dinosaurs against a vicious leader of a rival tribe.

In total, there have been six main Turok games that have spanned from 1997 to today. But that’s not all the series has provided gamers. In addition to those games, there have been dual releases on handheld systems, and in 2019 the series took a drastic turn. And when we say drastic, we mean drastic.

Turok: Escape From Lost Valley was a completely different take on the series. It plopped our hero into a third-person isometric game. It’s quite different, but if you have been itching for even more Turok, it might help scratch that itch.

And finally, if you prefer your classic video games a little more polished for today’s standards, we have good news. Both Turok and Turok 2: Seeds of Evil have been remastered and are available to play today.

Will we ever see another Turok game grace our screens? Time will tell, but the series has established itself in the world of action-packed shooters.

If you’re into FPS titles, check also our articles about the Quake games and Bioshock series.