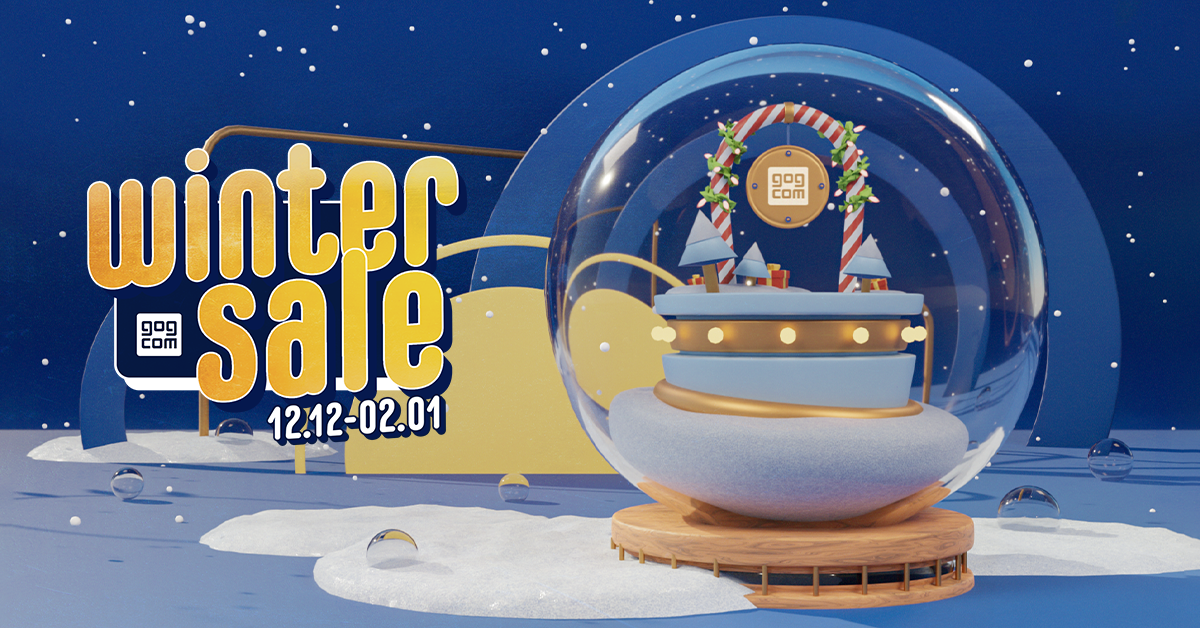 Every end of the year is full of different lists, recaps, roundups, and reports, which sum up every major thing that have happened during the year and, more often than not, comparing them and highlighting which ones can be described as THE BEST.

And it’s the same for us, and games released on GOG in 2022. We’ve asked our team which titles are their favorite, gather their thoughts, and now we are ready to present you with the gaming masterpieces that can be called GOG’s team picks for the best game releases of 2022.

Keep in mind that the following titles are just the tip of the iceberg. With so many amazing releases this year, we’ve gathered more than 50 of our favorites in a special GOG GOTY Collection. And to make it even better, during our Winter Sale, all of them are discounted even up to -85%. But without further ado, let’s jump right into it!

It’s no surprise that this amazing adventure, point & click title made it on the list. The unexpected, thrilling return of series creator Ron Gilbert that continues the story of the legendary adventure games The Secret of Monkey Island and Monkey Island 2: LeChuck’s Revenge, has completely taken control of some of our colleagues’ free time. Here’s what Tech Support Specialist known as Judas had to say about it:

The Monkey Island is a series beloved by adventure fans everywhere, and since I am a fan of Ron Gilbert’s humor, I naturally had to go with Return to Monkey Island. The humor in the game is sharp and witty. The puzzles have just the right amount of difficulty, so that you are challenged by the game without having to resort to “adventure game logic”, where you’re trying to combine a rubber chicken with a cannonball, so to speak, just to progress further.

We bet you have no idea what this title is! But jokes aside, Bethesda’s absolutely legendary 5th entry in The Elder Scrolls series, still remains of the greatest RPG of all time and makes us sink countless hours into discovering its amazing world. Moreover, with its Anniversary Edition things got even better. It gave us a decade worth of content with the core game, all add-ons of Skyrim Special Edition, and entire pre-existing and new content from Creation Club including quests, dungeons, bosses, weapons, spells, and more. And it seems that Krzysztof, our Legal Counsel, completely fell in love with it:

The legend itself. An essential open-world experience in the snowy mountains of Skyrim, where the prophecies of old have foretold my arrival, Dragonborn. I can be a powerful warrior, a wise mage or a stealthy rogue, or anyone I like. Battling across the lands or underground, exploring, meeting new friends and becoming a hero. It’s the ultimate immersion in the great adventure or straying from the path and forgetting your own destiny that made me pick Skyrim. If you have not tried it, you owe it to yourself to play it at least once. I know what I’m talking about, as I used to be an adventurer like you, then I took an arrow in the knee.

Heavily anticipated sequel to the critically-acclaimed 2019’s A Plague Tale: Innocence. This survival action-adventure and stealth title with puzzle-solving elements follows the fate of siblings Amicia and Hugo de Rune, who are looking for a cure to Hugo’s supernatural blood disease, all while running from soldiers of the English Inquisition and hordes of infected rats that are devouring the world with the plague. And why we could endlessly speak about what makes it one of our picks, Mariusz, our Product Specialist of Game Releases, did it masterfully:

You already know that Requiem is a brilliant and acclaimed sequel, truly defining the action-adventure genre. But besides being a clever, challenging game, where you wade through the swarms of rats, piles of corpses and other unspeakable horrors of pest-ridden France (and occasionally breathtakingly beautiful, serene landscapes with mysterious temples hidden underneath), it turns out to be a haunting experience, one that will make you sit silently until the very end of the credits, listening to the gloom masterpiece soundtrack by Olivier Deriviere. And after that experience is over, you’ll be left with what only a handful of games can offer – a beautiful memory.

While currently being in development, it didn’t stop this excellent turn-based strategy game from enchanting us with its unique art style, great gameplay inspired by 90s classics, and amazing approach of allowing us to lead powerful magicians, build an empire, wagewars and so much more! Our Full Stack Developer Maciej from BackOps Team did a great job of summing up why we like it so much:

If you’ve ever found yourself reinstalling Heroes of Might and Magic 3 when someone mentioned it, this is a game for you. It is a breath of fresh air which brings plenty of improvements to the well established formula. It features deeply tactical combat with a great selection of unique units and powerful spells. All bathed in a gorgeous, rich, atmospheric pixel-art that is a true joy to look at. A game with which you will spend many wonderful evenings playing for just one more turn…

Of course Paradox Interactive’s masterpiece is here! The fourth installment of the award-winning Europa Universalis series is arguably the best one, while already acquired the title of the cult-classic and having gargantuan following within the grand historical strategy scene of gaming. But when a game gives you the ability to control a nation through four dramatic centuries, while ruling your land and dominating the world with unparalleled freedom, depth and historical accuracy – what else could we expect? Out QA Tester at Game Releases Team, Tomek, has pretty much perfect description for it:

I don’t think Europa Universalis IV needs much introduction. It is THE historical grand strategy game covering the period roughly between the fall of Byzantium and the French Revolution. It’s got everything – diplomacy, espionage, warfare, complex trade system, the whole nine yards. On top of that, the players can hop in behind the wheel of every country on the map. Want to become the pope and Deus Vult your way across Europe? You can do that. Sengoku Jidai is more your speed? Very honorable, Europa Universalis IV has you covered. Do you have a thing for the winged hussars and need another excuse to blast Sabbaton at full volume? Yeah, you can do that too. Wealth of options, endless replayability and it’s all in one package (with dozens upon dozens of addons).

An indie gem coming right at you! Hero’s Hour is an accessible, yet-deep and content-rich strategy role-playing game. This awesome, fun-filled title took us by surprise and managed to conquer our hearts. Because what’s not to love about taking control of your hero, exploring the world, building up your town, fighting fast-paced battles, leveling up your hero and amassing an army large enough to take out the opponents – before they take you out of course. Here’s what Piran Jade, Stream Team Coordinator within our PR, Brand and Communications Team said about it:

A HoMM-style game with real-time combat – can that work? Oh, yes it can! With awesome magical items, interesting factions, and a map editor that produces random maps that are fun to play, Hero’s Hour is thoroughly entertaining. While I was originally skeptical, the game proved itself to me and I like how it puts its own spin on a classic idea. Sure, it has no story of its own, you play it for the enjoyment of the gameplay itself, but it’s light-hearted, quick, and I suddenly had 20+ hours in it.

This title is pretty used to being part of such summaries, as it has won over 50 game awards since it was released! In this open world RPG, you fight through Mordor and uncover the truth of the spirit that compels you, discover the origins of the Rings of Power, build your legend and ultimately confront the evil of Sauron. Whether you are a fan of Tolkien’s work, or just an action-adventure fantasy video games’ enthusiast, we are pretty sure you’ll love it. Maybe even just as much as Marcin, our Product Designer from Research and Design:

Mordor, Middle-earth, third age. You are Talion, a ranger of Gondor skilled with his sword and bow on a quest for vengeance. During your adventure, you sneak up on a camp of orcs, plan your entrance and select your targets. You are stealthy and swift, taking care of the guards at the side entrance. You move in the shadows and across the rooftops. You come close to your target taking careful aim for a precise strike… and just as you release the string of your bow to deal a blow to one of the orc captains, you are grabbed and hurled across the battlefield by Mormog Storm-Bringer, your nemesis. An epic battle ensues. The emergent gameplay in Shadow of Mordor combined with its deeply satisfying combat make the game an unforgettable, personalized experience. Definitely worth checking out.

Cult of the Lamb

All bow to the mighty Lamb God! This action adventure roguelike with managerial elements took the game industry by storm after its release. And it is incredibly hard to say which amazing element of this impeccable indie title we like the most: original setting, unique story, cast of out-of-this-world characters, or addictive gameplay that makes us never want to stop playing it. Who would have thought that starting your own cult in a land of false prophets, venturing out into diverse and mysterious regions to build a loyal community, and slashing your way through various dungeons could be that fun? Well, amongst many other, Paweł – our Software Engineer:

I am a man of a few words, and unmatched try-hard tendencies. Right from the start Cult of the Lamb seemed like a title for me. Mix of action and strategy provided by it, as well as its dungeon crawling and cult management elements just simply hit the spot for someone who enjoys roguelike titles. While playing, I just couldn’t get enough of the excitement generated by randomly chosen weapons and power-ups that made me switch my playstyle and find new ways to defeat enemies. Also, something about sacrificing your friends to an eldritch god in an unapologetically cartoonish and cutest world made me pick it as my favorite.

And there you have it – our team picks for the 2022’s best releases on GOG (at least some of them)! If you haven’t already, make sure to check those titles out, as we truly believe you won’t regret a minute playing them. And of course, take a look at the whole GOG GOTY Collection with special Winter Sale discounts. With so many great releases on GOG, we already can’t wait for next year. See you in 2023!